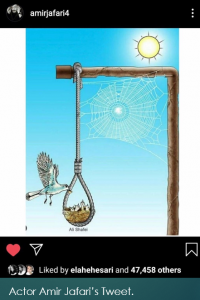 On 10 July 2020, the Iranian Judiciary announced that three men, namely Amirhossein Moradi, Saeed Tamjidi and Mohamad Rajabi, who were arrested in anti-regime protests in November 2019, were to be imminently executed as they had been denied appeal. Within three days of the announcement, the Persian hashtag #اعدام_نکنید (“Don’t_Execute”) started appearing on Twitter, Instagram and Facebook. By 14 July, the hashtag was trending globally on Twitter with many inside and outside Iran, including Western politicians and political activists, joining in support. As the Iranian regime always does when they wish to stop anti-regime online activity, they almost completely stopped the Internet inside Iran.  This is in spite of the fact that Facebook, Instagram and Twitter have all been filtered in Iran for years and access was only possible via VPNs, the use of which have also also banned since 2018. But perhaps by that stage it was already too late because by the evening of the 14th, the hashtag was number one worldwide until the 16th with over 4 million tweets at that time.  BBC Persian referred to the phenomenon as “millions marching on Twitter avenue”.  In Iran, a very large number of public figures, ordinary citizens and some reformist politicians used various social media to join the online campaign.

One noteworthy aspect of the campaign was the range of public figures who posted using the hashtag. Chief among them were many in the Iranian film industry which has been politically engaged as I have discussed elsewhere. Many key figures in Iranian cinema who supported the campaign have been outspoken critics of the regime at least since the Green Movement and their act of speaking out against the impending executions was expected. The social media enabled affective publics that were equally deliberative and emotive in their posts, ranging from pleas for clemency, warning to the regime, invitations to sign petitions against the verdicts as well as sharing fast-changing news (see sample Tweets in the figures [1]).

The campaign seems to have taken the regime by surprise. Up until 19 July, unsure of how to handle it, the authorities responded with denial and subsequent confirmation that the executions would go ahead as planned. Rabi, the spokesperson for Rohani’s  ‘moderate’ government warned the hardline establishment in an op-ed in Iran newspaper, “for the [Iranian] society, I can fully imagine the possibility of a social movement, the transfer of mental unrest to physical unrest”.

On 19 July, the campaign appeared to have achieved its objective as the lawyers of the three announced that the judiciary halted the executions and that it would re-examine the cases. The next day, acknowledging the online campaign, Raisi, the head of Iran’s judiciary announced, “we accept [the] protest and we should listen to [the] protest and deal with it logically, but protest is different from rioting which is the red line for the judiciary and no one should be allowed to create insecurity in the country.” This is significant since it is extraordinary for the high-ranking hardliners in the regime to acknowledge protests as legitimate. Raisi’s pronouncement also shows the regime’s understanding of the online protests as being precursors to “riots”, which denotes widespread street demonstrations, against which he warned.

To celebrate this campaign as a major victory for human rights in Iran, however, may be premature; at the time of writing, there are fears for the lives of many others on the death row. Indeed, this month,  Farid Afkari,  a well-known athlete, was executed in spite of a relatively smaller online campaign in his support. In addition, the fate of the above-named three may yet be sealed when the current attention on the topic is diverted to other issues. Lasting change in human rights conditions in Iran may be far off. Nevertheless, hope in online campaigns is evident and this campaign may only be the beginning of more radical changes along the way.

The relationship between social media and social movements has been of much interest, scholarly and otherwise. Whether Facebook was instrumental to the so-called Arab Spring 0r Twitter for the 2009 Green Movement in Iran has been the subject of various proclamations and reactions. For example, during the 2009 Green movement, the then US President Barack Obama asked Twitter to postpone a planned a temporary shutdown to overhaul its service because of the negative impact that he perceived the shutdown would have on the Iranian protests. However, when optimism about movements wanes, the same goes for the interest in the role of the media in them. In Iran, online campaigns for human rights have been of smaller scale and had little success so far, that is until this particular campaign over the summer. 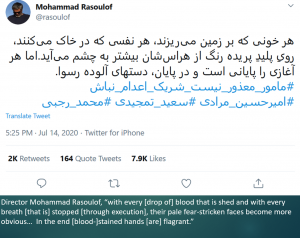 For scholars of media where debates oscillate between pessimists and optimists about social media’s potential, the Iranian case is useful not the least because of its relevance for activists seeking to disrupt power from below.  While it is true that making assumptions is premature, the fact that activists continue to mobilize affective online campaigns underlines the potential of social media for political engagement.

Centre for Global Media and Communications

[1] I am grateful to Mahtab Saadatmandi (graduate student, MA Global Media and Communications) for her assistance with the research on social media posts.