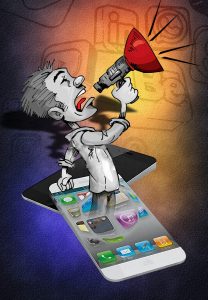 I am glad to announce the publication of a Special Issue on Global Digital Cultures and Extreme Speech published in the International Journal of Communication.  This is the outcome of a five-year collaboration with colleagues across the world committed to advancing a more comparative perspective to ongoing debates on online hate speech and violent online political extremism — and most notably collaboration with Professor Sahana Udupa at the Digital Dignity Project, at LMU Munich.

In the Special Issue, we explicitly advance a new research agenda premised around three different theoretical interventions into the current debates and research around this controversial yet timely topic:

First, extreme speech foregrounds the radical situatedness of online speech acts in different cultural, social, and political milieus globally. It takes seriously the cultural variation of speech acts, the normative orders bundled around them, and the historical conditions that underpin them. This implies that there is no easy-to-define boundary between speech that is acceptable and speech that is not. The distinction is instead constantly reworked in public and political debates, and the boundaries are redrawn, used, and misused. As a concept, extreme speech captures digital cultures that push and provoke the limits of legitimate speech along the twin axes of truth-falsity and civility-incivility, raising two critical questions for research: What are the processes that make hateful and aggressive language acceptable for its users—and indeed make it appear normal and desirable—and, conversely, how is the order-word of hate assigned to speech acts online as a weapon of authority and control?

… Second, extreme speech draws ethnographic attention to global online media affordances as a sociotechnological dynamic that deeply affects online speech acts, including cultures of vitriol, aggression, and abuse. Without falling into the trap of technological determinism—a perspective abandoned by the very frame of media “practice” we embrace—we nonetheless emphasize aspects of online use that have gained resonance on a global scale as they manifest across different cultural contexts. What features of new media cultures help create an enabling environment for hostility and provide a pool of resources to draw on to further fuel this hostility? What kinds of sociotechnological forms are available on new media platforms that facilitate vitriolic exchange, and what are the cross-cutting thematic patterns that spread across global instances of hateful speech online?

… Third, extreme speech is inextricably linked to violence, but its implications are context specific. At a fundamental level, the concept builds on the premise that political action should be considered, among other things, as an aspect of situated speech acts and what Judith Butler (1997) considers as the realm of linguistic performativity. Public ideals and their brutal decimation are morally laden and enacted through speech acts encompassing verbal and audiovisual expressions. Furthermore, the concept insists that the connection between extreme speech, political hatred, and violent action must be ethnographically explicated.

My contribution to this special issue – A Comparative Approach to Social Media Extreme Speech: Online Hate Speech as Media Commentary – embarks on a philosophical detour around debates on online hate speech and makes the case for a comparative approach problematising this object of study by nomadically moving across sometimes radically different media environments in countries such as Ethiopia and Finland.  I argue that:

What is curious when approaching online hate speech from such a comparative perspective (e.g., how the lessons learned in one context can be applied to a different context) is how differently debates are discursively framed depending on the part of the world that is the focus of the research (Jackson, 2012). With the risk of caricaturing or simplifying what in reality consists of a range of different and often incommensurable theoretical positions, when the question is about online hate speech in the West, the problem seems to be framed more in terms of a “discourse of pathology” that divides the social world into a mainstream center and an extremist periphery. From this perspective, the problem of online hate speech becomes more about identifying where the boundary between acceptable and unacceptable speech is drawn and who should be excluded from the legitimate sphere of political expression. However, when the debates focus outside the liberal West, and in countries such as Ethiopia, the problem of online hate speech is often framed more from the perspective of ethnic or political conflict and its mediation. The underlying metaphor here, in contrast, divides the social world into two (or more) parallel sides involved in a conflict situation and a shifting zone of engagement through which peaceful solutions to the conflict could be found, and perhaps pockets of “spoilers” who are left out of the peace process because they are not willing to enter a peaceful solution or actively try to provoke violence to derail solutions to conflict (Stedman, 1997).

The problem of online hate speech, therefore, becomes as much about finding ways to mitigate the social and political tensions underlying such expressions of hatred as it is about determining what kinds of speech acts are acceptable and what is not—as perhaps has been more common in the historical genealogy of hate speech debates in the West revolving around questions of freedom of speech.