2018 was the year of ‘big, fat Indian weddings’, from Bollywood-sweethearts Deepika Padukone and Ranveer Singh’s destination wedding in Italy, to actor Priyanka Chopra and musician Nick Jonas’s ‘intimate’ wedding with only 200 closest friends and family, which naturally included the Indian Prime Minister. However, the year ended with the biggest Indian wedding: oil-and-telecom conglomerate, Reliance Industries’s heiress, Isha Ambani, and global conglomerate Piramal Group’s heir, Anand Piramal. Their grand ‘pre-wedding’ celebrations at a royal-palace-turned resort in Udaipur, Rajasthan, included a performance by Beyoncè, while the wedding ceremony held at the Ambani residence saw the President of India as well as the former US First Lady, Hillary Clinton, in attendance.

The ‘big, fat Indian wedding’, now a commonly-accepted tradition, is a construct from the late-1990s, when the rise of global capitalism and the opening up of the Indian economy facilitated the creation of the Bollywood film industry led by key production companies. In a country of extreme economic inequality and cultural diversity, Bollywood studios capitalised on the consumerist desires of the North-Indian middle-class population and found a means to sell invented traditions through cinema. This was facilitated by the rising neoliberal Hindu right’s ideology of cultural nationalism—Indianness itself was defined by the Bharatiya Janata Party government, its rhetoric disseminated by what Ashish Rajyadhaksha calls ‘the Bollywood culture industry’.[1] Indianness now consisted of primarily Hindu religious traditions; anachronistic and patriarchal rituals; and an obsession with family values and social status, and thus was born the ‘big, fat Indian wedding’ on screen: the mundane sanctity of the institution of marriage and their ceremonial importance was upgraded to an exuberant show of wealth, projecting the Indian wedding as an urban and elite fantasy. Bollywood wedding films such as Sooraj Barjatya’s 1994-film, Hum Apke Hai Koun..!  and Aditya Chopra’s 1995-film, Dilwale Dulhania Le Jayenge continue to be the most popular and highest-grossing Indian films of all time, especially across the diaspora as they translate “Indian culture” onto celluloid for those outside the homeland to imitate.

The homogenisation of wedding traditions in the dominant media industries established Punjabi Hindu rituals as the norm, while many ceremonies fabricated in Bollywood films were now accepted as traditional: such as the sangeet, a pre-wedding song-and-dance competition; or the ceremony of applying mehendi dye to a bride’s hands. Bollywoodization has resulted in a thriving wedding industry with new sectors within the wedding business, such as wedding planning and management companies, who offer to curate Bollywood-inspired weddings for clients, involving choreographed dance numbers, a full itinerary of ceremonies from Bollywood films and even five-star hotels and renovated historical buildings as exotic wedding venues. Bollywoodized weddings not only exclude certain economic sections of society but also other minorities in India from the religious, cultural and linguistic singularity of the Hindu Punjabi wedding traditions. It is thus increasingly impossible to deny the politicization Indian culture. 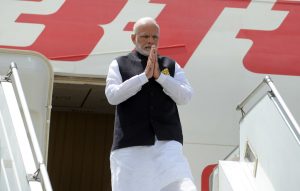 “Arrival of Narendra Modi, Prime Minister of India” by G20 Argentina is licensed under CC BY 2.0

2018, the year of Indian weddings, was also the final year for Narendra Modi, the Prime Minister and leader of the BJP, to garner political support for the impending general election. For Modi, the Bollywood weddings thus also doubled as the photo-op, a platform to consolidate his close ties with Bollywood elites and project himself as Bollywood’s endorsement on social media platforms across the world. The BJP has sustained its votes on the basis of cultural nationalism, anti-secularism and neoliberal economic policies and in the results of May 2019, Modi’s government saw an overwhelming increase in their existing national majority. What does this mean for the future of India, where the BJP’s ‘New India’ campaign based on blatant Islamophobia and extreme deterrence measures, was clearly well-received by voters and supported in Bollywood cinema? What does it mean to be included in the New India, and at whose expense?

Main image credit: “A Punjabi Wedding in Delhi” by India Kangaroo is licensed under CC BY-NC-ND 2.0