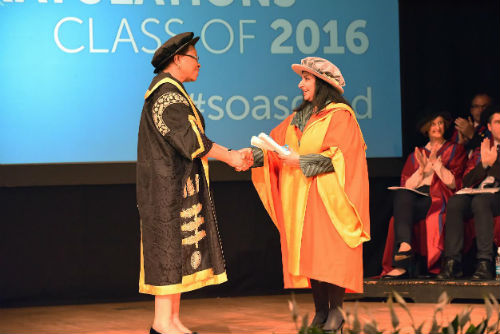 Award-winning poet, artist and documentary film-maker Imtiaz Dharker, renowned for her work centring on freedom, cultural intolerance and gender politics, was this year awarded an Honorary Doctorate at SOAS University of London.

In SOAS’ 100th year she delighted the audience at the 2016 graduation ceremony with her poem ‘The Elephants have come out of the Room and on to the Piccadilly Line’ that was in praise of SOAS.

in praise of SOAS

The elephants are travelling underground,
tilting gently as the train careens.
No-one sees them, all the heads bent down
to worship information on small screens.

Perhaps the elephants wonder at how still
they sit or how the light shines blue through
human eyelashes, or admire their digital skill
on keyboards, too tiny for elephant toes, too

small for trunks. Google cannot contain
the wisdom of elephants. The whole of the internet
cannot trigger one spark in the elephant brain.
So they come swaying through Russell Square, to set