Five bicycles and one watch

Home/Uncategorized/Five bicycles and one watch

Five bicycles and one watch

Professor Adrian Mayer, 93, a major figure in the development of Indian social anthropology, shares his memories of rural India in the 1950s.  Speaking to Professor Edward Simpson, he reveals how studying a language at SOAS started a remarkable career, leading him to the South Pacific and to rural India.

When Professor Adrian Mayer joined SOAS in 1947 to study Hindi he had already spent two years in India, working in an NGO on famine relief and rehabilitation. ‘I worked in three main areas – in Bengal for six months, Kerala for six months and in several districts of the Madras presidency for a year.  So there wasn’t time to learn any language properly and I thought I’d start with the national one.’  The teaching was thorough, but it was based on somewhat old fashioned grammar books, which contained as examples such phrases as ‘get me some hay for my horse’.

He went to Fiji in 1950 on his first major project of anthropological fieldwork and found that his language ability was much admired. He said the Fiji Indians had come from north and south India as indentured labourers and they had adopted a sort of Hindi as lingua franca. ‘The language was very basic. They didn’t conjugate verbs, nothing like that.  Everything was expressed in imperatives. So they were both aghast and impressed at my grammatical purity’. 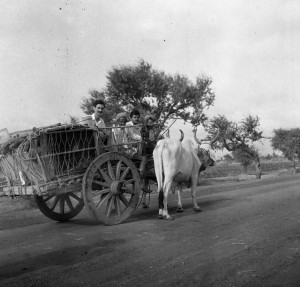 Later he did research in Madhya Pradesh, central India.  In 1954 villages of that region were very isolated.  ‘People knew little of the wide world.  They only went outside for an occasional visit to the market town or for weddings and funerals in other villages.  So I was treated like a man from the moon. “Is there grass in your country?  Are there cows in your country?”  I incautiously let slip that London time was different from village time and this was a brain-teaser because some people still believed that the earth was flat.  But others said that it was round, so I found that I could explain with the aid of an orange how the sun made time differences. In fact, most people were illiterate at that time.  But illiterate people read your face very carefully.  I found quite often they knew what I was thinking or what I was going to say before I said it.  It’s perhaps no coincidence that one of the greatest of the Indian emperors, Akbar, was illiterate.  He could have learned to read and write, he had no shortage of possible tutors, but I think he must have said to himself “No, I will read their faces while they’re talking and that will be far more rewarding.”’

Professor Mayer came to the SOAS department of anthropology in 1956, joining fellow anthropologists Frederick Bailey and Colin Rosser under the headship of Professor Christoph Fürer-Haimendorf.  ‘The department consisted of us four Indianists and one Africanist at that time.  We used to have a seminar each Monday afternoon, for which we three prepared ourselves at a friendly pub off Russell Square.  Each of us stood a round so we were fortified with at least a pint and a half when we gained the seminar table. We were young at the time and participated in the usual way, but I don’t recommend it as an academic technique.’ 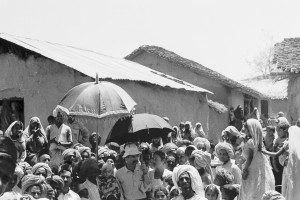 At that time the department was in one of the Woburn Square buildings in rather makeshift surroundings. ‘I remember that we had only one telephone, on the ground floor. Catherine Brown who was the departmental sectary would shout up to us on the third floor and we would come thundering down to take our phone calls.’

Over the years the School added other departments in the social sciences and in 1965 it was decided to institute regional Centres to facilitate inter-disciplinary cooperation.  Professor Mayer was the first chair of the South Asia Centre.  ‘Wondering how to promote inter-disciplinarity I hit on the idea of a seminar which would discuss books which overlapped disciplines.  I got together a dozen of these, persuaded speakers to introduce them, and announced a weekly programme.  Attendance was at first modest. But through some administrative quirk I had managed to provide a glass of wine during and another one after the seminar.  The grapevine did its work and thereafter we had a very satisfactory attendance and some excellent discussions.  I forget how long we continued like this, but eventually the powers that be relegated us to a cup of tea. But the going was good whilst it lasted, and it was an excellent way to get the Centre started.’

Over the decades Professor Mayer made several visits to his village of study, noting the changes taking place.  ‘In 1954 people had few personal belongings which one could call “modern”.  No radio, only five bicycles, and a single person had a watch.  He was rather proud of it and perhaps felt that it should be thought better than mine.  So when we met he always asked me the time, and if mine differed from his by a minute or two he would say ‘Your watch is wrong’. Over the years I watched as electricity came to the village, followed by transistor radios and then tvs, bottled gas stoves, and then of course mobile phones, motor cycles and cars, the lot.’

Professor Mayer retired in 1985, but he kept in contact with the village and planned a full re-study.  ‘I thought that I would return and make a proper study of what had happened, and “50 years later” seemed to me to be a good round figure.  Unfortunately I wasn’t able to go to India at that time, so I wrote to SOAS and asked if anyone was prepared to take this over.  Luckily Edward Simpson took the ball I had tossed him and ran with it.  He organised a project and we appointed an excellent person to do the restudy. He and I have worked closely together – he read all my diaries and field notes before going out, though it took some time for him to decipher my handwriting. The villagers considered him at first to be my son, though when I went out and spent a few days with him they re-named him my disciple!’

With a legacy spanning over half a century of research and teaching, Professor Mayer ends the interview not wanting to speculate on what he has contributed to the field of social anthropology (‘that’s for others to do’), but knowing that his career has given him not just an interesting life but a rewarding one.

Professor Mayer’s work was recently featured in ‘The future of the rural world? Indian villages 1950-2015’ exhibition at SOAS’s Brunei Gallery.  The exhibition, curated by Professor Edward Simpson, displayed for the first time the long-term study of three Indian villages and encouraged visitors to think more broadly about the possible future of the rural world, giving an extraordinary insight into rural development in India.