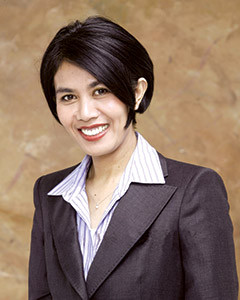 Desi Anwar is a renowned Indonesian national broadcaster in television journalism and news production. Ms Anwar was born in Bandung, Indonesia in 1962 and studied for her BA in French and European Studies at the University of Sussex. She is a SOAS alumna and holds an MA in Indonesian and Malay Studies. Ms Anwar started her television career as a reporter, anchor and producer with Indonesia’s first commercial television channel and pioneered the country’s leading prime time news programme ‘Seputar Indonesia’.

“My path was actually accidental.” Desi Anwar tells us about her journey from being a student at SOAS, to becoming a renowned Indonesian national broadcaster.

Desi holds an MA in Indonesian and Malay Studies from SOAS and credits her time at the School for reviving her interest in Indonesia.

“When I attended SOAS, I had spent most of my life and my education in England with only very few opportunities to visit Indonesia. Being exposed to Indonesian books, writings and magazines at the SOAS library, made me feel that there was a whole world out there that I knew very little about, and it was my own home country.

“Although I gathered some work experience in England and did not plan on returning to Indonesia for good, somehow at the back of my mind I knew that eventually I would pursue my career in Indonesia.”

Desi’s connection to SOAS though, stretches back further. Her father, Professor Khaidir Anwar, was a lecturer at SOAS, her mother worked as a librarian and even her older sister went to the School.

“That was the reason I decided not to go to SOAS for my first degree. Instead, I settled on Sussex, which was a reasonable distance away from home.

“When I graduated, a SOAS librarian called and asked me if I could help fill in a post as library assistant for the South East Asia section. I accepted as I was familiar with the university’s environment and quite fond of the library. I used whatever spare time I had to read the Indonesian literature there and was invited to apply to do a Masters by the current lecturers then. And I did!”

Desi returned to SOAS in 2013, when she was awarded an Honorary Fellowship for her achievements in broadcasting.

“After finishing my MA, I went to Indonesia on holiday after having lived in England for almost 16 years. In Jakarta, I was asked by a friend to replace her as English news copy editor at the Antara Indonesian national news agency while she went on maternity leave. Since I was in no hurry to return to England, I worked at Antara for a couple of months

“At that time, a new private television station was set up called RCTI. It was still a subscription based channel available for subscribers in the Jakarta area. A contact encouraged me to apply, so that’s how I ended up in RCTI.

“A few months after I joined the Public Affairs section, producing a weekly TV magazine on human interest topics in Jakarta, the station went free to air, initially to the greater Jakarta area, then to the main cities around Indonesia and becoming a national television station in less than a year. By then, the Public Affairs department became the News Department, and we produced many daily news bulletins.”

Desi is the host of the popular show ‘Face2Face with Desi Anwar’ and has interviewed many inspiring and influential figures, favouring the one-to-one format.

“Over the years, I anchored various talk shows on politics, the economy and current affairs in Indonesia and I became concerned about the lack of international perspectives provided for the audience. I produced ‘Face2Face’ to give the Indonesian audience thoughts and ideas from prominent and inspiring international figures. “

Desi explains: “A one-on-one interview is the most satisfactory format to really gain insight and information directly from a person, and it’s an opportunity for myself as well as the audience to learn from that person’s experience and expertise.

For SOAS students and alumni wanting to embark on a career in media, Desi has some sound advice: “If you’re an international student, you might want to go back to your home country and be part of developing something new, especially if the media industry is still growing.

“Your English language skills, international exposure and experience also make you an ideal person to begin a career as a stringer or even correspondent for an international cable channel.

“For TV journalism, it is important to be smart, articulate, curious and a quick thinker. However, if journalism interests you most, there are many ways of honing your skills and getting your work out there, including blogging, contributing your stories to various publications and writing news stories for the local radio stations. You can even set up your own online publication or channel on YouTube.”

Desi’s interest in international perspectives is highlighted when discussing how she would like SOAS to look in 100 years’ time: “Be the place where students can learn everything about the countries of Asia and Africa, including the languages (however obscure and however few the number of students!) and be the treasure trove and repository of all the knowledge of those various countries which can easily be accessed.”

Ultimately, Desi recalls the library as the highlight of her time at SOAS. When asked what her favourite memory was, Desi stated:

“Funnily enough, shelving books at the library, manning the reading room and working at the book checkout counter!”