A month after SOAS’s first international centenary exhibition Everlasting Flame, Zoroastrianism in History and Imagination opened at the National Museum in Delhi educational events and guided tours are well underway. In addition, the diary for school visits, themed walks and workshops for families is already booked through until the exhibition closes on 29th May. Below are pictures from a school visit on Saturday 16 April. 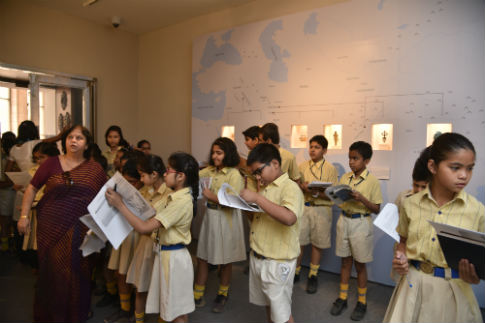 Behind the group pictured above is a map of the ancient world stretching from Egypt, through Mesopotamia, Iran and Western Central Asia to the Indus Valley. Inserts show objects from pre-Zoroastrian civilisations across the region including a naked female figurine probably from Susa in Iran, dated 1500 – 1100 BCE, a foundation document from Uruk dating from the Old Babylonian period, an iron-age bronze horse-bit from Luristan dating from the 9th-8th century BCE and a bronze and turquoise ornament of the Vedic deity, Indra. 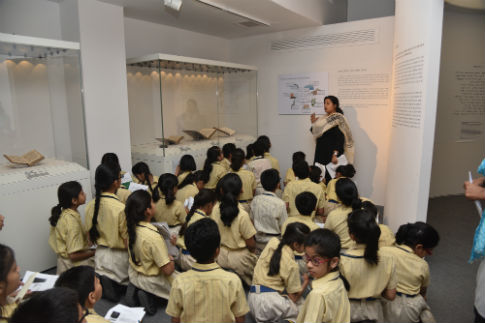 Here students learn about the Zoroastrian creation story with reference to a wall chart drawn by SOAS student Alexandra Buhler. The doctrine of the Amesha Spentas – divine beings who, together with Ahura Mazda, created the world in a state of perfection – is central to Zoroastrian theology. It is a useful introduction to the sacred texts in Avestan and Pahlavi languages on display in the exhibition gallery.

The educational programmes at the National Museum are innovative and interesting. I have been fortunate to be able to experience and contribute to their development since arriving in Delhi in January to work with the National Museum Outreach Team. We chose ‘highlight’ objects from each of the ten sections of the exhibition to be the focus of the guided tours. Captions and wall panels, together with the Catalogue and its new Supplement, provide a wealth of additional information. 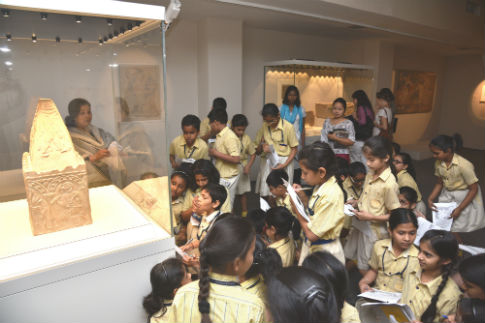 Zoroastrian eschatological ideas are explained here with reference to an ossuary from Mulla Kurgan, near Samarkand, dating from the 7th century CE. The lower register shows priests wearing the mouth covering, padam, performing a ceremony in front of the fire, while the upper register evokes a scene from paradise that shows astral symbols and two dancing girls. 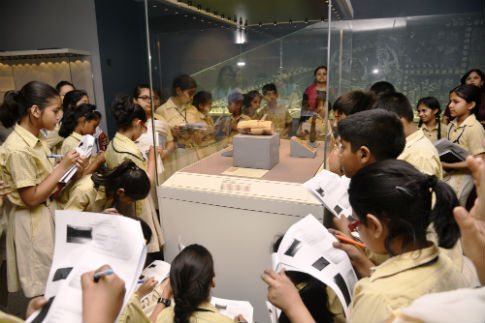 Students cluster round a case that displays objects from the Achaemenid period including a replica of the Cyrus Cylinder made by the British Museum courtesy of Farrokh K. Kaverana. The original was found in 1879 in Amran, Babylon, where it had been buried as a foundation deposit marking the capture of the city by the Persian king, Cyrus II, in 539 BCE. In Babylonian cuneiform, the inscription records the liberation of the city from the tyrant Nabonidus.

With over 350 objects in the exhibition, the task of encapsulating the information in a meaningful way, for different age groups, is a challenge that the National Museum staff and volunteers have tackled admirably. The four thematic walks, designed by the Department of Education, are based on objects in the exhibition. With talks in Hindi and English, the walks start with a PowerPoint presentation (shown in the picture below) and a tour of the gallery followed by discussion. The four themes are a) the ancient world and trade b) funerary practices c) costumes and textiles and d) legends and fables. 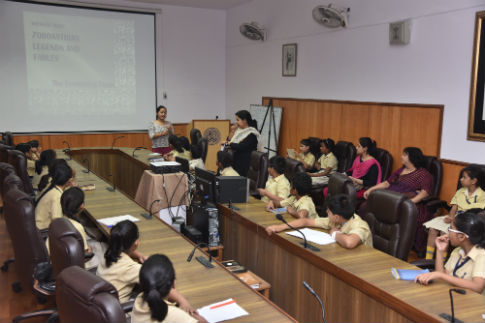 Rige Shiba, pictured standing to the right of the screen, is in charge of the educational outreach programme and has put together the interactive workshops – one of which is centred on the great Persian epic, Shahnamah, and the subject of oral traditions. She explains how storytelling is an effective and exciting means by which to capture the imagination of young audiences as well as stimulating their curiosity and encouraging them to connect the tangible and intangible traditions of a community.

These programmes are one of the more rewarding aspects of the exhibition insofar as they are providing authoritative information about Zoroastrianism to a predominantly non-Zoroastrian audience. For further information on the programmes go to: