In 1942, after efforts to alert the War Office to the shortage of Japanese speakers, SOAS had started putting together Japanese language courses for the Armed Forces. When the war broke out and requests for personnel suddenly became urgent, short courses were quickly organised to provide service personnel with very specific skills. The story of some of these war-time students has to some extent been documented, and the special cohort known as the “Dulwich Boys” recently celebrated. However, it was only in the course of this celebration, literally in its last minute, that a serendipitous remark by a member of the audience offered a glimpse into a slice of history that had been forgotten. Service women had also been trained at SOAS and, as is often the case, they had made a contribution which had never been fully recorded. 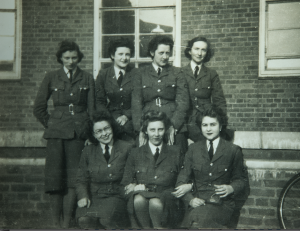 A group of seven women serving in the Women’s Auxiliary Air Force (WAAF) were recruited to study Japanese at SOAS in 1943, to be then sent to work in assistance of the war effort.  They were told they may be posted to the Far East, but instead they ended up in the very hub of British code-breaking, Bletchley Park.

The seven WAAFs – Mary Wisbey,  Eileen Clark,  Evelyn Curtis,  Cicely Naismith,  Denise Gifford-Hull,  Margaret Brabbs and Peggy Jackson – were enrolled in a short Japanese course specifically designed for the RAF.  Their training in Japanese language consisted of six months (only three months for Mary Wisbey) of intensive study of military terminology and documents, with no digressions into frivolities such as greetings or basic conversation routines. They were tested every two weeks, and failure to achieve 75% of correct answers meant they would have to leave the course. They practiced their Japanese characters on small flash-cards on the bus to and from SOAS daily, but were not allowed to take any other material outside of the classroom. Later at Bletchley, they were all assigned to separate blocks working on various aspects of Japanese code-breaking.  Mary Wisbey updated the Japanese call sign index and Eileen Clark helped produce a dictionary of Japanese military terms. The seven WAAFs became life-long friends, meeting regularly as a group for over fifty years.  Quite remarkably, they never discussed any details of their work with one another, until the 50th anniversary of their meeting.

Bletchley Park was not just focused on German codes, and two-thirds of the Bletchley workforce were women. The “Jappy WAAF”, as the seven girls used to call themselves, were never sent to the war front, and never visited Japan. From the days of their Japanese course at SOAS, they worked in secret and kept that secret for most of their lives, among themselves, and with families and friends alike.

Barbara Pizziconi and Helen Macnaughtan wish to thank Valerie Salmond and Adrian Barker for bringing this piece of history to the attention of SOAS and the wider community, and for the photo of the “Jappy WAAF” taken at SOAS.  Barbara and Helen will be writing a further piece on this story following an interview with the sole surviving SOAS Bletchley Girl, Mary Every (née Wisbey).