‘It is largely through her work and her personality that the African Department of the School of Oriental and African Studies, University of London, has become a world-famous institution in the field of African linguistics. Her name will forever be connected with the study of African languages, and in particular of African tone languages’ Diedrich Westermann, the German missionary and African linguist, who collaborated with Ida on a number of essays and books.

‘The practical depends on the scientific, for one can never tell what practical problems—or solutions of problems—will be thrown up by meticulous scientific analysis…..‘on the other hand, the practical application of scientific research keeps the researcher within bounds, as it were, and will not allow him too far into the realms of conjecture and theorising’ – Ida Ward in the publication “STUF – Language Typology and Universals – Volume 3, Issue 1-6 – June 1949 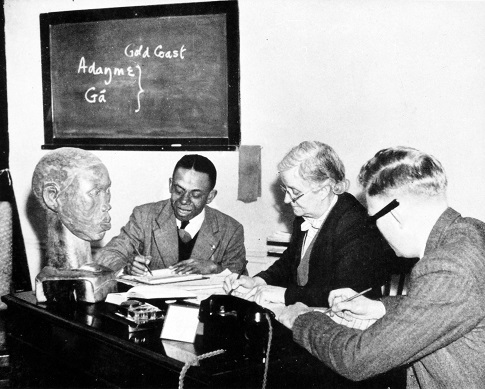 Ida Ward was one of the first scholars to carry out advanced and comprehensive work in the field of African languages. Her areas of study were phonology and tonology and her 1933 collaboration with Diedrich Hermann Westermann, ‘Practical Phonetics for Students of African Languages’, was reprinted many times. According to Westermann she had ‘an unfailing ear’ and the ability to reproduce foreign sounds and new sound sequences on paper; this is what made her the ultimate phonetician. She linked all her work constantly with practical language study and although she travelled, she was able to study many African languages at home because of the many African students and scholars coming to SOAS by the 30s. The African languages she studied included Efik, Igbo, Mende and Yoruba.

Ida Ward was born in Bradford in 1880, the eighth child of a Yorkshire wool merchant. From a school in Bradford she went to the Darlington Training College and later to Durham University, where she graduated B.Litt. with distinction.

After sixteen years of teaching in secondary schools, she joined the Phonetics Department at University College, London, in 1919, and soon established herself as an authority in the phonetics of the main European languages and in the study of speech defects. Noteworthy works of this period are A Handbook of English Intonation (written in collaboration with the late Lilian E. Armstrong), The Phonetics of English, and Speech Defects, Their Nature and Cure.

It was while lecturing at University College to missionaries that her interests turned towards West African languages—Kanuri, Igbo and Efik were her first fields of African research—and her first major work, The Phonetic and Tonal Structure of Efik (for which the University of London awarded her the D.Lit. in 1933), threw a new light on the study of these languages, and showed that intonation, that element hitherto so elusive, was one that could and should be studied if justice was to be done to African languages.

Westermann was of the view that her important discoveries were the immediate outcome of her teaching, at which she was devoted, enthusiastic and patient. “A group consisting of herself, an African assistant, and a small cluster of students was her ideal; here all were partners in the same aim, and all took an active part in the subject discussed.”

By the mid ‘30s she had lectured in many European universities and her distinguished gifts were known and appreciated in Europe and America. In ‘32 she became a lecturer in the African department at SOAS and by ’37 was the Head of Department where she remained until 1948. She was working at a way to produce a written form for the Asante-Akan languages when she died in Guildford Hospital in 1949, just after her sixty-ninth birthday.