Edith Penrose, world-leading economist who drove the study of social sciences at SOAS

Home/Uncategorized/Edith Penrose, world-leading economist who drove the study of social sciences at SOAS

Edith Penrose, world-leading economist who drove the study of social sciences at SOAS

”I don’t take sides. I just gather the facts and if people don’t like my work, they just don’t like the facts” Dr Edith Penrose – 1976.

“Edith Penrose was a visionary whose work contributed to a new general theory of the growth of firms.  The scale of her contribution can be gauged by its influence on current research in management and economics and by the fact that the practical lessons that flow from ‘The Theory of the Growth of the Firm’ remain as relevant today as they were when it was first published in 1959,”  says Professor Christine Oughton, Professor of Management Economics and Head of the Department of Financial and Management Studies at SOAS.

She also had a profound impact on the development of social sciences at SOAS, according to Professor Laurence Harris, who says “Edith Penrose’s perspective was international and engaged, as exemplified by her study of large multinational oil corporations (the seven sisters), the economies of the Middle East and questions of economic development. At SOAS her leadership in the 1960s and 1970s laid the foundations for research and teaching in economics, development studies, management and strategy.” 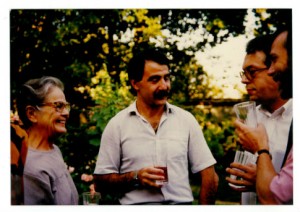 Edith in discussion with colleagues

Edith Penrose was a huge figure in three different spheres, all of which were, in her time, totally dominated by men – these were academia, business and the oil industry.  She not only laid the foundations for the way economics was studied in the West but she was also, without doubt, one of the very top oil economists in the world.

Her 1959 book ‘The Theory of the Growth of the Firm’ was about the ways companies grow and the reasons why they do; Jay B. Barney, professor of management at Ohio State University, called it “a seminal work focusing ‘the competitive implications of a firm’s internal strengths and weaknesses.”  In the field of economics it was an instant classic, is still relevant today and accepted as one of the most significant economics books of the 20th Century.  With currently over 20,000 citations, it established a new approach to the study of business and led to the development of ‘the resource based view of the firm’ – this new “view” was instrumental in totally changing the way management and economics were analysed by academics and people in business.

Penrose’s life leading up to The Theory of the Growth of the Firm was no less eventful.  Penrose – or Tilton, as she was born in the US in 1914 – completed her first degree in LA; she then moved to John Hopkins University where she completed an MA and then a PhD on the Hercules Powder Company, who made munitions.  All this was under the eye of the Austrian-American economist Fritz Machlup.  The thesis formed the basis for her later work on the growth of the firm.

It was at John Hopkins that she met Ernest Penrose, who held a chair in Economics and whom she married in 1944 after working alongside him in Geneva and Toronto; during and just after the war both Ernest and Edith worked for the US Ambassador in London as special advisor and special assistant respectively. 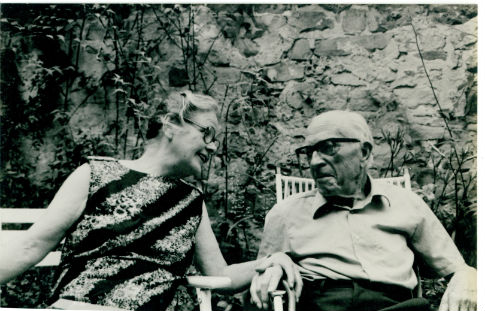 Edith and her husband Ernest Penrose

After returning to the US in the late 40’s they soon found themselves in idealogical conflict with McCarthy and his notorious Un-American Activities Committee.  Their study leaves in Australia and then, vitally for Edith’s career, at Baghdad University in 1957, were  partly a result of both Penroses speaking out against the blacklisting of a colleague.   Edith took up the post of Associate Professor of Economics in Baghdad and started examining the oil industry – ”I was doing a book on multinational corporations, although nobody called them that in those days. Being in Iraq, it would have been rather silly not to concentrate on oil, wouldn’t it?”  The resulting work was published as ‘The Large International Firm in Developing Countries: The International Petroleum Industry,” in 1968.

During the ‘60s Edith divided her time between the LSE and SOAS, finally taking up a permanent position as Professor of Economics with special reference to Asia, which she held until 1978 with interruptions to go to Dar es Salaam in 1971-72 and Toronto in 1973.

Professor Penrose also worked at Templeton College, Oxford, from 1982 to 1985 and  Bradford University from 1989 to 1992. Somehow she managed to squeeze in seven years at INSEAD (Institut Europeen d’Administration des Affaires) in Fontainebleau between 1977-84, where she served as Associate Dean in her last two years.

‘Over the past 25 years or so, TGF [The Growth of the Firm] has become a canonical reference to the currently dominant resource, knowledge, and (dynamic) capabilities – based approaches to business strategy, and to a lesser extent to the theory of the multinational enterprise and International Business scholarship. TGF is also seen as seminal in (strategic) human resource management. Of recent, the book has been used as the basis of integrating and extending the now flourishing literature on strategic entrepreneurship’
Christos Pitelis –  Professor of Sustainable Global Business, Director, Centre for International Business and Management (CIBAM), School of Management, University of Bath – 2008