The SOAS language student who was a Soviet spy

Home/1960s, History, The World at SOAS/The SOAS language student who was a Soviet spy

The SOAS language student who was a Soviet spy 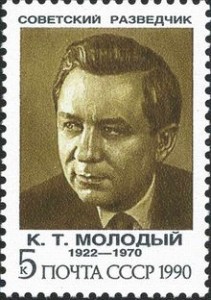 I entered SOAS in early October 1954, a raw young man from the Canadian Prairies. New to London, it took me several tours of Russell Square that foggy morning before a break in the mist revealed Senate House and I was able to make my way to the School. I had come to study the history of China, but because I did not have a classical language – essential for entry – I opted to study Chinese, a logical choice.

In 1954 the academic staff at SOAS outnumbered the registered students, most of whom could sit around the huge round table in the student common room. My Chinese language class was much larger than the five of us full-time students in attendance. It was supplemented by members of the Foreign and Colonial Offices, the RAF, the British Army and the Royal Navy. The course, three or so hours each morning, was taught by a tag team of instructors each with his or her own method, style and Romanization. I was seated near the back, next to Ralph Evans, who went on to achieve fame as British ambassador in Beijing and negotiator of the agreement on Hong Kong. He was known as ‘Evans, FO’ and I was called ‘the other Evans’.

I was introduced to Chinese history by Otto Van Der Sprenkel, a Dutchman who wore large, broad-brimmed hats. He was inordinately fond of the Marx Brothers, and in the lunch hour he could be seen heading for a restaurant with a crocodile of students in tow to whom he recited Groucho’s witticisms in Chinese. One of his favourites was ‘Shangdi ai yi ge yatz!’ (Lord love a duck!)

I have fond memories of fellow students and of the academic staff at SOAS. We all drew closer together during the Suez Crisis, united against the Anglo-French action. In particular, I benefited from the teachings of W.G. Beasley, Dennis Twitchett, Michael Loewe, A.C. Graham and Jack Gray. And, of course, Cyril Birch, who later went on to Berkeley, California.

January 1961 marked the beginning of my last months at SOAS. I was writing my thesis at home in an attic flat in Muswell Hill and came in only now and then for mail and lunch with friends. One morning, late in January, I found a letter in the open boxes in the Common Room where most of us foreign students received our mail. It was marked ‘STRICTLY CONFIDENTIAL’. On opening it, I found another envelope marked ‘PERSONAL, CONFIDENTIAL’. Inside was a typed note asking me to call a certain number because it was believed that I had some information of interest to Her Majesty’s Government. I went to a phone box on the corner of Russell Square, pushed Button A and shortly thereafter made my way to a nondescript building on the Thames side of Whitehall. There, I was seated facing a bright window, while my questioner, just a silhouette across the desk in front of me, paced back and forth. He wanted to know what I knew of Gordon Arnold Lonsdale, who had been arrested earlier that month outside Waterloo Station with a shopping bag full of microfilm showing details of the Britain nuclear submarine programme.

Gordon had been a language student at SOAS, a member of one of those mixed classes of Foreign and Colonial Office and armed service personnel, and I had been introduced to him when he first arrived because he was a fellow Canadian. When I had asked him where he was from, he said Edmonton. I said that that was a coincidence because that was where I was from, and I asked him what he had done there. He replied that he had been a used-car salesman, and he mentioned the name of a dealership that did not ring a bell with me. Subsequently, he cut me dead and avoided any conversation. He didn’t even offer me, as he did others, a partnership in his business scheme: looking after drink and cigarette machines on the US Air Force base at West Drayton. His classmates told of the wonderful parties he threw but noted that, although he frequently missed classes, due, he said, to eye problems, he was always on top of his studies. That was about all I could tell the man from MI5, before he told me the real story: how Gordon was not Canadian at all, he had never been to Edmonton (at last I knew why he snubbed me), he had collected his name from a child’s tombstone in an Ontario graveyard, and an obliging Ottawa office had issued him with a new Canadian passport. His trips to West Drayton were to meet his informant.

Gordon, a Soviet intelligence officer whose real name was Konon Trofimovich Molody, went to trial in May and was sentenced to 25 years as the biggest catch yet in the Cold War, later being swapped for Greville Wynne. He wrote his memoirs and mentioned his time at SOAS. He died picking mushrooms in some wood in Russia or Poland, a story that was confirmed to me in later years by a friend of his who became a friend of mine. Later, so I understand, my MI5 interrogator settled in Australia and wrote a book indicating that he had been a Soviet spy as well!

I received my PhD in May, shortly after Gordon was sentenced.

Brian Evans is a respected scholar of East Asian Studies and Professor Emeritus at the University of Alberta who has worked to foster greater understanding among the world’s peoples. His passion for China studies has benefited generations of students and his commitment to service has benefitted many community organizations. He is a Member of the Order of Canada.

This is an extract from an interview originally featured in the book SOAS: A Celebration in Many Voices, first published in 2007 by Third Millennium Publishing Limited. The full text is on the Alumni pages of the SOAS website.