Chinese whispers and the art of translation: interview with Göran Malmqvist

Home/1950s, Chinese literature, Leading voices, SOAS in the world, The World at SOAS, Uncategorized/Chinese whispers and the art of translation: interview with Göran Malmqvist

Chinese whispers and the art of translation: interview with Göran Malmqvist 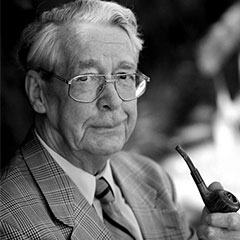 Professor Göran Malmqvist recalls SOAS in the early ’50s with some of the world’s most influential European sinologists during this time.

Professor Göran Malmqvist is a prominent scholar of Chinese language and literature and a highly prolific translator of Chinese literary works into Swedish. He is known worldwide for being the only Chinese speaker in the Swedish Academy, which awards the Nobel Prize for Literature. He translated work by both Chinese winners of the Nobel Prize for Literature, Gao Xingjian (2000) and Mo Yan (2012)

“It was a different world – an entirely different world,” says Professor Göran Malmqvist on his recollections of teaching Chinese at SOAS between 1953 and 1955.

“SOAS was considered a major centre and there was an equal concentration of classical studies and modern studies. We had regular staff seminars which were very, very useful. Members of staff took turns discussing what he or she was working on.”

Professor Malmqvist gained a BA in Chinese, Latin, and Anthropology from Stockholm University in 1948 and carried out fieldwork in China under a Rockefeller Fellowship in 1948-50.

“I decided to stay in Chengdu, which was taken over by the Communists between Christmas and New Year in ’49, but I stayed on and I had two years in China mainly doing dialect work.

While living in a Buddhist Monastery in the province of Sichuan right on the foot of Mount Emei, Professor Malmqvist became interested in the phonetics of Chinese whispering.

After returning from his fieldwork in China Professor Malmqvist received a letter form Professor Walter Simon, Head of the Department of Chinese, inviting him to join SOAS.

Here, he became part of a department with scholars Angus Graham, DC Lau, James Liu, Gordon Downer who were central in shaping the study of Chinese in Europe after the Second World War.

Angus Graham, despite being “a very strange scholar” who had “very deep thoughts on the Chinese syntax”, was “the most brilliant sinologist of his time,” says Professor Malmqvist.

“He was thought of as a philosopher, he was a sinologist and had a tremendous grasp of classical Chinese grammar. He wrote very little but what he wrote was crystal clear and magnificent.

“When students had exams, written exams, we sometimes went out pub crawling you know, Angus Graham and Gordon Downer – and several others – he was the soul of the party, pleasant, very pleasant.”

When asked what it was like being influenced by such world-renowned scholars, Professor Malmqvist recalls a “wonderful environment” and reiterates the importance of learning Classical Chinese.

“I don’t know how it is at SOAS but it has become lost in European universities we are talking about…  I am saying SOAS in 1953 was a different world and I have seen the deterioration of Chinese departments in European universities – Stockholm not least –  where I used to insist that students had a fair amount of classical Chinese Studies and also the grounding in the history of the Chinese language.”

His account of SOAS ends with a memory of meeting Harry Simon, Professor Walter Simon’s son, who was also a sinologist. “I met Harry Simon who was the son of Walter Simon – I happen to meet him in Kunming in ’49 and he was on study leave from Hong Kong and had made a visit to Kunming to visit his friend Major Ward.

“I happened to be in Kunming on vacation and stayed at the same hotel that Major Ward happened to be staying when he fell ill.  I went to see him in hospital and asked if I could do anything for him and he said I am supposed to meet an Englishman and took him to the hotel where I was staying. I had a bottle of 65% Maotai and I said to Harry – we had lunch together – perhaps you would like some wine with your meal. “Oh yes” he said. It took a long time for Harry to forgive me! He was not a drinking man really. The Soviet spy Gordon Lonsdale [who took courses at SOAS] and Angus Graham were… there was some pub crawling then!”

Read more fascinating profiles of SOAS alumni from every decade in the School’s history.