The Philips Building by Denys Lasdun – home of SOAS Library

The Philips Building by Denys Lasdun – home of SOAS Library

This week, Andy Davies talks about the distinctive home of the world-renowned SOAS Library and explains why the building should be given greater recognition. 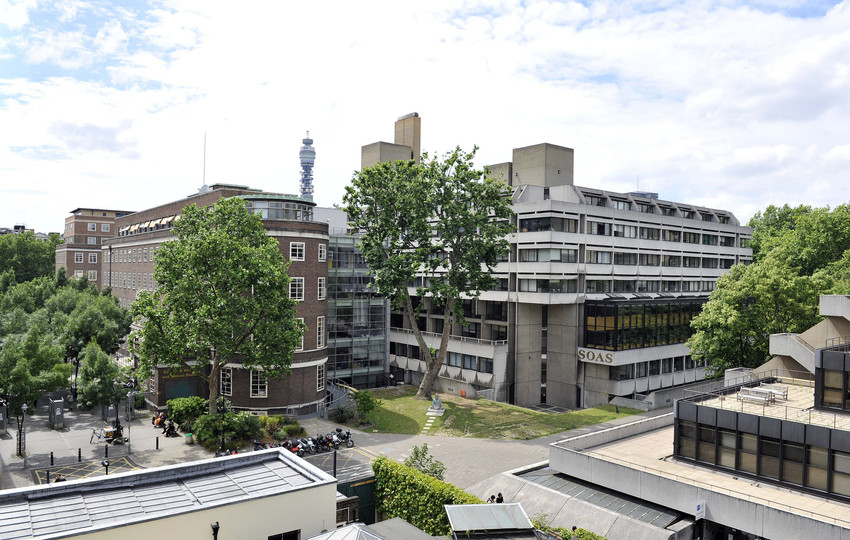 Denys Lasdun (1914-2001) was in the vanguard of modern British architecture.  A product of the Architectural Association, his talents grew under Wells Coates and at Tecton in the 1930s.  Perhaps most celebrated for his Royal College of Physicians (completed in 1964), his University of East Anglia (1968) and Christ’s College, Cambridge (1970) saw him develop a monumental, geological language reflecting his belief of architecture as the city in microcosm.  His design for the National Theatre on the South Bank (1976) famously drew sharp comment from the Prince of Wales, while enjoying far wider critical acclaim for his visionary treatment of the site.

Strangely, his extension for SOAS overlooking Woburn Square, completed in 1973 and later named for former director Professor C.H. Philips, is not widely considered among his best work, despite its particularly satisfying interior.  Lasdun had been recommended by Leslie Martin in 1960 to prepare the first detailed designs, including the ‘spine’ building along Bedford Way just to the east, to deliver Martin’s plan for a university precinct in Bloomsbury.  The scheme required the demolition of Georgian terraces and a bitter fight with student conservationists, culminating in a narrow decision at Convocation in February, 1969. 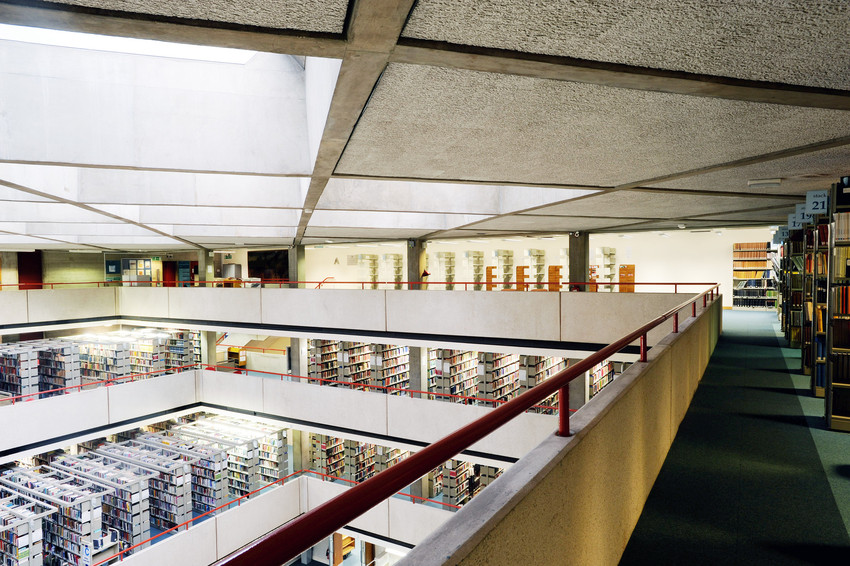 It is remarkable that Lasdun has produced a building of such quality, faced as he was with a succession of financial cutbacks from the University Grants Committee.  The structure, primarily a system of bold, pre-cast concrete elements hung around tall, in situ concrete service towers, makes a powerful statement without dominating its surroundings.  Its lack of a visible entrance (made via Charles Holden’s original SOAS building of 1940) adds to its citadel-like form, as does the dry moat around its perimeter.  But its stark, weather-hardened exterior belies a quite exquisite, benevolent environment within.

The heart of the building – a traditional, classical atrium, lit naturally from above by rooflights angled to the square – is quite breath-taking.  Layer upon layer of bookstacks arranged on trays tumble down to the reading room below.  It’s as though Lasdun cleverly anticipated the 21st century reading room, dominated as it is by computer terminals that now look completely integral to the design.  Over 200 rooms wrap around the atrium unseen beyond the bookstacks.

The ‘trays’ are unmistakably Lasdunite, a feature common to many of his buildings.  At the National Theatre he called them ‘strata’, geological forms rising from the earth, bringing outside and inside together.  Here, they only extend to the exterior on the south and west sides, the others having been ‘glazed-in’ in 2007, we’re told securing Lasdun’s blessing just prior to his death.  But it does seem like a compromise too far for such an iconic architectural statement, and one that the building’s listing in 2011 was sadly too late to prevent.

Andy is Director of London Universities Purchasing Consortium and a keen admirer of the work of Denys Lasdun, the architect behind the SOAS Library and National Theatre among others.