Home/1940s, 1960s, Challenging the status quo, Exhibitions, Leading voices, SOAS in the world, The World at SOAS, Themes, timeline, What SOAS means to you, Women at SOAS/SOAS centenary: Tell us what makes SOAS special

By |December 5, 2014|1940s, 1960s, Challenging the status quo, Exhibitions, Leading voices, SOAS in the world, The World at SOAS, Themes, timeline, What SOAS means to you, Women at SOAS|0 comments

In June 2016, SOAS begins a year (actually, 13 months!) of celebrations to mark 100 years of excellence in research and teaching.  An exhibition in the Brunei Gallery called ‘100 years of SOAS’ will play a major part in these celebrations by showcasing the School’s achievements.

On Tuesday 9 December, a 4-metre Timeline will be put up in the SCR. The Timeline was created in 2009 to engage our Honorary Fellows and Graduates with SOAS’ history, its people and collections. It includes some fascinating images and stories based on the images available at the time in the archives.

We know it is incomplete and there is so much more to SOAS’ story. We need your help to build a fuller picture – colleagues are invited to suggest seminal achievements and events in the School’s history and pay tribute to the people who have pushed the boundaries of academic thought and made an impact on the world.

We are seeking submissions under following themes:

Your ideas, suggestions, articles and images will be put forward to the curators of the ‘100 years of SOAS’ exhibition to be considered for inclusion.  Regular updates to the centenary webpages and this blog will reflect the range of submissions.

Please email your submissions to timeline@soas.ac.uk

In the meantime, here is a piece of SOAS’ history:

SOAS played a pivotal role in establishing African history as a distinct field of scholarship. Though the School had been founded to prepare officials for postings in Britain’s colonies, its Africa-related research and teaching broadened quickly, producing a step-change in critical approaches to the Continent and its past. 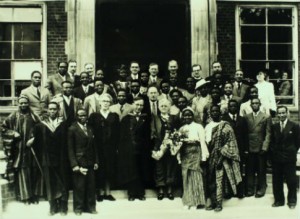 A major figure in development of the study of Africa was Professor Roland Oliver, whose interest in ecclesiastical history led him to focus on the historical impact of Christian missionaries in Africa. Professor Oliver’s research showed that there was no academic study of African history, only the study of Europeans in Africa. As eminent historian Hugh Trevor-Roper was to state so controversially in 1963: “Perhaps in the future there will be some African history to teach. But at present there is none, or very little: there is only the history of Europe in Africa.” It was Oliver who challenged that perception, becoming lecturer in the tribal history of East Africa at SOAS, a ground-breaking appointment which marked the beginnings of the contemporary academic field of African history.