To mark International Women’s Day, today’s blog comes from Dr Joanne Davis, an African literary scholar, whose research on Reverend Tiyo ‘Zisani’ Soga has led her to archives across the world. In uncovering and examining a unique letter by Soga’s mother, NoSuthu Soga Jotelo, Joanne has made a fascinating contribution to a new and developing online resource, One More Voice.

This International Women’s History Month, SOAS Special Collections presents a new project, One More Voice, which seeks to retrieve voices most prevalent in holdings across the archives, but which are nonetheless said not to exist. Earlier research for Livingstone Online, an affiliate project which SOAS Special Collections has supported since 2008, revealed that archives ostensibly ascribed to British explorers hold records for and of global people. These records concern people from contact zones who were engaged in some way in colonial spaces. They come from any place, any race, any class, gender, sexual affiliation; from all over the world. They lived within, engaged with, responded to, and resisted colonial structures. These voices and their owners are peripheral within the narratives of British travellers, but remain incontrovertibly enmeshed within them. As the name of the new One More Voice project makes clear, there is always ‘one more voice’ which remains to be read or recovered. 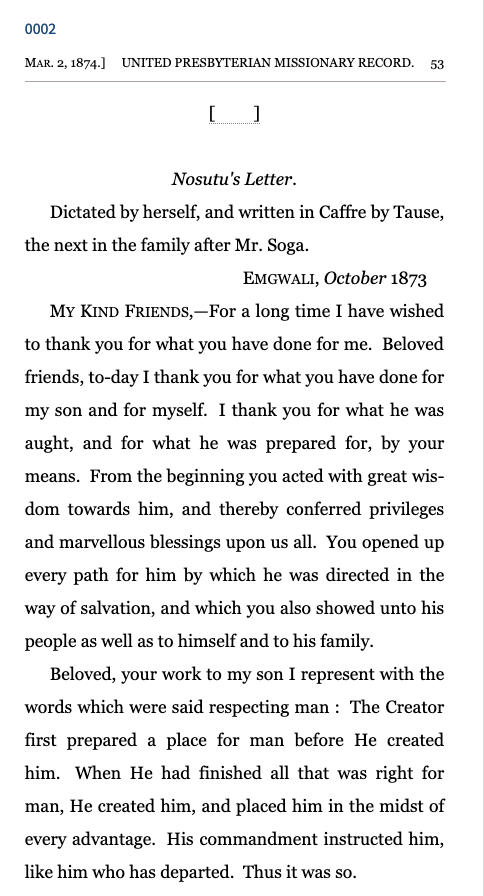 Portion of transcript of NoSuthu’s letter as rendered on the One More Voice site. The site strives to create digital facsimiles of archival documents as a means of suggesting continuity between the digital representations and the original artifacts.

My work for One More Voice has recovered a letter accorded to NoSuthu (c.1805-1877), an AmaNtinde Xhosa woman, and an early convert to Christianity, perhaps as early as the 1820s. In 1856 her son Tiyo Soga was ordained and became the first Xhosa missionary and one of the first black African missionaries, following his tertiary and theological studies in Scotland for the previous decade. NoSuthu appears in virtually every text about her son, but she never speaks, and only once is she ostensibly quoted (Chalmers 1872:6). As a result, this letter, penned ostensibly by herself, retrieved at New College Library at Edinburgh University after initial One More Voice research located a redacted version, was a great find. It is one of the earliest published letters written by an African woman. The archivists at New College library held the original in the Missionary Record of the Presbyterian Church. And how intriguing and exciting a text, which reveals so much about this 19th century Xhosa woman, NoSuthu, writing into the metropolis, transculturating as she goes. The presence of her voice in this Missionary Record of the United Presbyterian Church shows that she was valued and important in her milieu. With it, NoSuthu takes her place in this historiography. And most important, it means that she is present and can be found within archival holdings… when we look, we find her.

The main lead on One More Voice, Adrian S. Wisnicki, Associate Professor of English and Faculty Fellow of the Center for Digital Research in the Humanities at the University of Nebraska-Lincoln, decided to develop the project as a way of bringing to light a variety of such voices that were, effectively, hiding in plain sight in colonial archives. Wisnicki’s initial plans for archival research were thwarted by COVID travel restrictions, but in early 2020 he was already in discussion with the archivists at SOAS and several other institutions, and these archivists soon began to supply relevant sources for the project.

Despite NoSuthu’s presence, however, we cannot read her actual voice. It cannot be distinguished or extricated from two to four voices also resident in the text. In “NoSuthu Sends Thanks: Reading Voice in a Letter,” I discuss who NoSuthu is and explain how I read the text critically, how to decode that unpredictable name with which the letter is signed, and the critical and literary tools I bring to reading her voice. While we may not achieve an understanding of NoSuthu’s motivations, metaphors or interior world view/s, which may reveal some hint as to her subjectivity, should subjectivity exist, we still can confirm certain contextual details: her residence at Mgwali, her relationship with her daughter, the extent of her Christianity informed her identity, her peers and the community in which she lived. This knowledge permits us to imagine other details, and to perceive gaps to explore next. 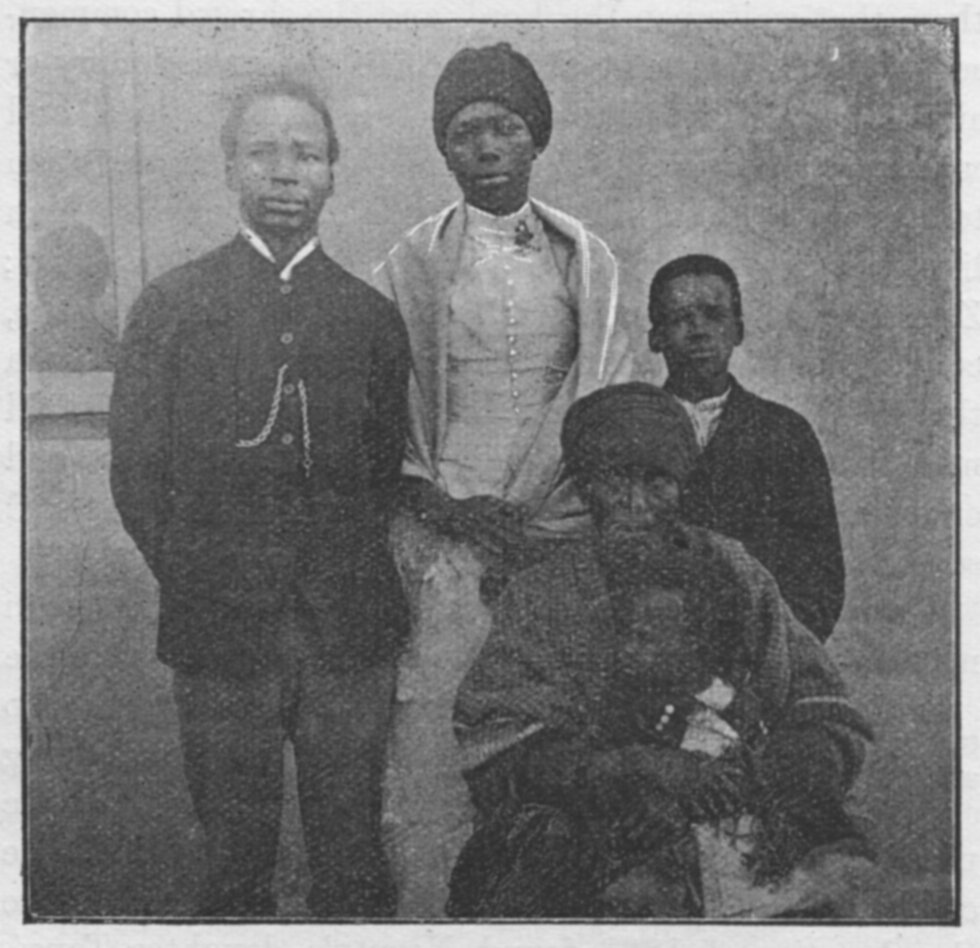 Tausé Soga and Her Family. Taken from ‘The Story of Our Kaffrarian Mission’, by William J. Slowan, Edinburgh: Offices of the United Presbyterian Church, 1894.

We then traced this picture (above) that names NoSuthu’s daughter, Tause, as its subject, and we wondered whether the seated woman in the front was NoSuthu and the standing woman was Tause. But from the date of this photograph and its place within the book, ‘1879-1894,’ I imagine that this seated woman is Tause, who was Tiyo’s elder sister and thus around 55 years old in that era, and the adults are her child and child-in-law, and then her grandchild. I know of no cameras in South Africa when Tause was a younger woman, not more than thirty years of age, and NoSuthu had died in 1877. But all of these questions remain. The work continues.

Anonymous, and Nosuthu Soga Jotelo. 1874. “Letter of Gratitude from a Kafir Woman.” Wesleyan Juvenile Offering: A Miscellany of Missionary Information for Young Persons, no. 89 (May): 54, 56.

Dr Joanne Davis is an African literary scholar, whose research on Reverend Tiyo ‘Zisani’ Soga has led her to archives across the world and to develop a passion for missiological literary history. She is a Research Associate at the Centre of World Christianity, SOAS, University of London,  where she is working with Soga’s biblical hermeneutics. She has just been appointed as a Research Fellow at the JIAS.