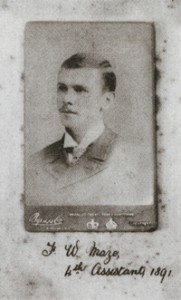 Frederick Maze (1871-1959) was the fourth, and last, British Inspector General of the Chinese Maritime Customs Service. Committed to preserving a unified customs service, Maze guided the Chinese Maritime Customs Service through a period of great upheaval in China’s history, successfully implementing a series of reforms which served to reshape the service.

Born in Belfast, Maze entered the Customs Service in 1891, and became in 1899 the Acting Audit Secretary at the Inspectorate General in Peking. From there, he moved quickly through the ranks becoming Acting Commissioner in Ichang in 1900, and Deputy Commissioner in Foochow and Canton from 1902-1904. After opening a customs house in Kongmoon, West River, 1904, Maze went on to hold a series of positions as Commissioner across China (Tengyueh [Tengchong ], 1906-1908; Canton, 1911-1915; Tientsin [Tianjin], 1915-1920; Hankow [Hankou], 1921-1925; Shanghai, 1925-1929). Appointed Deputy Inspector General of Customs in 1928, it was just one year before Maze replaced A H F Edwards upon his resignation, to follow in the footsteps of his uncle, Robert Hart, as Inspector General until 1943.

Maze found himself Inspector General serving under a non-unified government during a time of political, economic and diplomatic turmoil. He continued to run the service in Shanghai after the Japanese occupation in 1937, successfully negotiating with the Japanese and preventing them from placing their nationals in key positions within the Customs Service. He also introduced a programme of promoting and retraining Chinese personnel, progressively removing the need for the Chinese Maritime Customs Service to be foreign staffed.

Maze was dismissed as Inspector General shortly after the attack on Pearl Harbour in 1941 by the collaborationist Wang Jingwei government. Interrogated about the alleged use of custom stations in China for espionage, he was interned by the Japanese in the ‘Bridge House’, formerly the New Asia Hotel in Shanghai, along with almost 200 other British and American prisoners.

Released in 1942 and repatriated to Portuguese East Africa, Maze returned to China in an effort to help his staff still imprisoned there. He served in Chungking [Chongqing], where a temporary base for the Customs had been established, but after a few months resigned from the service on health grounds in 1943. The British Government awarded him a KCMG in 1944, and he also received numerous honours from other countries, including China, Japan, Belgium, Portugal, Norway, Denmark, France, and Germany, and the Vatican.

Maze was unquestionably successful in his policy of maintaining the Chinese Maritime Customs Service as a unit and in preventing its outright seizure by the Japanese; of the sixteen occupied customs establishments, only 4 had Japanese commissioners prior to Pearl Harbour.

In addition to his professional role, Maze was interested in, and helped to promote, many aspects of Chinese life and culture, in particular its maritime architecture. He assembled an unrivalled collection of scale models of Chinese junks and sampans, built in Hong Kong and Shanghai by Chinese craftsmen, and donated the collection to the Science Museum in London in 1938. He was also an honorary member of l’Association des Amis du Musée de Marine, Paris

The papers at SOAS (PP MS 2), donated in 1959, document  Maze’s work with the Chinese Maritime Customs Service during this turbulent time in China’s history. They include personal and semi-official letters, letter-books, reports and circulars, dated 1922-1943.

In addition to Maze, SOAS also holds papers relating to other prominent individuals associated with the Chinese Maritime Customs Service. Search our catalogue online, or have a browse through our finding aid to learn more. 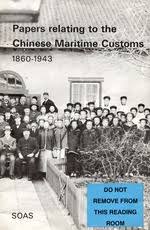