James Philip Mills (PP MS 58) was a pioneering anthropologist in the study of tribal communities in north-east India and the borders of Burma.

Born in Stockport, Cheshire,in 1890, Mills was educated at Winchester School and Corpus Christi College, Oxford. In 1913 he joined the Indian Civil Service and served in North-East India until 1947. He was Sub-divisional officer at Mokokchung in the Naga Hills of Assam from 1917-1924 and Deputy Commissioner, based at Kohima, during the 1930s.

Mills began to study the anthropology of the region, realising that by understanding the culture of the communities he had been appointed to administer, rather than imposing alien western values on them, it would help him to carry out his work effectively. His first monograph, The Lhota Nagas, was published by the Government of Assam in 1922, followed by The Ao Nagas in 1926 and The Rengma Nagas in 1937. In 1930 he was appointed the Honorary Director of Ethnography for Assam, and in 1942 he was awarded the Rivers Memorial Medal of the Royal Anthropological Institute for anthropological fieldwork among the Nagas. In 1943 he was appointed as Advisor to the Governor for Tribal Areas and States, with overall responsibility for tribal matters in North-East India. This appointment enabled him to travel among and study for the first time tribal people living north of the Brahmaputra towards the Tibetan frontier, and to give permission to his good friend Christoph von Furer-Haimendorf, and also Ursula Graham-Bower, to enter this closed area and carry out their pioneering studies. 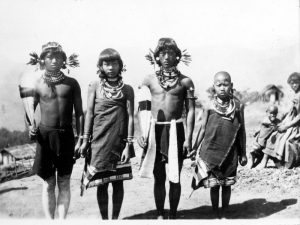 When India achieved Independence in 1947, Mills retired from the Indian Civil Service and joined the School of Oriental and African Studies, first as Lecturer then as Reader. He was elected to the Council of the Royal Anthropological Institute in 1948 and served as its President from 1951-1953. While at SOAS he was able to work with Christoph von Fürer-Haimendorf from the inception of the Department of Cultural Anthropology in 1950 until Mills retired in 1954.

Mills paid a heavy personal price for his time in north-east India. Not only was his own health debilitated by frequent bouts of malaria and other tropical diseases, but his elder daughter, Philippa, died at the age of 15 from malaria. Mills himself succumbed to heart disease in 1960. His ethnographic collection, totalling over 2000 objects, is now held at the Pitt Rivers Museum in Oxford, while his prolific photographic archive is held at SOAS and is available to view online. In addition to the photographic material the collection comprises personal papers, correspondence, diaries, reports, lecture notes and articles relating to his experiences in North East India, and his later teaching and research on the area.