Kaishien gaden, or The Mustard Seed Garden Manual of Painting

Kaishien gaden, or The Mustard Seed Garden Manual of Painting

What hides behind this poetic title? One of the most popular Chinese painting manuals from the Edo period in Japan, of course! Did you know that SOAS Special Collections held a very rare complete set of the first Japanese edition of this manual? 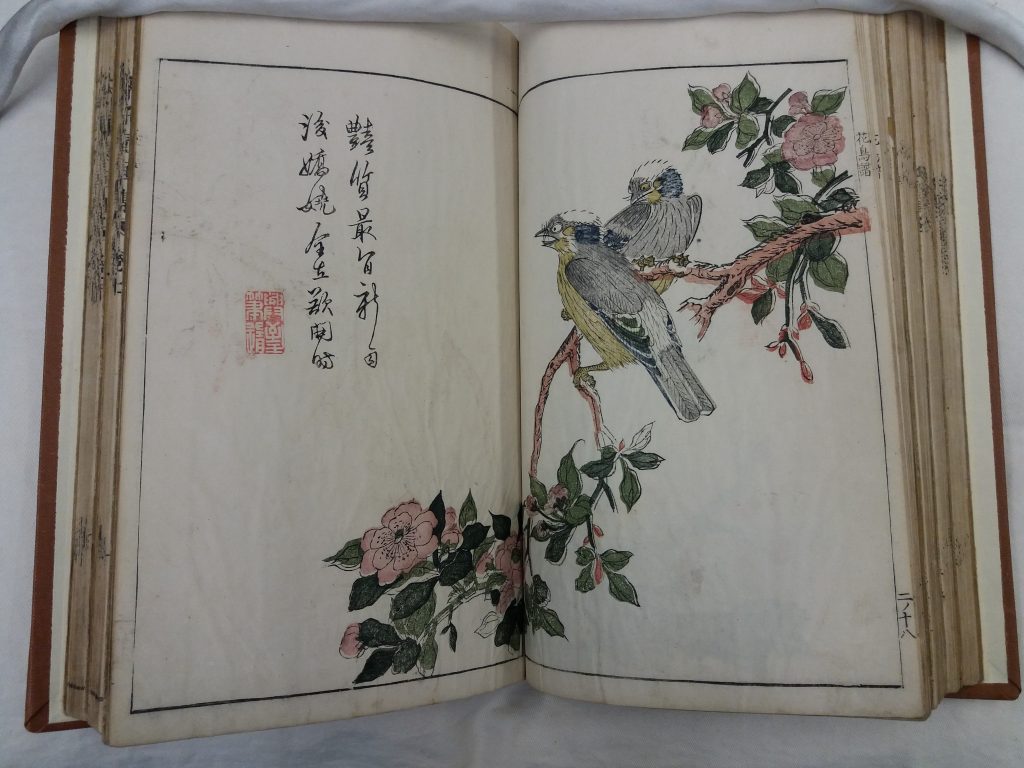 Wang  Gai was a gifted stylist who worked in the vibrant city of Nanjing (China) in the late 17th and early 18th centuries. Wang Gai’s ability to paint in a range of manners led to his selection as the illustrator of the “Mustard Seed Garden Manual of Painting“, a primer on painting that introduced techniques and historical styles.

The distinctively poetic title of this work comes from its commissioner: the famous Ming loyalist, literatus and playwright Li Yu 李漁, had a villa garden in Lanxi, Zhejiang province, known as Jie zi yuan, or the Mustard Seed Garden.

Li Yu owned a copy of the Shanshui Huapu (山水画譜, Instruction Album in Landscape) by Li Liufang (李流芳, 1575-1629), and asked Wang Gai to expand it. 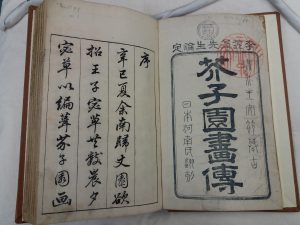 Wang Gai produced the first part of the Mustard Seed Garden Manual in five books, with an introduction covering the classical theories, techniques of painting and elements of pictorial terminology. The other books of that first part dealt with the preparation and use of brushes, inks and colours, followed by illustrated sections on how to paint trees, rocks, people, objects, buildings and landscapes.

In 1701, Wang Gai and his two brothers Wang Shī (王蓍) and Wang Niè (王臬) published the second part, which included four books respectively on how to paint orchids, bamboos, plum blossoms and chrysanthemums. The third and last section came also in four books, and was also done in collaboration with his brothers: it tackled the painting methods of flowering plants, herbs, insects, birds and animals.

In each of these three parts, an introduction summarized the guiding principles, followed by illustrated explanations of the painting methods and concluded by copies of works by famous artists. Rather than a sophisticated theoretical essay on aesthetic thought, the Mustard Seed Garden Manual was before all a clear, structured and highly didactic document.

The popularity of this work both in China and Japan is attested by the many editions produced in both countries. In China, it was aimed to be a primer on painting that introduced techniques and historical styles to the scholars of Nanjing. In Japan, it was introduced in the late 17th century and quickly acquired such popularity that it was reprinted there in colour in 1748. That edition provided both a gateway to Chinese painting itself and to the art of full-colour printing. It had a great impact on the training of artists and the development of Edo period painting, especially the Japanese Southern style nanga 南画 painters. Those Japanese artists not only learned technique, theory, and history from the Mustard Seed Garden Manual, but frequently copied actual compositions from it, using the work as a template for their own paintings.

This copy held in SOAS Special Collections is one of the rare surviving complete sets of early printings of the 1748 first Japanese edition, published in Kyōto by Kawanami Shiroemon (also known as Kananrō). 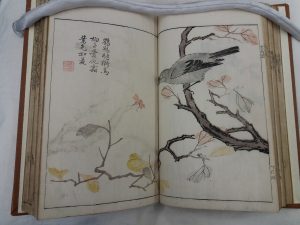 This edition faithfully reproduces the Chinese original, notably with its use of the subtly wiped colour woodblock printing in imitation of Chinese ‘boneless’ (without outline) painting. It is however bound in Japanese style. This first edition is composed of six multicoloured woodblock printed books on double leaves, in traditional Japanese format, which were more recently gathered in European binding in one volume. Later editions were published in 5 or even only 4 volumes. The rather neat condition of its printing suggests that it might be among the early print runs of the wood block.

This work is the only second book printed in colour in Japan. The earlier one, Mincho shiken 明朝紫硯 (A Living Garden of Ming Painting), was published in 1746; an early copy of which can be found at the British Museum in London.

Worldwide, copies of this 1748 edition of Kaishien Gaden are quite scarce, especially with the date still present: in later printings the date is often carved off and a new publisher added. Professor Thomas Ebrey from the University of Washington (Seattle, WA), who has worked extensively on the various editions of this work, informed us that he could only find a total of about 20 exemplars in libraries and museums’ catalogues across the world, with less than half in Japan.

SOAS’s copy was accessioned in the 1960’s and was procured through the SOAS Library Grants Committee. Unlike many Japanese illustrated books, Kaishien gaden was not collected by most 19th century European collectors, possibly because it was perceived more as a pedagogical textbook than a work of art in itself. 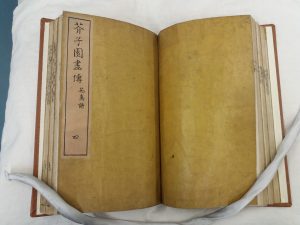 This copy still presents today many opportunities and avenues of study and research. By its contents, it appeals to both Chinese and Japanese art historians, as it highlights the rapid propagation of Chinese painting techniques and their adaptation and transmission in Japan. By its format, it informs on a crucial period of Japanese book printing technique history, and book historians would revel in the study of its publication stamps. Book conservationists would also find much to study (and possibly advise on) in the treatment that these 18th century Japanese volumes received, first in their country of publication, and once they entered European collections.

While waiting for interested parties to sponsor and subvention the conservation and digitisation of this rare and delightful historical art textbook, we will be happy for you to consult the original 1748 edition of the Kaishien gaden (ask for classmark: EF.FFH.L/448085)  in our Special Collections Reading Room at SOAS Library, as soon as it reopens to the public!

For more information on this item or any related item in our holding, and for requests to consult the original, please contact us at special.collections@soas.ac.uk.

In the meantime, we encourage you to peek at other illustrated Japanese works held in SOAS Special Collections, a small selection of which can be browsed on our Digital Portal at https://digital.soas.ac.uk, such as: