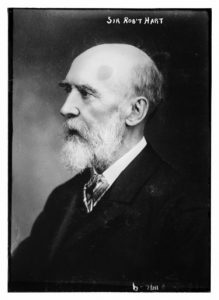 In celebration of Maritime Day, this latest blog post examines one of the central figures in the Imperial Chinese Maritime Customs Service, Sir Robert Hart.

Hart became a key figure in the history of China in the 19th century and its foreign relations with the West. Witness to four foreign invasions of China during a time when the country was struggling with the need for modernisation, Hart played a major part in the economic development of the country through his leadership of the Chinese Maritime    Customs Service.

Born in 1835, in Ulster, into a devout Methodist family, he was educated at a Wesleyan school in Taunton, Somerset, then Wesley College, Dublin, and at the age of 15 was sent to Queen’s University, Belfast, where he graduated in 1853.

In 1854, at the age of nineteen, Hart began his career as an interpreter in the China Consular Service, before being transferred to Canton to work as a secretary to the allied commissioners governing the city and, later, as local inspector of customs. Following the retirement of Horatio Nelson Lay in 1863, Hart was appointed Inspector General of the Chinese Imperial Maritime Customs Service in Peking, a position he was to hold for the next forty-eight years. Under his guidance, the service, (which aimed to regulate trading relations between China and the West and customs revenue), flourished with revenue peaking at twenty-seven million. (Read more about the CIMS here)

Hart’s great understanding of Chinese culture and his ability to see things from the Chinese perspective meant that he became a trusted and influential figure, valued by the Chinese government and foreign ministers alike, who often sought his advice. The extent to which he was appreciated is reflected in the numerous titles and awards bestowed upon him by both the Chinese and the British. These included, on the part of the Chinese, the award of a Red Button (highest rank), a Peacock’s Feather, and the Order of the Double Dragon, while the British granted him the orders of CMG (1880), KCMG (1882), GCMG (1889) and ultimately, a baronetcy (1893).

After the death of James Campbell in 1907 Hart’s letters were returned to the London office of the Chinese Maritime Customs. Their immediate fate is unclear, but they passed from the Hong Kong and Shanghai Bank and were deposited at SOAS in December 1965.

SOAS also holds papers relating to the Maritime Customs Service, as well as other of its prominent officers. A number of these resources, including the photographs of Reginald Hedgeland  have been digitised and are available to view online here.