The discovery in SOAS Special Collections of a manuscript thought lost for the last 150 years allows us to re-introduce an extraordinary figure of 19th century India: Sikandar Begum, Regent and Nawab of Bhopal (1816-1868). 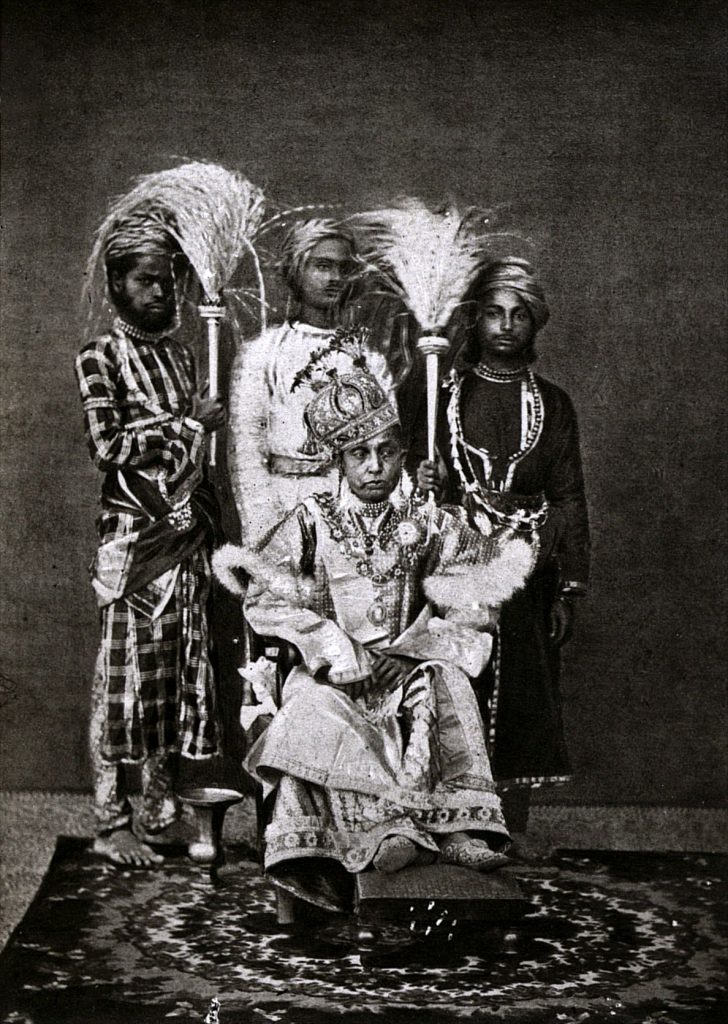 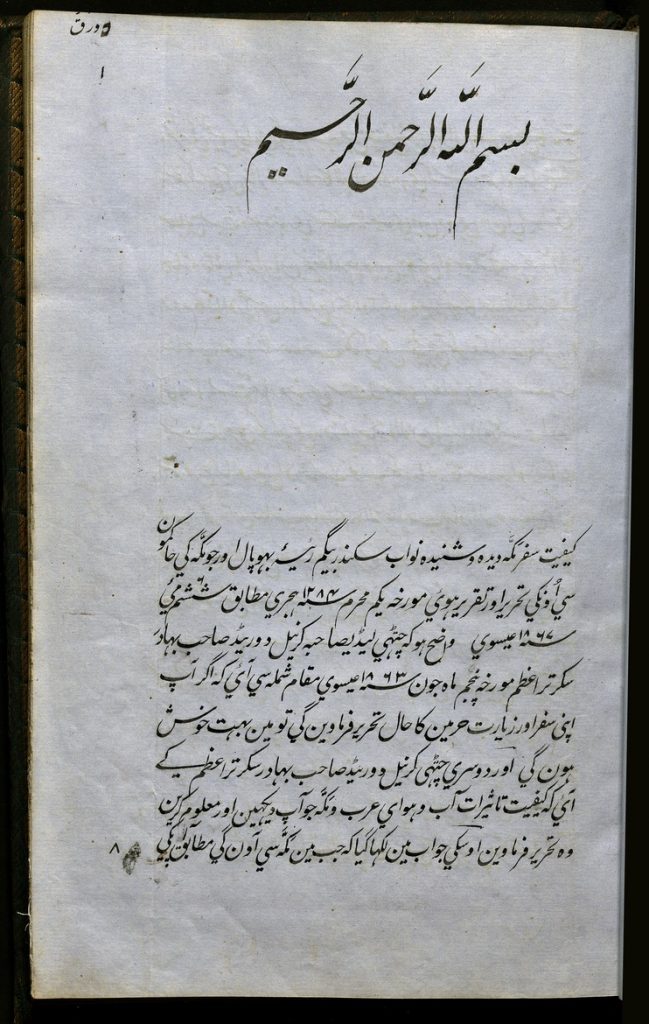 Despite having been researched extensively and most recently by Dr Siobhan Lambert-Hurley (a SOAS Alumna, who published in 2007 a study of the English translation of Sikandar Begum’s account, entitled “A princess’s pilgrimage: Nawab Sikandar Begum’s A pilgrimage to Mecca”), the original manuscript in Urdu of this Indian ruler was all but given for “lost”, as it could not be traced anywhere.

Last month, prompted by the visit of independent researchers promoting Urdu literature in London communities and participating in the SOAS Library Urdu metadata crowdsourcing project, we, librarians and curators, perused our holdings of Urdu manuscripts and came across this rather dry, albeit intriguing, record in our archives’ catalogue:

The manuscript we retrieved from our stacks revealed itself to be way more exciting than this, on multiple accounts: its authorship, its custodial history, and its contents thoroughly debunked any last misconceptions one may have entertained of Indian Muslim women history, especially ruling women, as one of silence, self-effacement, segregation and oblivion.

Nawab Sikandar Begum wielded power in the doubly challenging context of a patriarchal system confronted to the British colonial rule. This woman of diminutive stature but with the most imperious gaze was the second of four female rulers to reign for more than a century over the princely State of Bhopal. 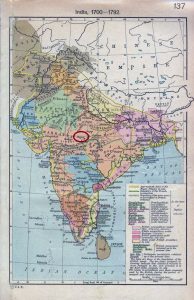 Bhopal is located in Central India (circled in red on the map). It was one of the largest independent fiefdoms that emerged during the decline of the Moghul Empire. In the 17th century, the Afghan Pashtun Sardar Dost Mohammed Khan, a commander in the Moghul army posted in the area, took advantage of the disintegration of the Moghul Empire and established his quasi-independent fiefdom of Bhopal. Bhopal became a Princely State in British India as a result of the Anglo-Bhopal Treaty of 1818. It was merged into the Indian Union in 1949, before fusing with neighbouring states in 1956 to form the current state of Madhya Pradesh, with the city of Bhopal as its capital.

One striking feature of the history of Bhopal is the fact that for over a century, between 1819 and 1926, it was successively ruled by four women, who became known as the “Begums of Bhopal”: Qudsia Begum, Sikandar Begum, Shah Jahan Begum and Sultan Jahan Begum.

When the ruling Nawab, Mohammad Khan, died without an heir in 1819, his young but determined widow Qudsia persuaded the British to crown her, till her only heir and daughter Sikandar came of age.
Sikandar Begum’s husband too died in 1844, and her political acumen coupled to her competent handling of affairs of state, compelled the British to suspend the princely state system of dual control and declare the Begum a sovereign in her own right, and her daughter Shah Jahan the rightful heir to the crown.
While fighting for the independence of her rule all her life, Sikandar Begum remained a staunch supporter of the British Crown throughout her reign. The support she provided them during the First War of Independence in 1857-1858, despite intense internal pressure, secured her political position in the long-term. Three years later, in 1861, she was invested as Knight Grand Commander with the Exalted Order of the Star of India, making her, at the time, the only female knight in the British Empire besides Queen Victoria.

Sikandar Begum, like the other Begums of Bhopal, was proud of her Afghan ethnicity.  She refused to go into Purdah and be confined to women’s quarters and traditional activities. Her education was on par with what would have been expected from any other male ruler, both academically and physically, preparing her to rule in a male dominated field. Throughout her reign she powerfully asserted her presence in public life: she was a practiced horsewoman and participated in polo games and hunting parties. She was also trained in martial arts and could equally wield a bow, a lance or a sword.
She commanded the army and inspected district offices, the courts and the treasury herself, making sure that her administration run smoothly. She would personally visit villages to ensure herself of the welfare of her people and assess the progress of the various reforms she implemented.

In terms of progressive reform and advancement, Sikandar’s 21-year reign qualifies as a golden age of Bhopal’s history. Bhopal emerged from it as one of the best governed, enlightened and stable princely states.
She was an effective, reform-oriented administrator, who strongly supported girls’ education (she founded the Victoria School in the centre of Bhopal to provide poor Hindu and Muslim girls basic academic skills and technical training in various trades). 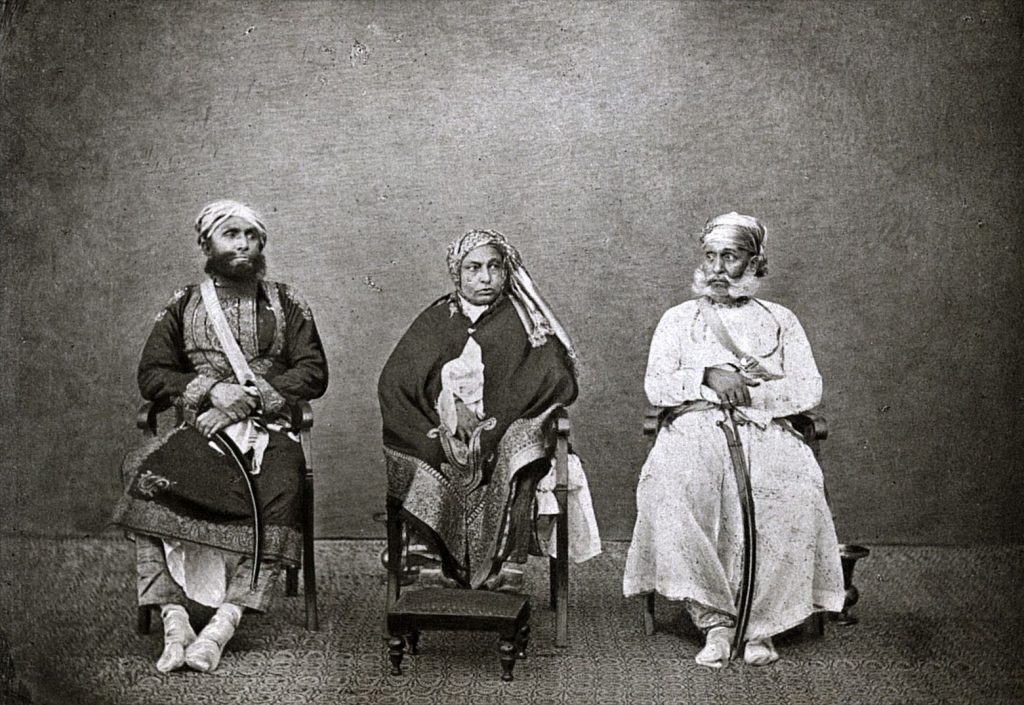 The figure that she cuts defies a lot of preconceived ideas: a staunch ally of the British, yet a fiercely independent Indian ruler, she boldly sifted Islamic teachings from traditional behaviours and assumed her fervent Muslim faith while rejecting the shackles imposed by a patriarchal society. It seemed that, if she ever resorted to Realpolitik strategies, it was never at the expense of her strong moral inner compass and spirituality.
One of her marking symbolic gestures happened during her visit to Delhi in 1862, when she had the British to reopen the Delhi Grand Mosque (Jama Masjid) that they had closed during the First Independence War of 1858.  Sikandar then proceeded to clean the mosque herself (it had been defiled, having been used by the British as stables) and was the first to offer her prayers there. 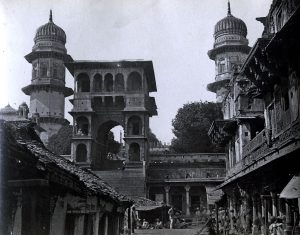 Then, and once again against all social conventions of the time and the dangers inherent to such an enterprise, Sikandar Begum decided to perform the Hajj pilgrimage to Mecca. She left at the end of 1863 with a retinue of a thousand people, including her own mother Qudsia Begum. While the Indian pilgrims caravans to Mecca had been heftily patronised by the Muslim Moghul rulers – Emperor Akbar having been the first to organise the Hajj at state expense – the journey was deemed so long and hazardous that effectively none of the Moghul rulers performed the pilgrimage themselves.  By choosing to go on the Hajj pilgrimage, Sikandar Begum was signalling not only her strong faith and attachment to Islam, but also her worth as a formidable head of state, going further than any other male Moghul rulers had dared to. 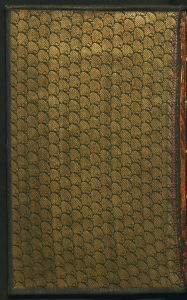 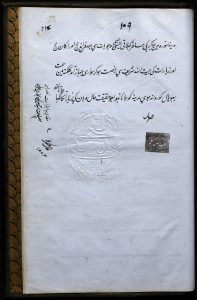 Colophon bearing the personal seal of Sikandar Begum, as well as the embossed seal of the State of Bhopal. ‘Tārīkh-i safar-i Makkah ‘ (1867)

The manuscript entitled ‘Tārīkh-i safar-i Makkah’  is the account of Sikandar Begum’s journey to Mecca in 1280 AH  (1863-1864 AD), penned down in Urdu in 1284 AH (1867 AD).
As Sikandar Begum was embarking on her pilgrimage, she was persuaded by both Lady Durand, wife of Major-General Sir Henry Marion Durand, the Political Agent in Bhopal in the 1850’s, and Emma Laura Willoughby-Osborne, wife of Lieut.-Colonel John William Willoughby Osborne, Political Agent at Bhopal in the 1860’s, to put down in writing her recollections of the journey. Both British women felt that such account would reap a tremendous interest from a wider audience, providing as it did the insight of a female Muslim ruler commenting on an event virtually unknown in Europe.

Her book is the first of its kind, as no ruler from India had before her undertaken the Hajj pilgrimage, let alone written down an account of it.

Upon her return to Bhopal, Nawab Sikandar Begum proceeded as promised and recorded her travels and (mis)adventures on her way to Arabia and in Mecca, and dedicated her narrative to her fellow ruler, Queen Victoria.

Her account of her pilgrimage is at the image of this strong-willed and independent-minded Begum: defying the conventions of the genre, it does not so much offer an insight into her spirituality than a vivid (also described as acerbic and witty) and distinctly secular description of the social and cultural life of Arabia in the 1860’s, particularly the lives of women. The Begum’s account comes very close to an anthropologist’s version. 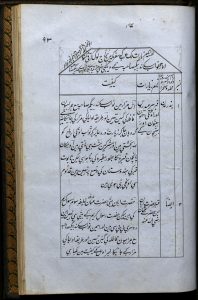 Her pragmatic spirit showed once again when, faced by so many life-threatening mishaps, she decided to forgo the traditional visit to Medina. Her narrative ends with a series of letters indicating the risks posed by roguish Bedouins, as well a very down-to-earth list of the expenses involved in this pilgrimage.

Two copies of her account were produced. It appears that the copy held at SOAS Library is one of the two copies that were presumed missing until now.

One manuscript was given to Lady Durand and remained in the Durand family until 1970, when SOAS Library acquired it, along with the other papers of Sir Henry Marion Durand and his son Sir Henry Mortimer Durand.

The other manuscript of Tārīkh-i safar-i Makkah was kept by Sikandar Begum’s successor, her daughter Nawab Shah Jahan Begum, in the Royal Archives of Bhopal. Upon her mother’s death in 1868, Shah Jahan Begum took over the dedication and entrusted Bhopal’s Political Agent Lieut-Col. Willoughby-Osborne with the manuscript, in order for his wife, Emma Laura Willoughby-Osborne, to translate it from Urdu to English.
Mrs Willoughby-Osborne completed the translation in 1869 and had it published in 1870 by W.H. Allen & Company. The translation is adorned with several plates by photographer Frederick Fitzjames, offering early views of Bhopal, as well as portraits of Nawab Sikandar Begum and other members of the ruling family. SOAS Special Collections hold one of the very few copies of this edition available in the UK. 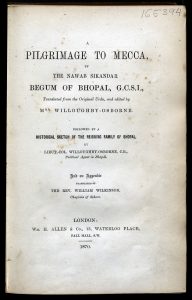 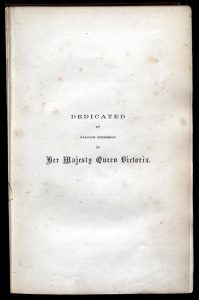 Dedicace to Queen Victoria in ‘A Pilgrimage to Mecca’ (1870) 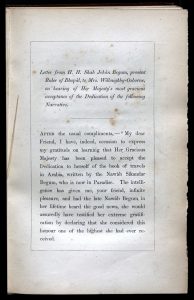 Shah Jahan Begum’s letter, in ‘A Pilggrimage to Mecca’ (1870

While the account may have from its inception be intended for a British audience – the dedicace to Queen Victoria and the fact that only the English translations of the text were published between 1870 and 2007, seem to comfort that idea – the re-discovery of the original Urdu manuscript calls for a new reading and study of this most fascinating text, by the indomitable Nawab Sikandar Begum.

Originals of these works can be seen in the Special Collections Reading Room, SOAS Library.

Enquiries about the material and requests to consult the originals should be sent to the Special Collections Team at special.collections@soas.ac.uk.

Check out the other profiles of women in our Special Collections on our Twitter feed (#WomenInArchives @SOASArchives) during Women’s History Month 2020.