This week’s blog looks at a fascinating piece from our collections, likely the world’s earliest surviving text printed in Bengal and Northern India, a copy of the ‘Calendar for the year of our Lord MDCCLXXVIII. Calculated to the Meridian of Calcutta‘ (part of MS 12235, held by SOAS Special Collections). This guest blog is written by Andrew Otis, a Ph.D. student at the University of Maryland, Philip Merrill College of Journalism and author of the book ‘Hicky’s Bengal Gazette: The Untold Story of India’s First Newspaper’ (2018). The calendars discussed in Andrew’s blog have recently been digitised by SOAS Library and copies are freely available online to a global audience via SOAS Digital Collections. 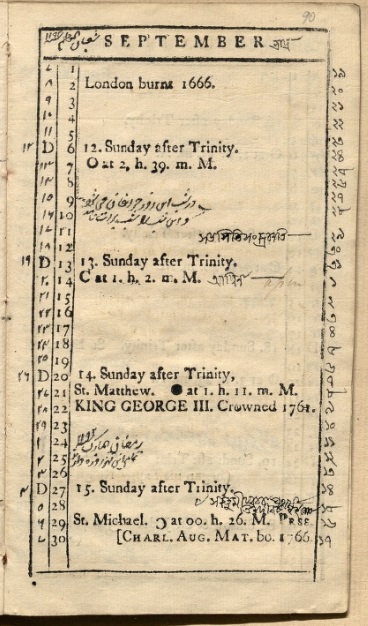 Page for September 1778, indicating Gregorian, Hijri lunar and Bengali calendar dates, with entries in English, and Persian, Bengali, from ‘Calendar for the year of our Lord MDCCLXXVIII. Calculated to the Meridian of Calcutta‘, part of MS 12235, SOAS Special Collections

In the SOAS library is the first surviving printed document from Bengal and Northern India, a copy of the Calendar for the year of our Lord MDCCLXXVIII. Calculated to the Meridian of Calcutta‘ (part of MS 12235, held by SOAS Special Collections). Little known to the outside world, this is a calendar – sort of like a yearly almanac – printed around December 1777 in Calcutta (now Kolkata). There is also an advertisement, a piece of wastepaper, that was discovered sewn into a slightly later calendar [‘A Compleat [sic] Calendar for the Year of our Lord MDCCLXXX’, EB 77.35 / 12040, also held by SOAS Special Collections], made all the more remarkable because it is the type of document that rarely survives the centuries.

Calendars were an everyday document in the 18thcentury, and were a common way to mark events, and to keep track of things like the moon and the tides.

Printing came to Bengal in 1777 when two presses were set up almost simultaneously, one in Calcutta by James Augustus Hicky (famous for later printing India’s first newspaper, Hicky’s Bengal Gazette)1and another in the small town of Hooghly by Nathaniel Brassley Halhed and Charles Wilkins (famous for printing A Grammar of the Bengal Language). It is unclear which press was established first.

In November 1777, a missionary named Johann Zachariah Kiernander approached Hicky to print calendars for the next year. Kiernander had been importing calendars from South India and was looking for a cheaper alternative.

However, there was a disagreement over price, so the Kiernander went in search of his own printing press. By January 1778 Kiernander’s son Robert appears to have acquired a press, although it is unclear from where. On 7 January he wrote a letter to missionary colleagues in Halle, Germany saying that he had begun printing calendars and advertising them for sale in Calcutta.

‘I have bought here a very small English printing press with which I have just printed an English almanac of which I am sending you a copy as a sample in this letter. I saw often the printing press at Halle so I can well remember everything that is needed. This work is a pleasure for me…’2

These calendars set off a competition that soon turned rancorous. Hicky began printing his own calendars. Unable to compete with Hicky on price – and upset that Hicky had very likely plagiarized their calendar – the Kiernanders began giving theirs away for free. (The disagreements later became so rancorous that later Hicky used his newspaper to accuse the elder Kiernander of embezzling from a charity and Kiernander sued Hicky for libel).

So whose calendars are these in the SOAS library? Hicky’s or the Kiernanders’?

They are likely the Kiernanders’.

For two reasons: first, Hicky tended to sign his name to everything he printed. Two other surviving calendars which he printed – one for the year 1780 [EB 77.35 / 12040] and one for 1782 – both declare “Printed by J. A. Hicky” on the title page. Hicky was such an advocate for branding that he named his newspaper after himself. It’s Hicky’s Bengal Gazette, not the Bengal Gazette. Even advertisements that Hicky printed bear his name (more on that below). Second, Hicky’s calendars look different; note the motifs, ornaments and floral marks. 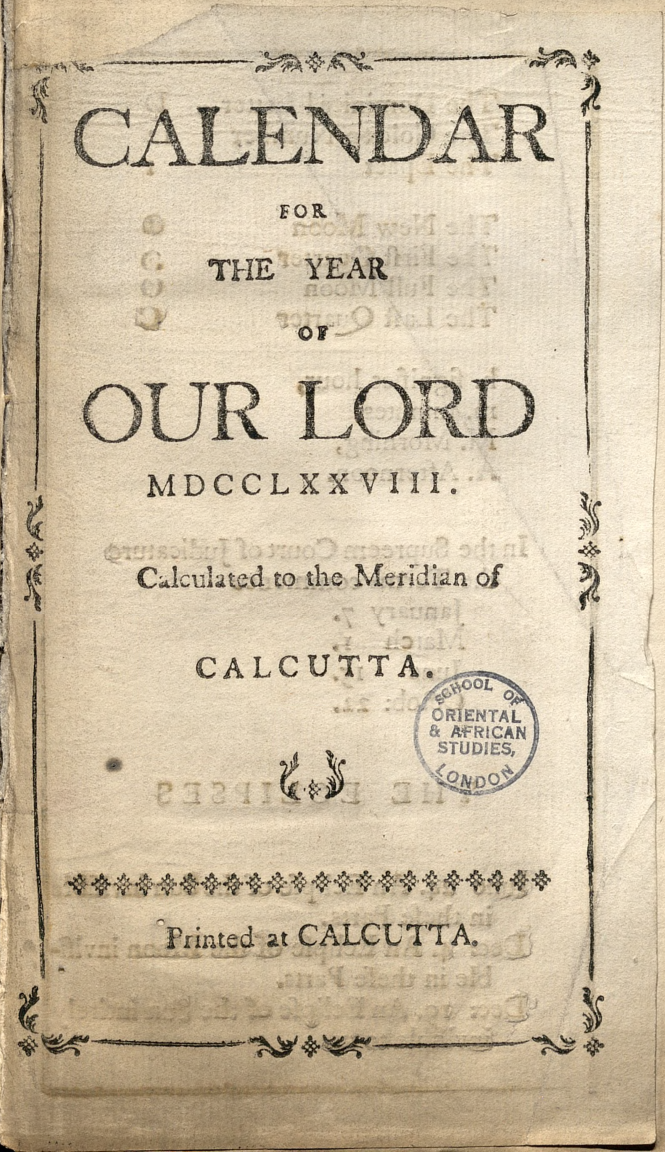 Title page from Kiernander’s ‘Calendar for the year of our Lord MDCCLXXVIII. Calculated to the Meridian of Calcutta‘ (1778), MS 12235, SOAS Special Collections. 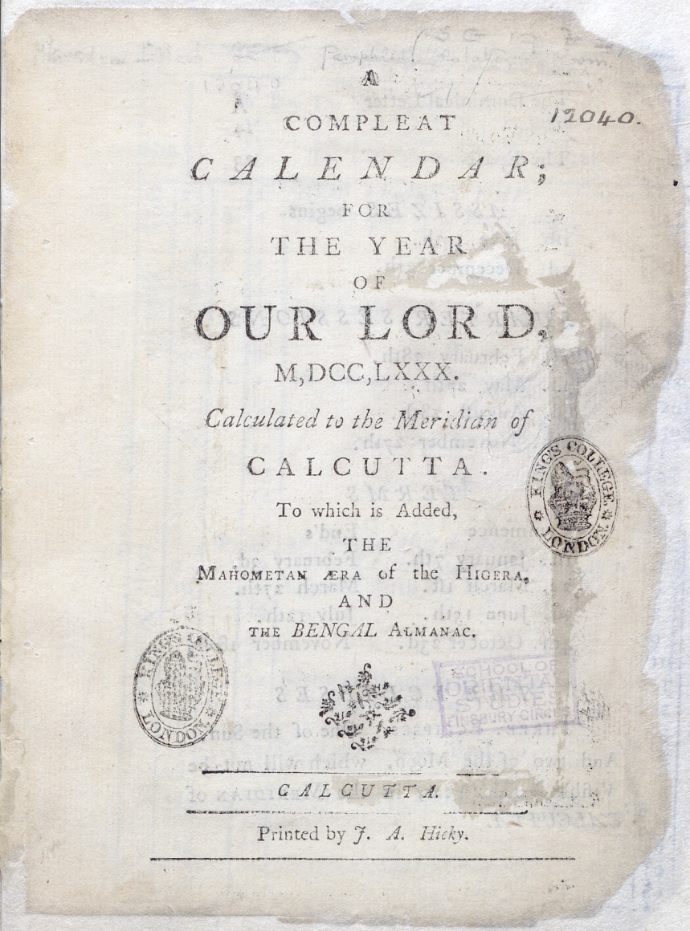 Also in the SOAS library is the following advertisement for Chinese goods for sale in Calcutta which was printed by James Augustus Hicky. This advertisement was found inside Hicky’s calendar for 1780. When the calendar was bound, the advertisement was used as a “waste paper” to stiffen the binding. The date it was printed is uncertain but must be between 1777 (the start of Hicky’s printing press) and the end of 1779 (when the calendar was printed). At some time between 1918 and 1939, the waste paper was removed by a librarian at SOAS which is how it came to notice.3[A note with the wastepaper indicates it was later removed by staff and affixed to a support in January 1972]. 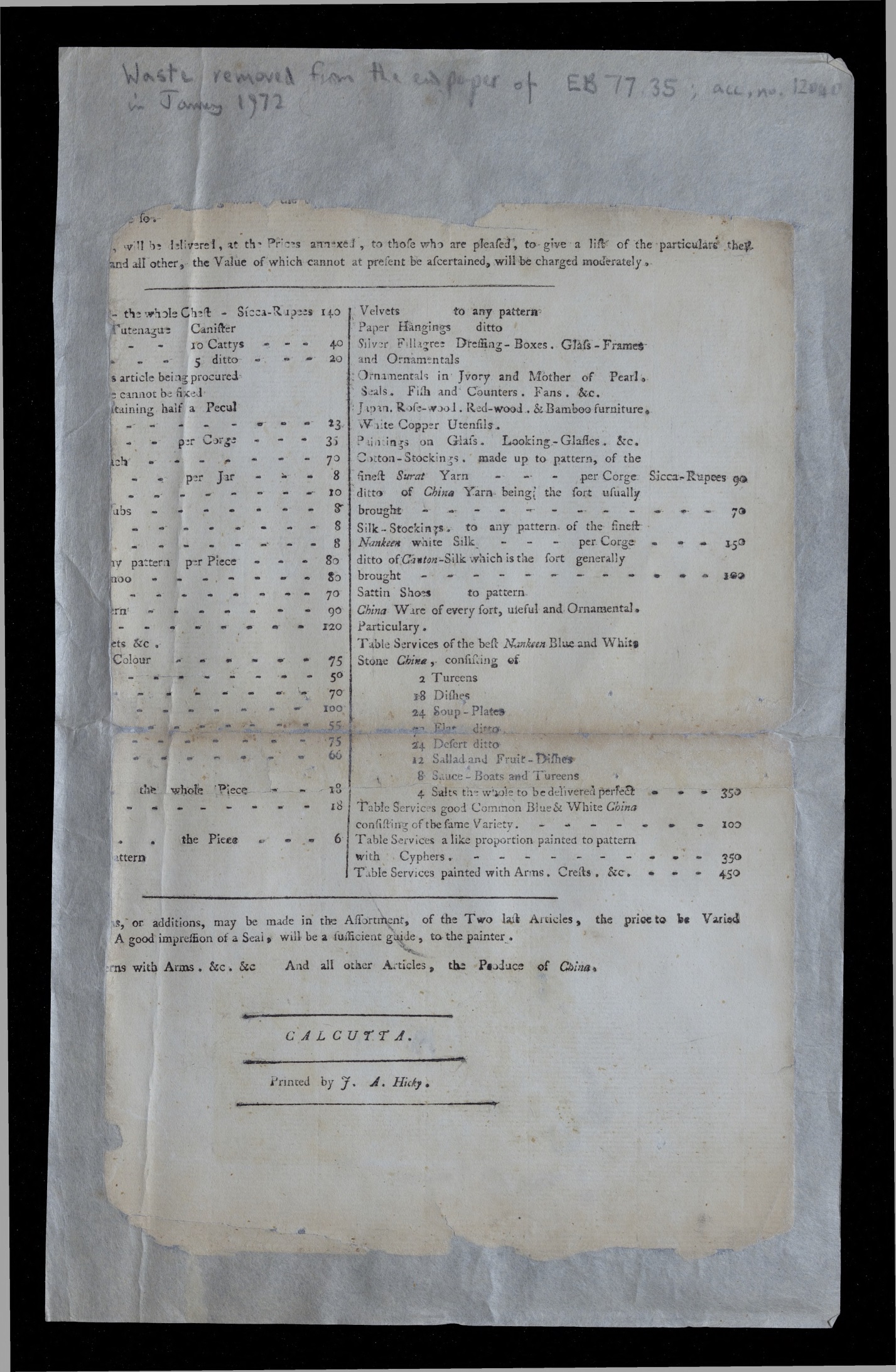 The wastepaper is the type of material that rarely survives through the centuries, making its discovery all the more remarkable. Handbills like this were generally used as scrap and tend not to survive long after printing. More remarkable is that this handbill is the third surviving printed work from North India and Bengal (after the calendars above, and Halhed and Wilkins’ Grammar of the Bengal Language).

The calendars and the waste paper were originally in the library of the orientalist, William Marsden. According to Bloomfield, Marsden’s library was ‘acquired by King’s College, University of London, and the greater part of the Oriental books was transferred to the School of Oriental and African Studies after its foundation in 1917’.4