This week’s blog looks at David Storm Rice’s photographs of archaeological excavations at Harran, Turkey, in the 1950s. This recently catalogued collection joins Rice’s papers catalogued last year, and together the two collections provide insight into the scope of his work on the site at Harran.

Professor David Storm Rice (1913-1962), an academic at SOAS, made four expeditions to Harran between 1951 and 1959. His records of the expeditions are the subject of an earlier blog. The site at Harran was occupied from the Bronze Age, and the ancient city  became a significant post on trade routes in the area. The city was also known for a temple to the moon god Sin, and, in the Islamic period, for its university. It was destroyed by Mongol forces in 1260 AD.

Building on a 1950 expedition by Seton Lloyd, director of the British Institute at Ankara, and William Brice, Rice’s expeditions worked extensively on the remains of the Great Mosque, as well as on one of the gateways to Harran’s citadel and on a road lined with shops leading to the mosque. The discovery of three large Babylonian stele in the entrances to the mosque confirmed that the site was that of the ancient Harran.

The photographs of Professor David Storm Rice of archaeological excavations at Harran, Turkey (MS 381321) are now available for consultation in the Special Collections Reading Room. 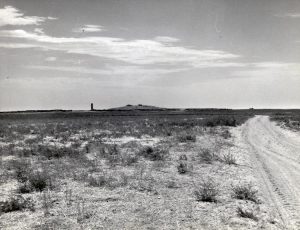 A view over the plain to Harran. The minaret of the Great Mosque can be seen to the left, with the tell of Harran to its right. The ‘tell’ is the artificial mound marking the site of the ancient city. (MS 381321/1/122) © SOAS Library 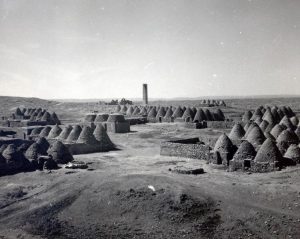 A view of beehive houses at Harran. The minaret and remains of the great mosque can be seen in the distance. The beehive houses are characteristic of Harran. Their design keeps the interior cool in summer and warm in winter. Made with mud, adobe, and brick, they can be built quickly and are easily extended. (MS 381321/1/11) © SOAS Library 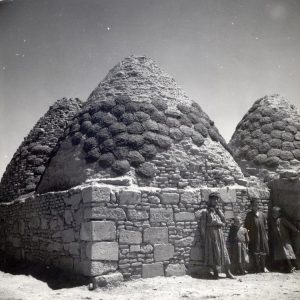 The local houses at Harran incorporated materials from the ancient site. In this case, the house wall includes a fragment of an inscription. During the 1951 expedition Rice reconstructed the inscription from the citadel’s south east gate. Eleven fragments were found near the gate and a twelfth in the wall of a local house – which may be the fragment shown here. The inscription dated from 1059 AD and gave the names and titles of Mani’ ibn Shabib, the Numayrid emir of Harran. (MS 381321/1/101) © SOAS Library 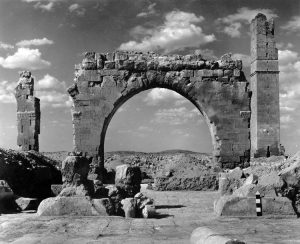 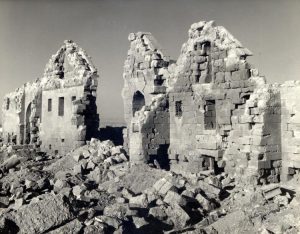 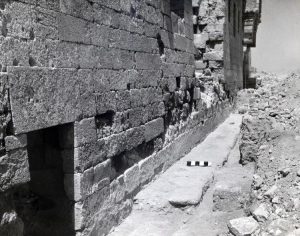 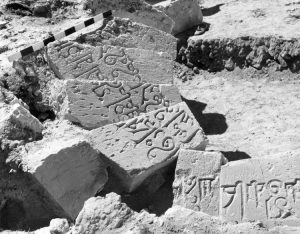 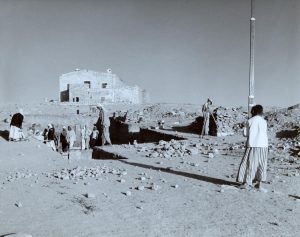 The archaeological team at work. Rice’s notebooks from the expeditions record the names of the labourers employed on the dig and their pay. (MS 381321/1/307) © SOAS Library 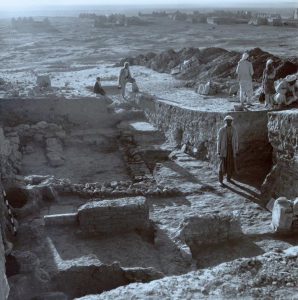 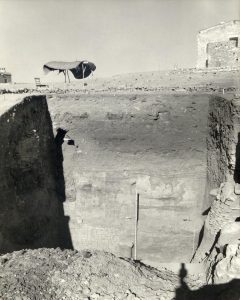 A view of the dig at Harran, showing the depth of one of the excavations. One trench was 14m deep, and yielded finds from the medieval period back to the Bronze Age. (MS 381321/1/198) © SOAS Library