As we wind up for the winter holidays and bid farewell to 2017, it seems every archivist here at SOAS Archives and Special Collections has a festive archive anecdote to share, so we thought we would collate our favourites into a short seasonal Blog post!

SOAS Archives and Special collections, broadly speaking, documents the British interaction with Africa, Asia and the Middle East over the past two centuries. The collections we hold then, be they of businesses, Missionaries or travellers, have often been created by men and women who find themselves wanting to maintain familiar festive traditions, but from very unfamiliar places.

This photograph of a table set for Christmas dinner, complete with a heavily decorated tree and a rather sinister ‘snowman’ could have been taken in any well-to-do British home at the turn of the century, but was in fact shot in Macao in 1908 in the dining room of the Lappa Commissioner. The snowman presiding over the room seems to have been created from cotton wool – they certainly wouldn’t have had a white Christmas that year – and finished off with the Commissioner’s gloves and boots! The tree is heavy with tinsel, stars and baubles. 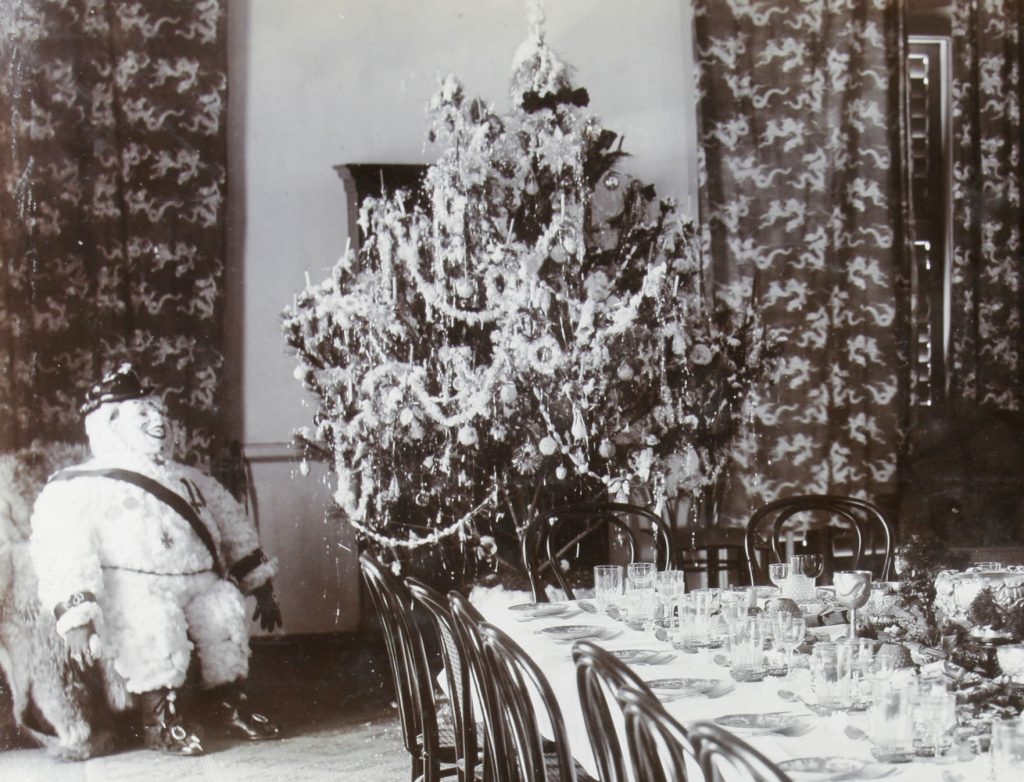 Despite not having much to celebrate during their time in captivity, civilian inmates of Hong Kong’s Japanese-controlled internment camps during the Second World War were determined to keep up the tradition of sending Christmas cards.  Using what little resources they had available, internees painstakingly hand-decorated postcards to send to fellow inmates. We have several in the papers of former prisoners, but this beautiful example was sent to Charles Collingwood Roberts, Taipan of John Swire and Sons. Together with all of Swire’s staff in Hong Kong, he was imprisoned for four years, 1941-1945, at Camp Stanley. 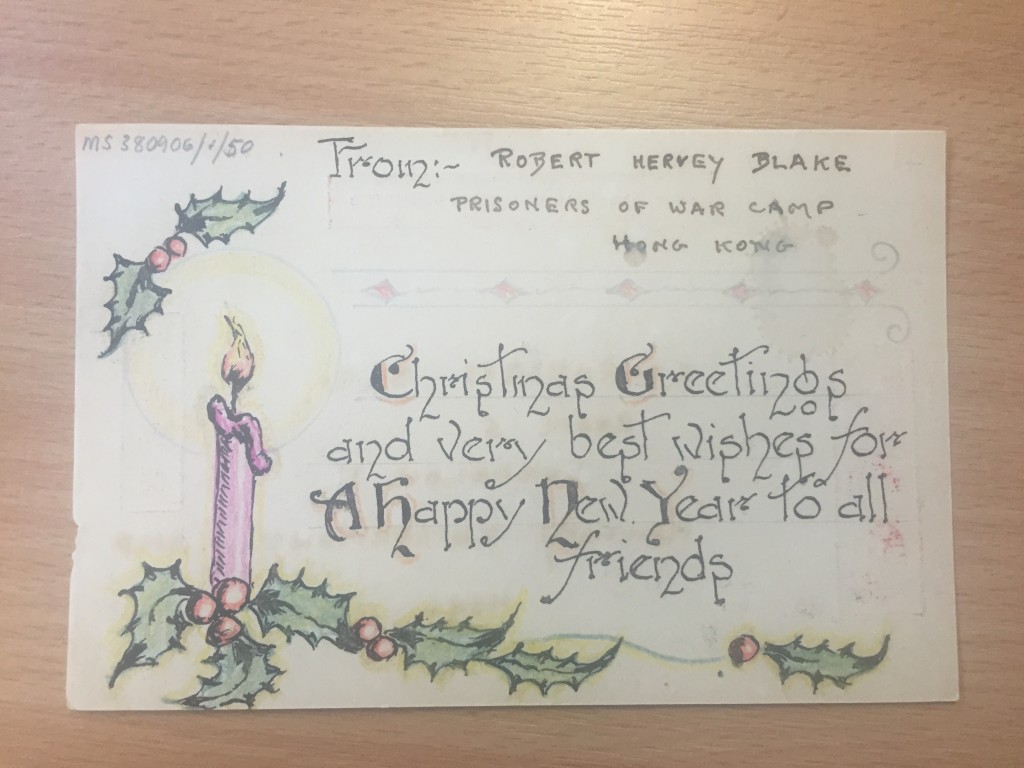 In times of peace, Christmas parties were being held by businesses operating far from ‘home’ across the world. Fleeting mentions within account books of receipts and venue bookings are often all that have lasted of them. But this receipt for a music band, microphone, prizes, presents and sandwich platter shows John Swire & Sons’ staff were certainly having fun in Kobe, Japan, in 1962! 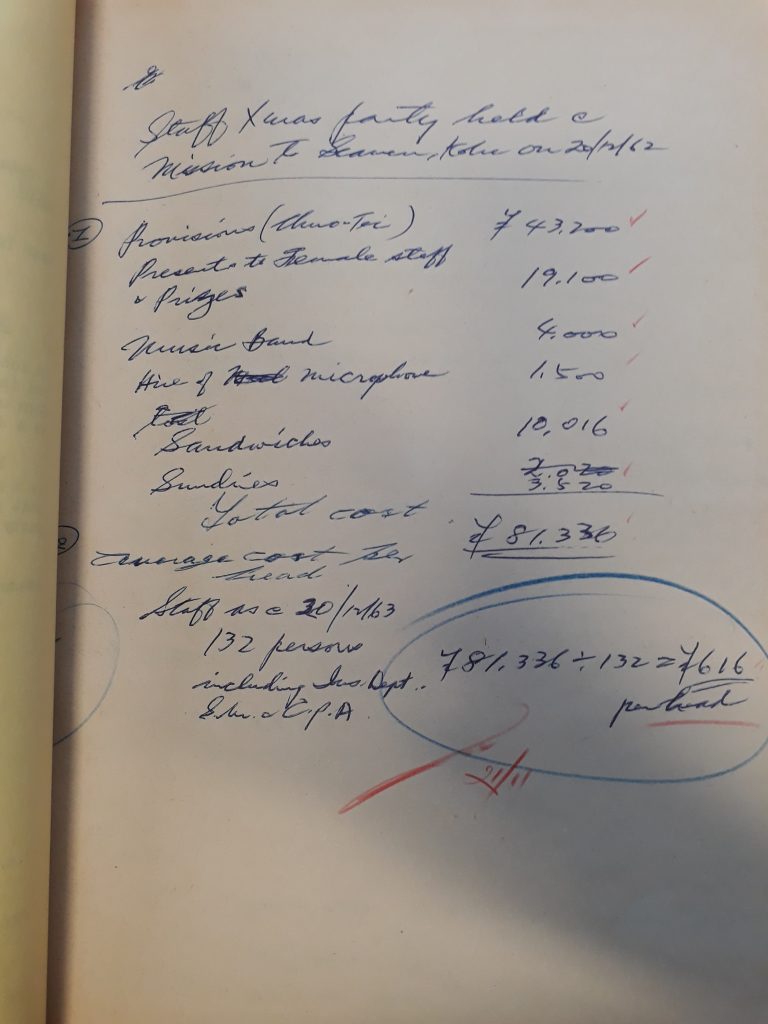 Last but not least is this sweet photograph from Alexander and Doris Sandilands’ archive. Alexander Sandilands MBE was ordained as a Congregational minister in Christ Church Congregational Church, Friern Barnet in 1926 and appointed as a London Missionary Society (LMS) missionary in the same year. Their family photo, taken in 1937 at the Maun Mission House in Botswana (then Bechunanaland) shows eldest son Ian dressed as a full-browed Father Christmas and an improvised Christmas tree stands in the background! 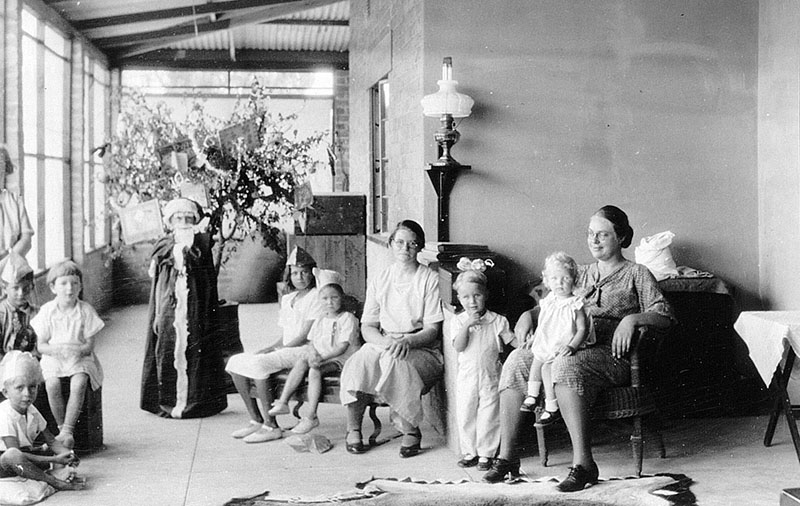 We are now closed until Tuesday January 2nd. Season’s greetings and a very happy new year to all of our Readers! See you in 2018!