SOAS holds the extensive archives of John Swire and Sons (JSS), a two hundred year old business established in Liverpool by one John Swire. Initially a modest textiles import-export business, after John’s death in 1847 it began to trade all manner of goods with Asia, from fencing wire to silks, Guinness to tea, and with great success. Still thriving today, the Swire Group is perhaps most famously known for its air carrier, Cathay Pacific. Historically though, it was their ships and steamboats for which they were renowned, carrying both goods and passengers. 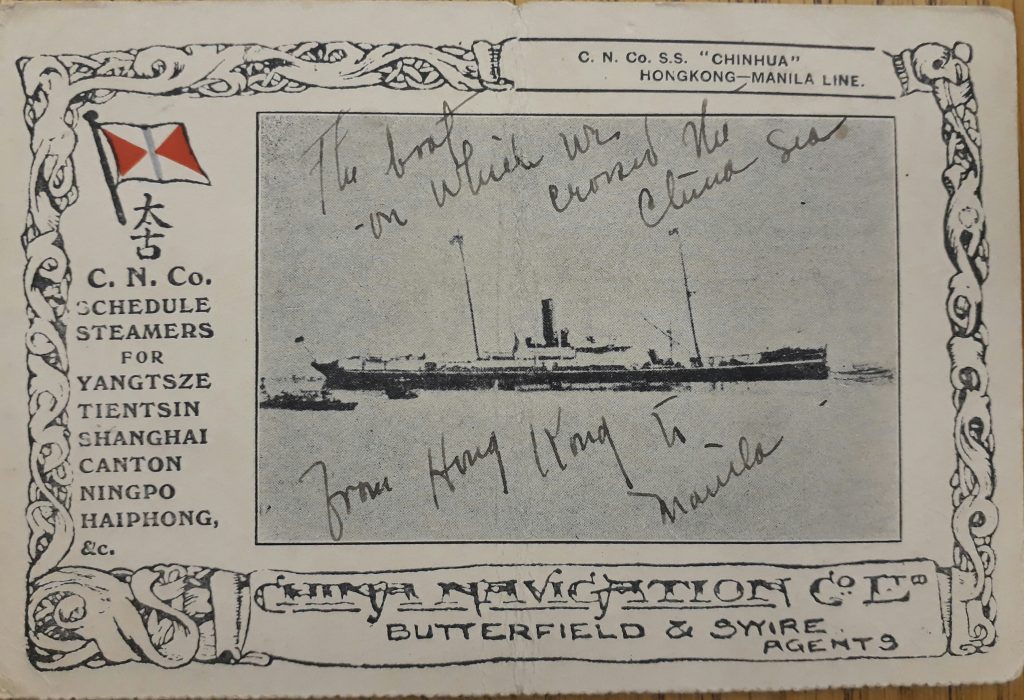 Postcard sent from the ‘Chinhua’ steamer, written across the picture is, ‘The boat on which we crossed the China Sea from Hong Kong to Manila’. 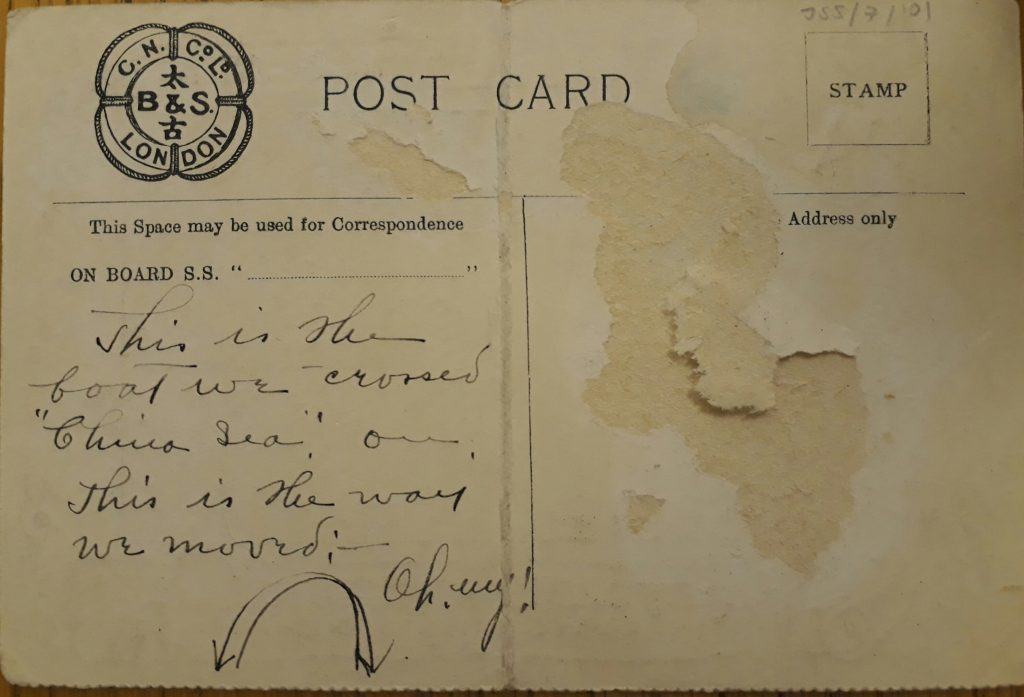 Reverse of postcard: ‘This is the boat we crossed “China Sea” on. This is the way we moved: Oh my!’

A partnership with R. S. Butterfield led to the company’s first major expansion in the East and a Butterfield & Swire office opened in Shanghai in 1867. Four years later, another branch opened in Hong Kong and the archives contain swathes of handwritten correspondence to and from these and the London office. In 1872, JS&S acquired the lucrative agency for Alfred Holt’s famous Blue Funnel Line and with Holt’s financial backing, proceeded to form the China Navigation Company, which tapped into the potential for steam shipping up the Yangtze River, then the only trade route into mainland China. By 1874, Swire was trading throughout South East Asia, Australia, New Zealand and Japan. 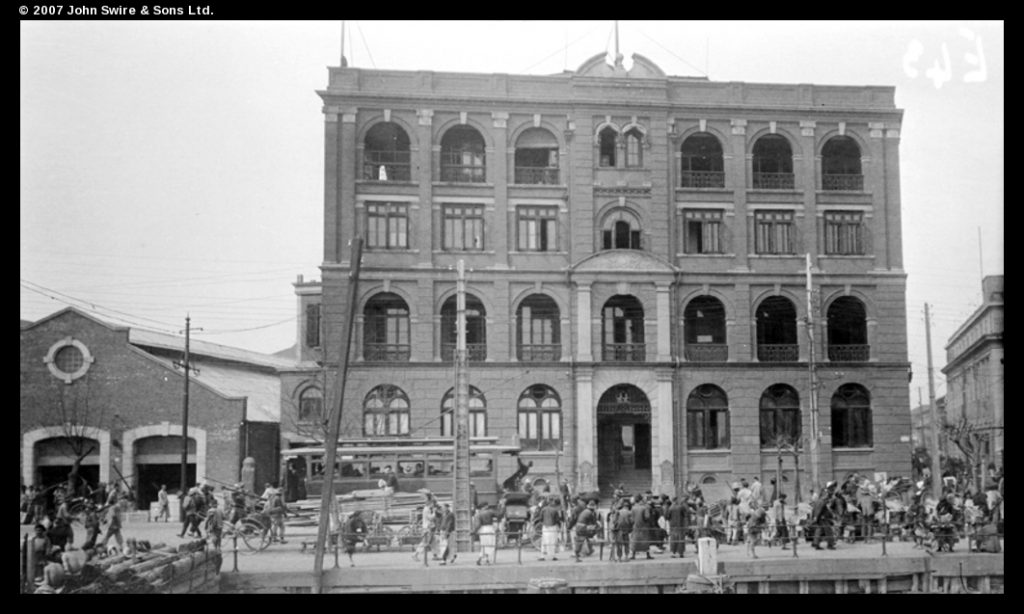 Today we take it for granted that almost wherever we are in the world we can communicate in seconds, by email, text and social media or, if needs must, by telephone! But how did businesses like John Swire & Sons share vital, even confidential messages across continents, seas and whilst aboard ships a century ago? Ocean travel was long, isolating and arduous, as shown by this fascinating isochronic map published online recently by The Economist.

Traditional post was, of course, inefficient and slow and certainly not viable for any news or business decision requiring urgent attention. Telegraph machines were introduced in the latter part of the nineteenth century, but it took time for them to become commonplace. Charged per character cables were an expensive option, even when reduced to the briefest of messages, so gradually it became the norm to encode them and replace whole phrases with one word ciphers.

Codes available on the market did not have the very specific phrases needed to Butterfield & Swire, who could need to share information about pirates, tonnage or typhoons. A private code had the additional benefit of keeping confidential memos secure, so in the 1920’s Butterfield and Swire invested a huge sum into development of their own secret code. An enormous £6,583 later, (£200,000 today!) 250 volumes of the Butterfield and Swire Shipping Code were printed and put into circulation across the business.

Butterfield and Swire’s code was based on five-letter phrase ciphers covering every eventuality. From “lagbu” “Act of God’, to “uzvap” – “Instruct the captain to drive his ship at full speed”. Plain language could be combined with the code, but at a cost. Each code book was emblazoned with ‘Must you wire? Wont a letter do?’ to put off the wasteful and frivolous messages that so irritated the director, now John Kidston ‘Jock’ Swire. 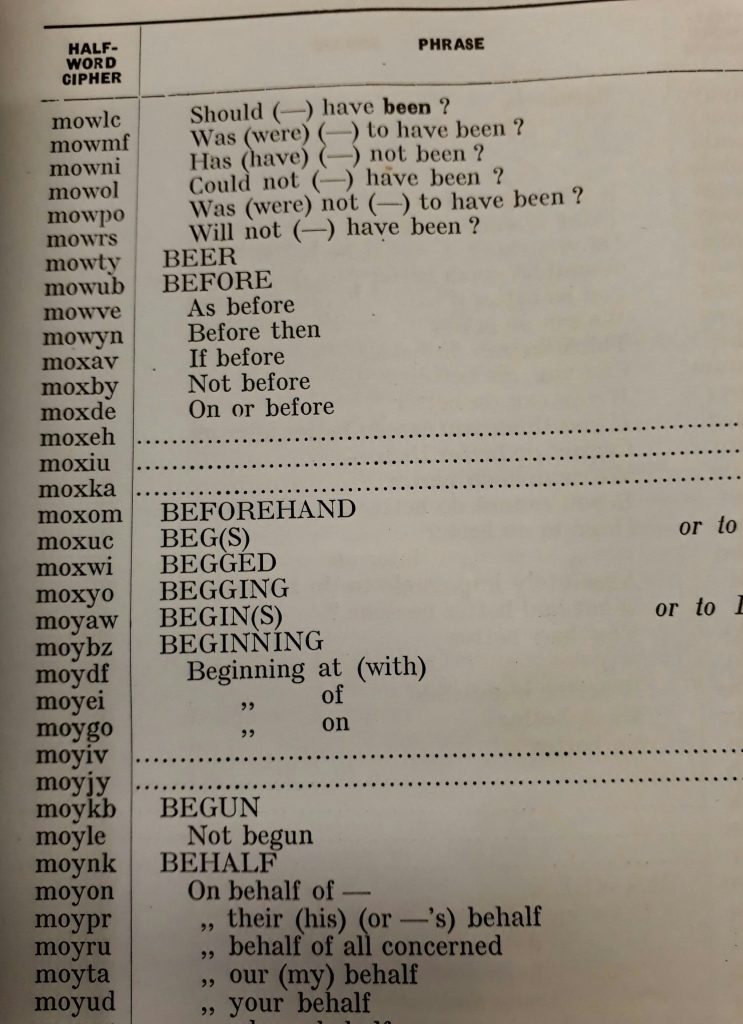 A page from the Butterfield & Swire shipping code, commissioned in the 1920s for use on board ships and steamers, showing the all important cipher for ‘BEER’!

There was no room for pleasantries. A cipher for ‘please’ did not even exist. But the temptation to manipulate the codes for comedy value was too hard for some employees to resist. Phrases such as “mohnu” – “Left bar this morning” and “riosy” – “will not call at yours unless decidedly better inducement” were often bandied between ports. Some Swire men even had a reputation of knowing the entire code off by heart! 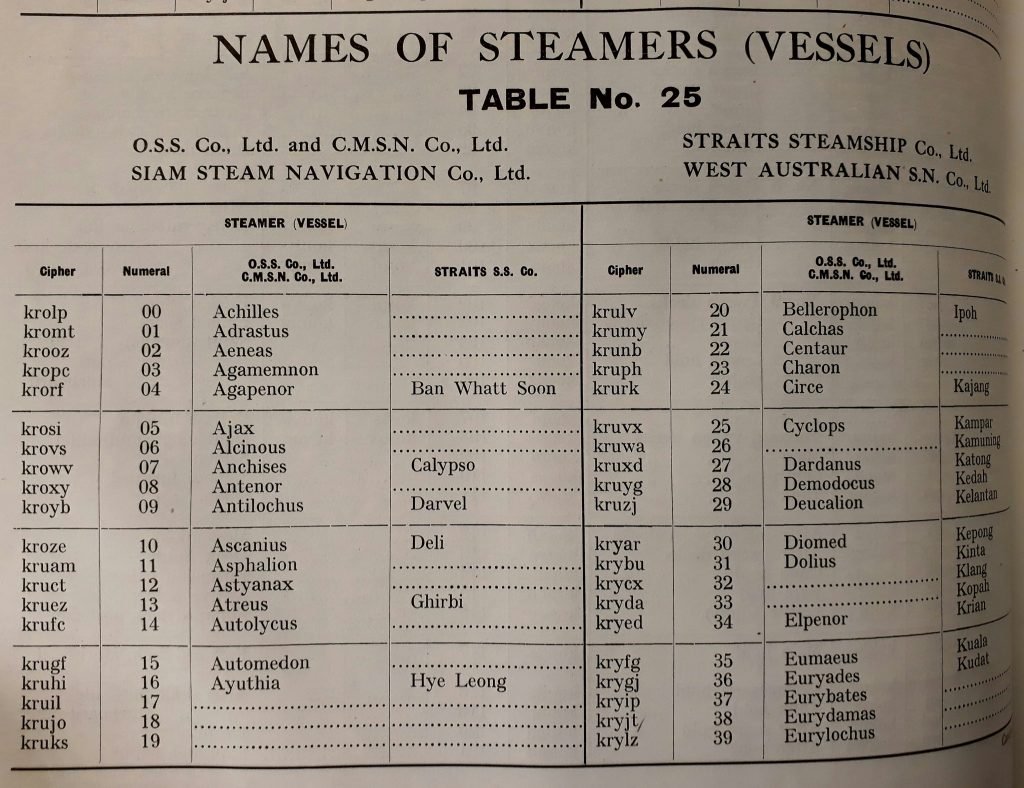 Page of ciphers used for the Greek-inspired Steamers’ names in the Butterfield & Swire Code.

The arrival of the fax machine heralded the demise of Butterfield and Swire’s Shipping Code in the 1980s. But even 90 years on, it has left a legacy. A weighty volume sits open and in pride of place at Swire House, Buckingham Gate and another is preserved and made available to researchers at SOAS Archives and Special Collections. 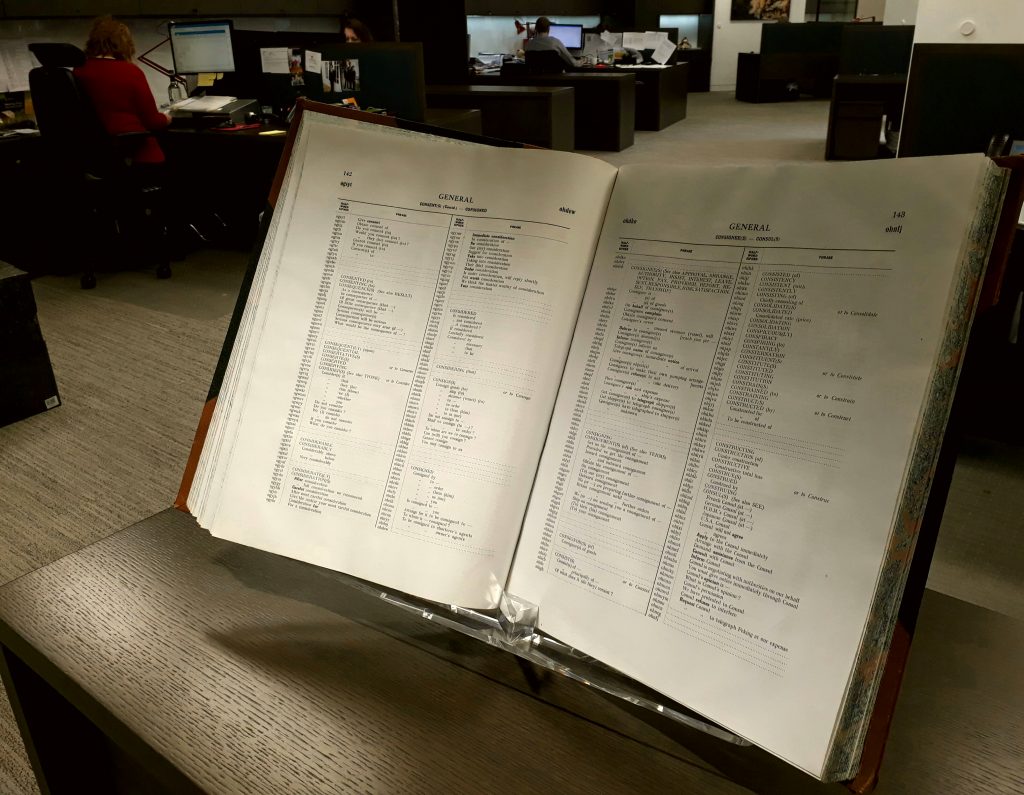 One of the Butterfield & Swire Shipping Code Volumes on display at Swire House, London.