Born in North London, in 1902, Gladys Aylward worked as a housemaid from the age of 14. In 1925, she became convinced that she had received God’s calling to spread his word in China after attending an evangelical meeting. She was refused missionary service in China by the China Inland Mission Centre in London, for failing their examinations. In October 1930, Gladys realized her ambition when she went to Yangchen [Yancheng],China, as an independent missionary, to join an elderly missionary, Mrs. Jeannie Lawson. 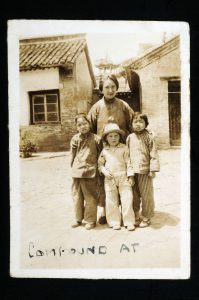 Gladys Aylward with children in front of the compound, 1936

For the purpose of preaching, Gladys and Mrs Lawson set up an inn called The Inn of Eight Happiness. Besides offering food and lodging to the travellers, they also took the opportunity to preach the gospel to their guests hoping for them to spread it through the entire province. The following year, when Mrs Lawson died, Gladys was left to run the business alone. 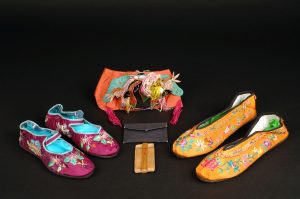 Artefacts collected by Gladys Aylward during her time in China, c. 1936

In her missionary career, Gladys opened centres where the poor and disabled were cared for. She also became a foster mother to many orphans, including children who had lost their parents during the civil war and the Japanese invasion. She was also instrumental in other social affairs and gave advice on many occasions to the Mandarin of Yangchen [Yancheng]. In 1936, she received her certificate to become a Chinese citizen.

During her time at Yangchen [Yancheng] Aylward was appointed as a local foot inspector and tasked with removing the bindings from the feet of local female children’s feet. 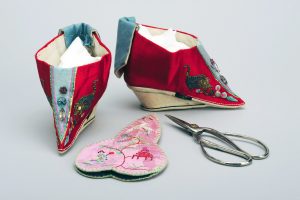 Slippers for bound feet and scissors used by Aylward to remove bindings, c. 1936

During the Spring of 1938, Gladys learned that she was listed by the invading Japanese authorities as a spy and a wanted woman. Realising that the lives of the children in the orphanage were now at risk, she led them on a difficult journey through the mountains to the safety of the Shensi [Shaanxi] province, where she was taken ill with typhus fever for several days.

As her health gradually improved, she started a Christian church in Sian [Xi’an] and worked elsewhere, including a settlement for lepers in Szechuan [Sichuan]. Her health was permanently impaired by injuries received during the war. In 1947, she returned to England for an operation and remained there, also preaching.

Miss Gladys Aylward died on 3rd January 1970. Her life was the basis of the 1959 film, ‘The Inn of the Sixth Happiness’ starring Ingrid Bergman.