The China Association was a mercantile body, formed to represent the interests of those concerned with trade to China, Hong Kong and Japan. Working closely alongside the London Chamber of Commerce, local Chambers, the Federation of British Industries and the Foreign Office, the Association took on the grievances of British traders in China and presented these to the British government and the Chinese authorities. 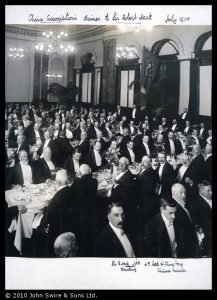 The Association was created following a growing demand in the 1880s for a representative body to be set up that would be exclusively concerned with Anglo-Chinese affairs. This pressure grew in part from the increasing numbers of those returning from the East. These ‘Old China Hands’ as they referred to themselves had a strong sense of community and would gather together regularly to exchange stories of their time in China. It was during one of these meetings at the Thatched House Club in London that the seed of the idea for the China Association first took root on March 4, 1889. The China Association was formally constituted at a meeting held on 11 April 1889, and chaired initially by Sir Alfred Dent, a leading China merchant.

From the start, leadership of the Association was assumed by representatives of the larger China Houses and members of Parliament from the China block. Membership included representatives of the large China Houses such as John Swire & Sons; Jardine, Matheson & Co; Paton & Baldwins; and Shell Petroleum, in addition to Members of Parliament and retired colonial and military officials returned from service in the Far East. Membership quickly grew and by 1891 the China Association had over one hundred members. By 1895 this figure had increased to over 400. Between 1892 And 1893 invitations were sent out to British residents in Hong Kong,China and Japan to form branch associations. The Shanghai committee was constituted in December 1892, followed by Yokohama in the same year and Hong Kong in June 1893. 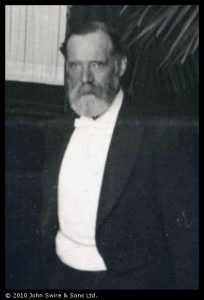 Much of the work of the China Association involved corresponding with the Foreign Office regarding commercial grievances in China. Further to this important intermediary role, the China Association also produced quarterly summaries of Chinese domestic and international affairs, translations of the Chinese press, and maintained regular contact with the Embassy in the promotion of British trade. Just ten years after its formation, key requests for intervention included backing for transit passes in China’s southern provinces; pressure for opening the West River for steam navigation and foreign trade; representation of concern over peace terms following the Sino-Japanese warm and their implications for British trade, and the threat of commercial competitions arising from the lease of Port Arthur to Russia.

The work of the China Association proved to be instrumental in securing British interests in China. In face of the Communist advance across China following World War II, the Association alerted the British government to the difficulties faced by British trade. In the years immediately following the war many British firms left China and the Association successfully brought about official action to ensure that British assets and concerns would be protected.

The China Association continues its work today, more recently being concerned in the handing of Hong Kong back to the Chinese in 1997.The Association continues to assist in the maintenance and development of good relations between China and Britain through continued sponsorship of the Sino-British Trade Council and co-operation with other Chinese bodies in London, including the Chinese embassy, China Society and the Great Britain China Centre.

The papers of the China Association were deposited at SOAS in 1978 and predominantly cover the period 1889-1961. They include  minutes and committee papers of the General Committee and Executive Committee; correspondence with the Foreign Office, Board of Trade, Sino-British Trade Council, Tientsin and Hong Kong Chambers of Commerce, Hong Kong Association and the British Consulate in Shanghai; annual reports (1889-1995), and separate items including the minutes and papers of the China Association’s School of Practical Chinese Endowment Fund (1908-1955).They also include papers relating to the British Chambers of Commerce in Hankow [Hankou] and Tientsin [Tianjin], the Hong Kong Association , the Sino-British Trade Council and the British Resident’s Association in Shanghai as well as some photographs and albums of press cuttings on China and Japan.