Butterfield and Swire, the Far Eastern trading company of John Swire and Sons [JS&S], was one of three companies established from the partnership of John and William Swire with R S Butterfield. The Shanghai Office opened on 1 January 1867 to handle JS& S textile shipments to China which had previously been consigned to Preston, Bruell & Co. Almost at once the firm’s interests were extended with the acquisition of the agency for Alfred Holt’s Blue Funnel Line and expansion into shipping, insurance and other fields was eventually to lead to the abandonment of textile shipments for which the company had originally been formed. Throughout the Nineteenth Century branches were opened and agencies established in ports in Japan, along the Yangtze River and down the China coast, including in 1870 the Hong Kong office which was accorded equal status with Shanghai. Expansion also took place into South East Asia, Australia and the Philippines until there were B& S offices or agents in most parts of the Far East. Although the partnership with Butterfield was dissolved in 1868 the firm retained its original title and gradually new partners were taken in by John Swire, particularly after his brother’s retirement in 1876. 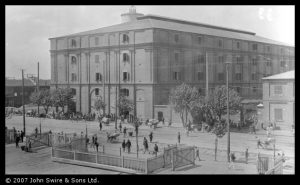 All JS&S interests in the East were placed under the direction of B&S and all correspondence from the East was conducted through the Hong Kong or Shanghai Head Offices. By the 1930s, apart from the management of JS&S concerns in the East such as China Navigation Company [CNCo] or the Taikoo Sugar Refinery [TSR]. B& S also held the important agencies of the Ocean Steamship Co and the China Mutual Steam Navigation Co as well as numerous insurance companies and other companies trading in the East. Despite the serious internal problems affecting China and severe Japanese competition the firm flourished until the Japanese invasion in 1941, when the outports offices and Hong Kong were taken over and closed down and the staff interned. The Shanghai office continued to function into 1942 and some accounts and letters were sent out with the British Embassy staff who were repatriated in the spring of 1942, shortly after the remaining B&S staff were interned. During the war the B&S office at Chungking [Chongqing] in Free China took over the remaining Chinese business of B&S while the main B&S presence in the Far East was maintained from Bombay [Mumbai] and Calcutta [Kolkata] by B&S (India). The Hong Kong and Shanghai Offices were reopened in the autumn of 1945 and the outports gradually as business resumed and B&S property was returned from the Japanese. 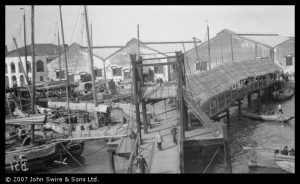 Under normal conditions the Hong Kong and Shanghai Head Offices divided the various B&S responsibilities between them, although maintaining consultation on issues involving both. Shanghai controlled B&S and CNCo branches, business and property in Shanghai, along the Yangtze River and in coastal ports north of Ningpo [Ningbo], as well as the management of the Orient Paint, Colour and Varnish Co and the Tientsin Lighter Co. Hong Kong dealt with B& S and CNCo branches and agencies on the South China coast, in Indo-China, Siam, the Philippines and the Straits, and with the management of the Dockyard and Refinery. It was also the senior Blue Funnel Agency in the East, dealing direct with Holt’s in Liverpool on all matters including the routing of homeward loading vessels, and sending copies of the correspondence to Swire’s in London. Eastern staff postings, pay and leave arrangements for JS&S owned concerns were discussed by the Hong Kong and Shanghai Managers before joint recommendations were sent to London for final decision. The daily running of the firms Taikoo Dockyard & Engineering Company, Taikoo Sugar Refinery and Orient Paint, Colour & Varnish Co. were, however in the hands of works and factory managers rather than the responsibility of B&S although all overall policy and management recommendations were made and put forward to London by the relevant B&S office. 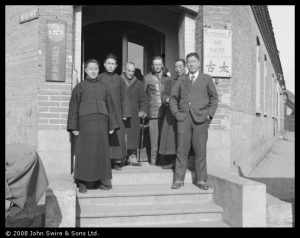 Both Head Offices were organised on the same basic structure as the London Office; the Outer Office being divided into sections dealing with particular interests and specialities and a Private Office with a Manager and assistants. The Hong Kong and Shanghai Managers wielded considerable power, all communications with London being conducted through them and their opinions were respected by the London Office. J S Swire took first William Lang, the head in Shanghai, and then J H Scott and Edwin Mackintosh as partners and these three men controlled the Eastern end for many years. Lang retired in 1888 and Scott and Mackintosh returned to Britain in the 1890s and their replacements were not taken in as partners as they had been but later in the Twentieth Century it became practice to appoint one Director from the Eastern staff who had had experience as Manager in Hong Kong or Shanghai. 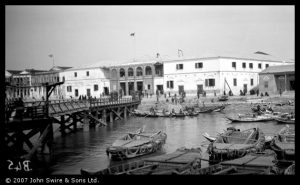 Swire continued to use the Butterfield name to manage its interests in Hong Kong and China until 1974  when it was renamed John Swire & Sons, Hong Kong in line with the UK parent company.

Almost every record series within the Swire Archive contains material relating to B&S. There is a great deal of correspondence between John Swire & Sons head office in London and the offices of Butterfield & Swire in Shanghai and Hong Kong regarding the routine management and running of businesses in the East.  A number of series of records focus specifically on the organisation of B&S itself, and these include accounts and finance records, staff and property records. Unfortunately the majority of the Eastern records of Butterfield & Swire were lost during the Japanese occupation during the Second World War, but on the whole the correspondence series are an important, if incomplete, record of the functioning of the B&S organisation within China between 1867 and 1980.

The images used in this post are from the George Warren Swire photograph collection which was digitised by Bristol University in 2008 as part of the Historical Photographs of China project.