John Swire may have established the firm of John Swire & Sons, but it was his son, John Samuel Swire, known as ‘the Senior’ who can be credited with laying the foundations of the business we know today.

He was just twenty one when he took control of his father’s company, but it was clear that he had inherited his father’s work ethic and shrewdness along with a great sense of adventure, setting out for America in 1849, possibly to try his hand at gold prospecting.

After his father’s death, merchant activity was reduced, and the company concentrated its efforts more towards acting as shipping agents.

in 1851, following his 21st birthday, William Hudson Swire, brother of John Samuel Swire, was admitted as a partner to the firm. Business was suffering and the pair looked further afield for new opportunities.

In 1854 John Samuel Swire left Liverpool and set sail for Australia aboard the White Star Clipper ‘spray of the Ocean’, a journey that was to take three months. Victoria was at the centre of a gold rush in the 1850s, and, seeing an opportunity, he established Swire Brothers in Melbourne in 1855 as an import/export business. Profits from the growing trade between the UK and Australia helped finance Swire’s expansion into into far eastern trades and ship owning over the next two decades.

John Samuel Swire left Australia in 1858, and married Helen Abigail Fairrie the following year. They had one son, John ‘Jack’ Swire, born on 22nd August 1861, but Helen sadly died when Jack was just a year old on May 5th 1862 aboard the ship Palestine, off the coast of Turkey.

Widowed with a young son, and with the American Civil War interrupting trade with the US, John Samuel Swire focused on the emerging China Trade as a new market for textiles and as a source of lucrative imports such as tea and silk.

In 1865 Swire Brothers took 2,500 of 156,000 shares issued by the Ocean Steamship Company (established by brothers Alfred and Phillip Holt) thereby expanding their shipping interests between the UK and China.

Upon realising that Preston, Bruell & Company (appointed as Swire’s agents in China) were having financial problems, John Samuel Swire resolved to open his own China House. He set off for Shanghai in 1866, and within a week had established Butterfield & Swire, named in part for his British partner, Richard Shackleton Butterfield, a Yorkshire merchant and mill owner. 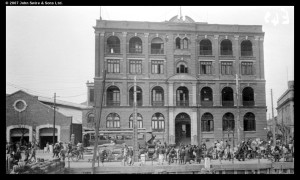 One of John Samuel Swire’s first achievements in Shanghai was the acquisition of the China agency for the Ocean Steamship Company. the fact that Holts appointed Butterfield & Swire as agents rather than one of the established Chinese Hongs is a measure of John Samuel Swire’s standing in shipping circles at the time. At the age of forty he had already established a reputation as a man of unquestionable integrity.

In 1868 a London office for John Swire & Sons was established, taking over from Liverpool as the head office in 1870.

In 1872, recognising the opportunity for a river boat service on the Yangtse, John Samuel Swire established the China Navigation Company using capital from Swire, Holt, and Scott’s shipbuilding, and engaged Butterfield & Swire as agents.

Other successful endeavours under the leadership of John Samuel Swire included the acquisition by Butterfield & Swire of the agency for several insurance companies, an interest that would remain central to the company for the next 120 years and the establishment of the Taikoo Sugar Refinery in 1884. 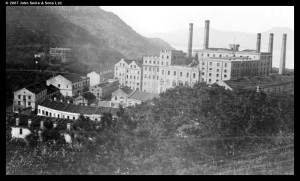 Almost twenty years after the death of his first wife, John Samuel Swire married Mary Warren, and they had a son, George Warren Swire in 1883.

John Samuel Swire died in December 1898 at the age of 72 leaving an impressive legacy behind him. He had forged new paths for the business started by his father  and created a strong, flexible, growing organization for surviving and future partners to build upon.