It’s been a busy few weeks here at SOAS Archives, but we are pleased to announce that the papers relating to Cathay Pacific Airways have been catalogued and are now available online. These form part of the Swire Collection, which we have blogged about before.
Today, Cathay Pacific Airways is one of the most successful and well-known airlines in the world, operating scheduled cargo and passenger services to more than 110 destinations around the world. Perhaps less well-known is that John Swire & Sons Ltd, historically best known in the East for shipping, have been a major shareholder of Cathay since its creation and continue to play an important management role today. 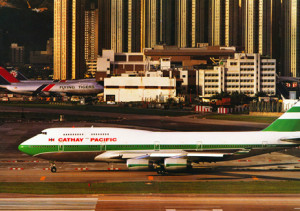 Cathay Pacific was founded by pilots, Roy Farrell and Sydney de Kantzow, on 24 September 1946 and registered in Hong Kong. In the same year, John – “Jock” – Kidston Swire (1893-1983), became Chairman of John Swire & Sons. Determined to find new opportunities for the firm and recognising that air transport was the key to the future, Jock Swire looked for ways of involving Swire in this industry. In 1947, he used Taikoo Dockyard‘s engineering skills to develop an aircraft maintenance facility at Hong Kong’s Kai Tak Airfield. This company, named Pacific Air Maintenance and Supply Company (PAMAS), would merge with rival Jardine Air Maintenance Company in 1950 to form Hong Kong Aircraft Engineering Company (HAECO) – today one of the world’s leaders in its field. 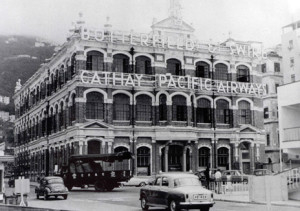 In 1948 Swire bought a management stake in Cathay Pacific Airways. By this time, the airline had grown from its original single US Army surplus DC3 (Dakota), ‘Betsy’, to a fleet of six DC3s and a Catalina flying boat. From then on, the growth of Hong Kong’s airline was to become Jock Swire’s special pride. In 1980 Cathay Pacific went international. At the end of a decade of rapid expansion, the airline acquired its first Boeing 747-200 ‘jumbo jet’ and the following year began a non-stop service to London. Cathay Pacific currently holds the title of the world’s third largest airline. 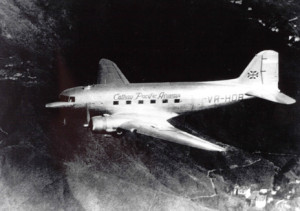 Sold in 1955, “Betsy” (the first Cathay aircraft) was discovered, almost 30 years later, flying cargo around the Australian outback. Cathay bought the aircraft back, repainted her in the original 1940s livery and returned her to Hong Kong. Today, “Betsy” hangs suspended from the ceiling at the Hong Kong Science Museum.
The papers held at SOAS reflect the involvement of John Swire & Sons in the development of Cathay Pacific. The records consist largely of correspondence sent between John Swire & Sons, London and managers and directors of Cathay Pacific in Hong Kong and relate to general management issues and policy, air traffic route development and staffing.