In continuation of the SOAS Centenary celebrations, catalogues for the minutes and papers of SOAS Boards and Committees have now been published on the SOAS Archive Catalogue.  In the first of a series of short blogs accompanying the release of each set of committee papers, the Corporate Records Manager and Archivist, David Ogden, looks at the history of the Governing Body. 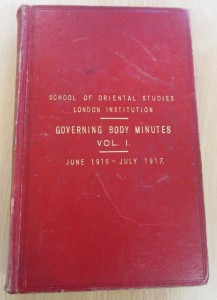 The Governing Body of SOAS (known as the School of Oriental Studies, The London Institution until 1937) first met on 22 June 1916. The meeting was presided over by the Right Honourable Arthur Henderson, President of the Board of Education, who opened with a short address before handing the Royal Charter of Incorporation within the University of London to the first Chairman, Sir John Prescott Hewett.  Hewett was appointed directly by the Crown and served for ten years. He was succeeded by Harry L Stephen, a London County Council appointment, who, like all subsequent Chairmen, served a five year term. The membership of the Governing Body has historically been constituted from nominated representatives of institutions with an interest in the mission and values of the School. Institutions nominating representatives have included the London County Council, London Chamber of Commerce, British Academy, and China Association. In the inter-war years, the Admiralty, Colonial Office, Ministry of Defence and the War Office also nominated members. His Majesty King George V was the first Patron of the School until his death in 1936, and successive monarchs have continued the Royal patronage of SOAS. 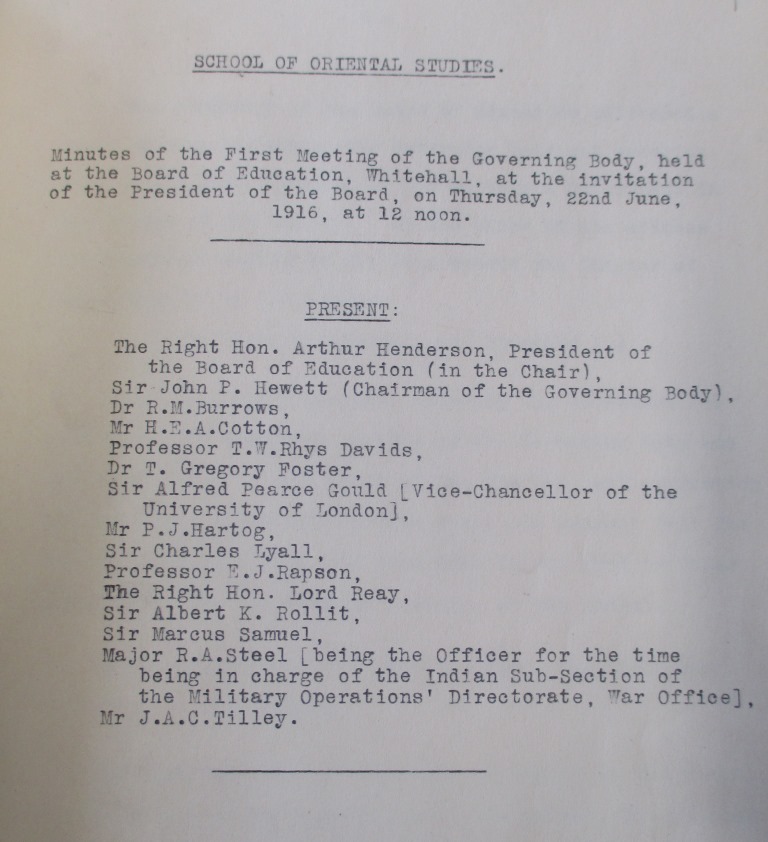 Names of those present at the first meeting of the Governing Body, Thursday 22nd June 1916. © SOAS

Readers should be aware that in accordance with the Data Protection Act (1998), the Governing Body minutes and papers are closed for a period of 30 years from the date of creation. Papers between 30 and 80 years old are largely accessible subject to the completion of a Data Protection Declaration by the reader, whilst papers over 80 years old are open. In some cases, papers over 30 years old may be closed because they contain sensitive data about identifiable subjects. In accordance with the University Publication Scheme, open minutes of the Governing Body since December 2003 are available on the SOAS website.

Where SOAS Minutes and Papers are open, they can be consulted in the Special Collections Reading Room, SOAS Library. Please see guidance on requesting material.

Original purposes of the School, as stated in the first volume of the Governing Body Minutes, 1916-1917. © SOAS