This week’s blog has been written by Mary Seeley, Subject Librarian (History & Religions, Ancient Near East, Semitics & Judaica) at SOAS.

The Hebraica Libraries Group is a joint forum of libraries in the field of Hebrew and Jewish Studies, ranging from major university collections in the UK such as SOAS, Oxford, Cambridge, UCL, and Southampton to specialist collections like the Wiener Library and private religious colleges and institutions such as the Montefiore Endowment Library and Leo Baeck College. 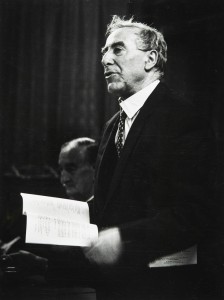 The Group held its AGM at SOAS on 15th April 2015, which included a visit to SOAS Archives. The programme included presentations on the history and development of the SOAS collections in Hebrew and Jewish studies by Mary Seeley and by former Librarian, Peter Salinger, on the life and work of the noted Yiddish poet and scholar, Abraham Nahum Stencl (1897-1983) and the acquisition by SOAS Library of Stencl’s personal archive. The group concluded the day with a viewing of items that had been selected from the archival collection representing key events in Stencl’s life, examples of his work and the efforts by SOAS scholars and other members of the academic community to preserve Stencl’s unique collection of papers and printed books.

Abraham Nahum Stencl (also called Avrom-Nokhem Shtensl) was born in 1897 into a long line of Hassidic rabbis at Tsheladzh (Czeladz) in Poland and was educated at the yeshiva at Sosnowiec. 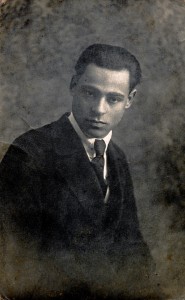 After receiving call-up papers for the Russian army in 1918, he left Poland for good, first of all living in the Netherlands – but by 1921 Stencl had settled in hedonistic Weimar-era Berlin, where he began to make his mark on the modernist literary scene – although his writings such as Un du bist Got (1924), always expressed the conflict between his traditional, religious roots and the secular world he now inhabited.

His political involvement led to his arrest by the Gestapo in 1936. He never discussed these harrowing events in later life, but fortuitously, he was released and was able to make his escape to England, where he soon settled in Whitechapel, which, for him, remained the last truly Yiddish shetl.

He wrote his poetry and other literary works mainly from a corner table in a nearby Lyons tea-shop and published the Yiddish journal Loshn un Lebn from his increasingly chaotic and overflowing council flat in Greatorex Street while doing much to promote Yiddish culture through his Literary Shabbat [Saturday]  Afternoons .

On his death in January 1983, there was a serious risk that the flat would just be cleared of its mountains of papers and books in order to be re-let – but thanks to the intervention of scholars such as Dr Dovid Katz of the Oxford Centre for Postgraduate Hebrew Studies and Professor Lewis Glinert (then lecturer in the Near and Middle East Department at SOAS), the archive was removed to safe storage whilst permission was sought from Stencl’s surviving relatives to donate the collection to a suitable Library. Mrs Miriam Becker, Stencl’s grand-niece was instrumental in obtaining the family’s approval and it was decided that the archive should go to a library in London due to Stencl’s fifty-year association with Whitechapel. Hence in September 1983 the collection was offered to and accepted by SOAS and 70 boxes of books, newspaper cuttings, correspondence and ephemera were delivered to the Library.

Mr Simmonite completed a card file for the book collection, identifying both gaps and duplicates in holdings. Stencl’s personal Library included works by both major figures in the Yiddish literary field such as Sholem Aleichem, Asch and Peretz, and less well -known figures such as Moyshe Oyved, Stencl’s connections to a wider mid-century European literary world are reflected in a variety of works by the innovative Else Lasker-Schuler, with whom Stencl had personal literary ties.

As well as Stencl’s own journal, Loshn un lebn, the collection contained significant runs of other notable Yiddish journals such as di Goldene keyt, di Tsukunft, Unzer tsayt, Dafke and Sovetish heymland and some rare items from the early years of the 20th century including English and European popular and classic fiction translated into Yiddish.

Excluding archival items, the printed material in the Stencl collection numbers over 2700 items. Peter Salinger subsequently ensured that all the printed material was entered onto the online library catalogue (from 1989). Many of the items now also include fields in the Hebrew script, and the Stencl family have recently given permission for the archival collection catalogue to be placed online on the SOAS Archive Catalogue.

Maurice Rosenbaum’s article about Stencl from the Guardian (1965) describes a meeting with the poet  – “he [Stencl] used Yiddish as if it were the universal language of tomorrow; he is superbly unconcerned with the interminable debate whether Yiddish is dying out or doomed or irrelevant to Jewish life today: it is enough that for over a thousand years it has been both the voice and the meeting place – the immaterial homeland – of his people.”