By Special Collections, SOAS Library|1st May 2015|Behind the scenes|0 comments

[Note: This blog may contain the names and images of deceased Aboriginal people]

“When the British ships arrived, there were about 270 different Aboriginal languages in Australia. Today, only about 60 or 70 are spoken on a daily basis. Of these, roughly half a dozen are considered to be strong and are being passed from adults to their children, according to John Hobson, a lecturer at Sydney University.” (Source: BBC news website, ‘Lost Aboriginal language revived’ by Phil Mercer (Sydney), consulted 29/4/2015) 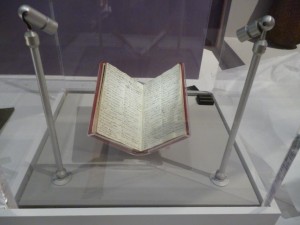 SOAS Archives contain some of the earliest surviving written and visual accounts of languages, cultures and narratives from across the world. Archives such as these can therefore unlock a vital social value and impact for First Nations communities in terms of language renewal, cultural revival and community memory and personal identity. Amongst such archives are the Dawes notebooks, which are believed to be the first written documentation of the Aboriginal language of Sydney, Dharuk (Darug).

Whilst archives can help empower language revitalization, the cultural resilience of the Dharuk community itself should never be underestimated:

“Many members of the Dharuk community live in and around Sydney. A few people retain some knowledge of the language, despite their people having suffered the longest history of colonisation, dispossession and displacement in Australia. Recently, efforts have begun to revive the language, supported by members of the community and by the NSW Department of Education and Training.” (Source: “The Notebooks of William Dawes on the Aboriginal Language of Sydney” website, consulted 29/4/2015)

Launching this week at the British Museum is a new exhibition titled: Indigenous Australia, which also aims to celebrate the cultural strength and resilience of both Aboriginal and Torres Strait Islander peoples.  SOAS, has for this purpose, recently loaned one of its treasures, volume 1 of the Dawes notebooks (Ref: MS 41645), and which you can now see on display. The exhibition is the first major exhibition in the UK to present a history of Indigenous Australia through objects.

William Dawes (1762-1836) was a Lieutenant (Royal Marines) and recognised astronomer on board the HMS Sirius, a flagship of the ‘First Fleet’ to New South Wales. The Indigenous people in this area are known as the Eora nation. Dawes studied and recorded the local language under the guidance of his most important teacher, Patyegarang – an Australian Aboriginal woman from the Cadigal people of the Eora nation who taught him the language of her people and is thought to be one of the first people to have taught an Aboriginal language to the early colonists. Patyegarang, at only 15 years of age was key to Dawes’ understanding and documentation of the Sydney Language. Patyegarang (often called ‘Patye’ by Dawes), therefore features prominently in the Dawes notebooks. “The notebooks record Patyegarang’s frequent visits to Dawes’ hut and their increasingly complex and intimate conversations. Expressions she shared with Dawes, such as Putuwá, suggest a warm and trusting relationship”. See further details at: http://www.williamdawes.org/patyegarang.html

Also of note regarding the research value of the notebooks:

“…He [Dawes] was the first to make extensive written records of any Australian language…Unlike others who collected simple wordlists for newly encountered items like weapons and animals, Dawes recorded conversational snippets that tell of the cultural and social contexts, personalities, and the actions and the feelings of the people he interacted with”. (Source: “The Notebooks of William Dawes on the Aboriginal Language of Sydney” website, consulted 29/4/2015)

Soon after Dawes left Australia in 1791 his notebooks came into the possession of the Orientalist and linguist William Marsden (1754–1836). When part of the Marsden collection was eventually transferred from King’s College to the newly-opened School of Oriental and African Studies (SOAS) in 1916, the Dawes notebooks came with it.

Their importance was only recognised in 1972, when they were listed by an Australian, Phyllis Mander-Jones in Manuscripts in the British Isles relating to Australia, New Zealand, and the Pacific, and therefore came to the attention of Australian linguists. Since then they have continued to attract the interest of linguists, historians, and Aboriginal community members, and have now become part of both popular culture in novels, drama, dance storytelling and documentaries.

Despite his repeated requests to remain, Dawes was never granted leave to remain as a settler in Australia and was sent back to England in 1791. Little more is known of what became of Patyegarang. Together, Patyegarang and Dawes helped to bring to the forefront a first-time European understanding of the diversity of languages and cultures amongst Aboriginal peoples across Australia. The notebooks themselves will always be widely regarded a “unique and enduring documentation of the language of Sydney and its people.”

Further details of the notebooks can be found on the SOAS Archive catalogue, as can digitised versions of the notebooks themselves, with accompanying translations and commentary available at:  http://www.williamdawes.org/index.html

“The Notebooks of William Dawes on the Aboriginal Language of Sydney” website, consulted 29/4/2015, http://www.williamdawes.org (A digital copy of the Dawes manuscript is available via the website. This website is presented as a homage to the Sydney Aboriginal people’s knowledge, culture, and land in 1788–1791 — and still very much alive today. It is also presented in tribute to William Dawes’ skills and humanity. The website results from a collaboration between the Hans Rausing Endangered Languages Project, SOAS and SOAS Archives and Special Collections. Funding and resources for the project were provided by the Hans Rausing Endangered Languages Project, SOAS, and Aboriginal Affairs NSW).