To celebrate Women’s History Month 2015, the campaign to raise the profile of women’s history and to champion women of the past, we will be highlighting a number of historical collections held by SOAS Archives which reveal the contributions of women to events in history and contemporary society. To mark International Women’s Day, we look today at the personal papers of Diane Noakes (1911-1983), anticolonialist and labour movement activist. 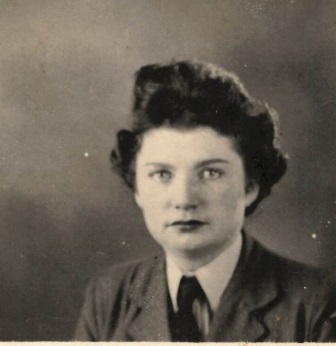 Mary (Diane) Elizabeth Bixby (afterwards Noakes) was born in 1911 in Mile End, East London. She had a number of early secretarial jobs, including working for the Toynbee Hall Settlement. In 1941 she volunteered into the Women’s Royal Air Force, where she carried out welfare, educational and administrative duties, attaining the position of Sergeant. Following the end of the Second World War, she trained as a teacher at Borthwick Teacher Training College, London, and worked from 1947-1949 at the Peckham Secondary School for Girls.

Diane Noakes was active in the labour and anticolonialist movements. She became Secretary of the International Sub-Committee of the Congress of Peoples Against Imperialism (COPAI). COPAI was founded in 1948, as an Anglo-French anticolonialist campaign group. It was closely linked in the UK to the Independent Labour Party (ILP), particularly the leading ILP activist Fenner Brockway. COPAI later amalgamated with other UK organisations to form the Movement for Colonial Freedom in 1954 (the MCF archive is also available here at SOAS Archives).

In 1951, Diane Noakes travelled to British Protectorate of Uganda, on Brockway’s recommendation, to assist the Federation of Partnerships of Uganda African Farmers (FPUAF), an agricultural cooperative movement headed by Ignatius K. Musaazi. The FPUAF had been established following the banning of the Uganda African Farmers Union by the British colonial administration in 1949. The FPUAF later formed the core of the Uganda National Congress, the first national political party in colonial-era Uganda, founded by Musaazi in 1952. Noakes helped the FPUAF reach an agreement with the colonial administration over disputed rights to cotton ginning. She was particularly involved in assisting the FPUAF cooperative movement in Masaka district, Central Uganda. She helped establish the Abalini Cooperative for farmers in Masaka and was involved in the founding a school and clinic, and a weaving factory for women. Noakes was later involved with the establishment of the Uganda Children’s Welfare Society and appointed to the position of Executive Secretary of the Central Council of the Indian Associations in Uganda. 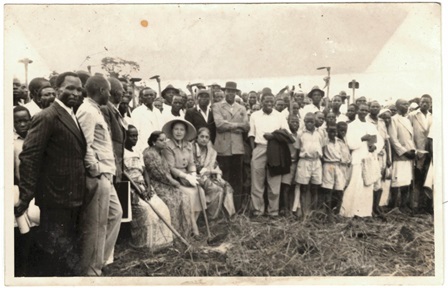 Following her return to the UK in 1958, Noakes gained employment at the Kellogg International Corporation in London, and advanced to the position of Assistant Metallurgist. She was involved with the running of the Kellogg Corporation photography club. Politically, she was a member of the Labour Party and Political Education Officer for Thornton ward, Lambeth, London. She retired in 1971 and bought a house near Shap, in the Lake District, where amongst other things she campaigned for ‘Cumbrians for Peace’. Noakes died in November 1983.

The personal papers of Diane Noakes (Ref. PP MS 56) are available to researchers at SOAS Archives. They comprise: diaries, letters and correspondence relating to her life in England and her work in Uganda. The collection has been arranged into the following sections: diaries; correspondence; materials relating to Uganda; Labour Party papers; miscellaneous papers, and photographs. 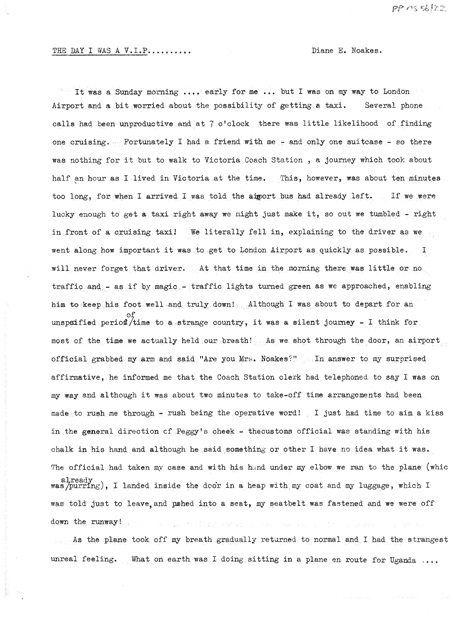 SOAS Archives is part of SOAS Library (the UK’s National Research Library for Asia, Africa and the Middle East). SOAS Archives welcomes visits from academic staff, students, and the general public who wish to consult our collections.