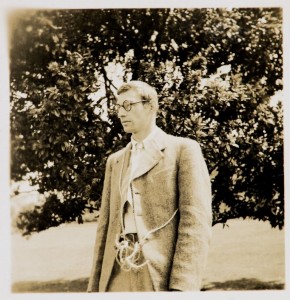 Tom Pearson Cromwell was born in 1909. He joined the Colonial Administrative Service in 1932. After serving as a cadet for seven years, he was assigned to New Zealand, before being appointed district officer of Christmas Island, a remote Indian Ocean island which was administratively part of the British controlled Straits Settlements. In March of 1942, after the fall of Malaya and Singapore to the Japanese, Cromwell was taken prisoner by mutinying garrison troops, until the arrival of a Japanese invasion force at the end of the month. Interned for the rest of the war at first on Christmas Island, and later in a series of locations in Indonesia and Malaya, he and other Christmas Island internees ended the war in Makassar, Sulawesi island.

Cromwell’s papers held by SOAS Archives, mainly comprise letters written to his parents (1926-1964). There are also some photographs taken in Malaya of Tom, his wife Betty, local people, flora, fauna, etc., as well as photographs and postcards from New Zealand, Christmas Island and notes and ephemera from his period of internment.

Cromwell’s time as District Officer of Christmas Island, from May 1941 until March 1942 is documented in his letters, at least until January 1942 when communication from the island became difficult. The letters from Christmas Island include descriptions of his responsibilities on this small British outpost. Eyebrow-raising to modern sensibilities perhaps, these responsibilities included management of the opium trade: “In the meantime the sales of chandu (opium) continue regularly to the coolies (the clerk does the actual sales) and I have to check his stocks, issue him with fresh stocks when he runs out, and check each individual sale” (PP MS 33, Box 6). 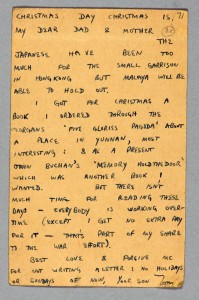 Concerns for family back in England and the progress of the war in Europe fill the letters, understandably, as well as concerns for the deteriorating situation in the East. Even after Pearl Harbour and the beginning of Japanese advance in Southeast Asia, Cromwell’s correspondence from ‘XI’ on Christmas Day shows a confidence that the island at least was not under threat: “We are safe enough here on Christmas Island, unless Admiral Tojo comes along in person with his whole fleet” (PP MS 33 Box 6).

From January onwards, communication difficulties saw Cromwell’s letters dry up. Christmas Island would fall to the Japanese following a revolt by Indian soldiers of the Island’s garrison.

Cromwell comments briefly on the circumstances in his post internment interrogation: “Held in custody from 11.3.42 by mutineers of Hong Kong and Singapore Artillery X.I Det. & of Straits Settlements Sikh police” (PP MS 33 Box 12). 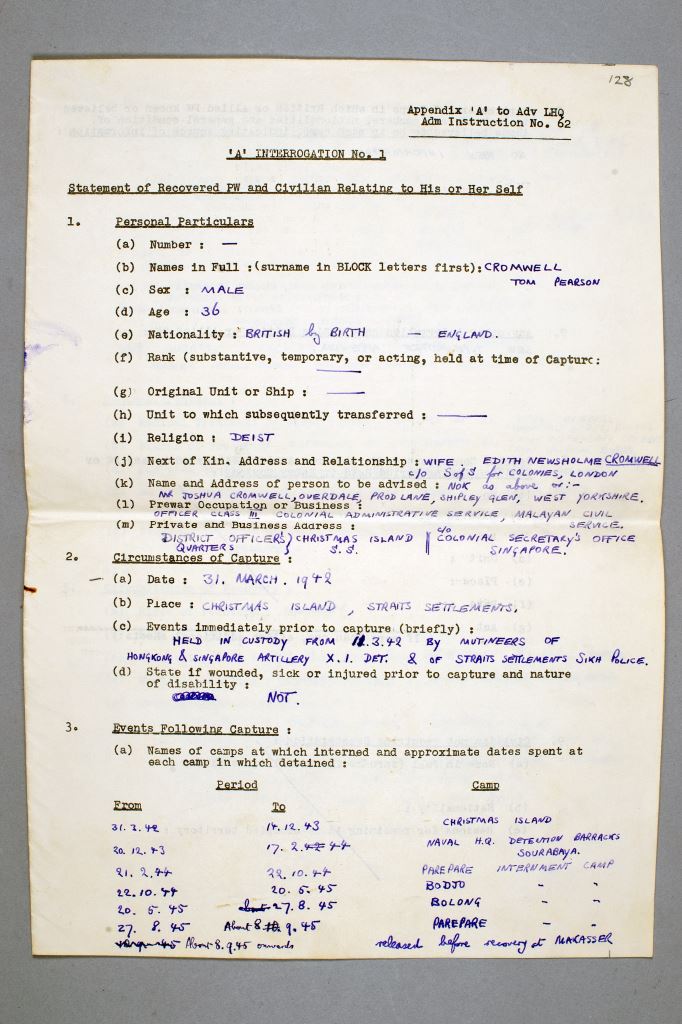 Cromwell and other British civilians were interned first of all on Christmas Island itself, and late in 1943 transferred to Java, then Sulawesi. Cromwell’s files include notes from his period of internment, written on anything to hand, and documenting his efforts to pass the time by learning Dutch, the language of many of his fellow internees on Sulawesi. In addition, ephemera such as Japanese occupation banknotes, and two small battered Union Jacks have been preserved in the collection (PP MS 33 Box 12)

After recovery by Allied forces in Makassar, Cromwell resumed his prolific correspondence, and in addition to his letters, the archive includes some fascinating official documents concerning his internment, most notably his debriefing ‘interrogation’, containing a brief account in his own words of internment conditions and interaction with the Japanese:

“‘When internees were asked to work unloading ships at Parepare there was no direct pressure, and most who went to work went because  they wished to – I among them – it was a break from the prison camp and we earned money for the camp” (PP MS 33 Box 12).

After the war, Cromwell would remain in Southeast Asia, holding government posts in Malaya, Sarawak and Singapore, until his retirement in 1960.

The papers of Thomas Cromwell can be seen in the Special Collections Reading Room.