As SOAS marks Black History Month we continue to highlight historical collections held by SOAS Archives, which reveal the long-standing Black presence in the UK, as well as the contributions and achievements of Black peoples in local, national and international arenas. This week we look at the archives of africa95, a registered company with charitable status founded in 1992 to organise a nationwide season of the arts of Africa to be held in the UK in the last quarter of 1995. Events included visual and performing arts, cinema, literature, music and public debate, as well as programmes on BBC television and radio. 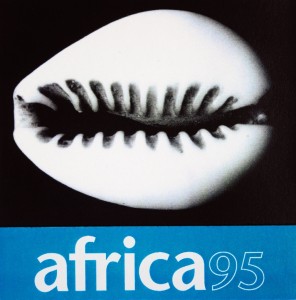 The africa95 archive was deposited with SOAS in 1996, and includes material from festival administrators, producers, artists and performers, as well as educational and outreach material. The institutional archive is supplemented by individual donations from organisers Robert Loder and Clementine Deliss.

An important aim of the season was to encourage discussion and debate around the arts of Africa. In particular, the flagship exhibition at the Royal Academy, Africa: The Art of a Continent. (Reference: africa95, Boxes 28 & 29) attracted a good deal of comment and criticism concerning its politics of representation. Much of the critical reaction considered that the attempt to represent the art of a whole continent in a single exhibition was highly problematic in itself. Many have also drawn attention to the perceived irony that many of the exhibits at the Royal Academy originally left Africa during the colonial period, and were the property of European and North American collectors and institutions.

The debates around issues of representation, as reflected in the archive, will be useful to researchers interested in museology and the politics of arts management and curation.

The visual arts programme saw many other important exhibitions, on a variety of scales, such as Vital: Three Contemporary African Artists at the Tate Gallery Liverpool; Technology, Tradition and Lurex: The Art of African Textiles at the Barbican Art Gallery; Siyawela: Love, Loss and Liberation in Art from South Africa at Birmingham Museum and Art Gallery, and Seven Stories About Modern Art in Africa at the Whitechapel Gallery, London.

The archive’s considerable collection of news cuttings documents contemporary reactions to the season: of particular interest are African reactions, with cuttings from a variety of English and French language publications. One highlight is the coverage given to africa95 in the pages of Festac News, a newspaper based in Festac Town, the town originally built to accommodate participants in the Second World Festival of Black Arts, known as FESTAC ’77 (Reference: africa95, Box 28)

Among the many research files in the archive, there are reports into the situation of non-western art and artists in Europe, such as Non Western Arts Activity in Belgium, by Shweta Otiv, as well as catalogues, programmes and press cuttings relating to exhibitions of African art in the UK and Europe in years prior to africa95 (Reference: africa95, Box 2) 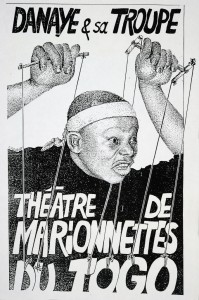 As well as correspondence, publicity materials, photographs from exhibitions and performances which took place during the africa95 season, the archive also contains research files on artists and performers many of whom would not ultimately feature in the season. One example is the Compagnie Danaye Theatre de Marionettes du Togo, a long running puppet theatre company based in Lomé, Togo, under the direction of founder Danaye Kanlanfeï, which has given performances worldwide : the archive contains correspondence, publicity and contemporary press cuttings relating to the company, as well as photographs, giving an insight into the history and development of the company (Reference: africa95, Box 41).

The research files for the visual arts strand contain portfolios, biographies and photographs of the work of many African artists, a potentially valuable resource for researchers interested in the contemporary art of Africa.

One of the most high profile events of the theatre programme was the world premiere performance of Wole Soyinka’s play Beatification of Area Boy at the West Yorkshire Playhouse in Leeds. The archive contains correspondence, including a letter outlining Soyinka’s desire to direct the play, and for it to premiere in Nigeria- neither of which came to fruition. It also contains a draft typescript of the play, under its original title, Nupitals of Area Boy. Early in the run of the play, news broke of the sentencing to death of the playwright and Ogoni activist Ken Saro-Wiwa, along with other activists: himself a political exile from the Nigerian military regime, the executions affected Soyinka deeply, and the final night of the play’s run was turned into a benefit and celebration of Saro-Wiwa’s life: the archive contains the text of a speech written by Soyinka for the occasion, and read by his son. (Reference: africa95, Box 45)

The africa95 collection is outlined on the SOAS Archive catalogue.  An unpublished handlist is available to download as a pdf from the Archive Catalogue, and is also available for consultation in the Special Collections Reading Room .

Academic and critical reaction to africa95: