Pirates, Shipping and Merchants on the North China Coast

Home/Collections & Research/Pirates, Shipping and Merchants on the North China Coast

Pirates, Shipping and Merchants on the North China Coast

Okay, so we are going back in time a little bit by blogging about this exhibition which we created in October 2012, but it is International ‘Talk Like a Pirate Day’!

We included some of these items in our recent display of material as part of our Annual Open Day and they went down a storm (maritime related punning purely accidental!), so we thought you might like to hear more about the original event.

By the early 1900’s the South China Sea was well known and reported on for acts of piracy against merchant shipping in it’s busy waterways. The exhibition of material drawn from the archives of John Swires & Sons looked at the piracy of merchant shipping on the North China coast and that of the SS Nanchang II on March 29th1933. Prior to the Nanchang affair, piracy was unknown along the northern coast of China. The event was widely reported on in the press of the time with accounts of how the British officers and 37 Chinese crewmen on board the Nanchang were caught off guard when two seemingly-innocent fishing junks suddenly swept alongside, disgorging a motley assortment of armed pirates, who swarmed on deck firing indiscriminately. 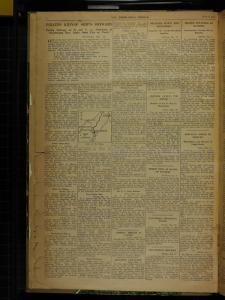 Account of the piracy of the Nanchang in 1933. Copyright SOAS

The pirates quickly looted the cabins of anything they could carry away and returned to their junks – taking with them the four remaining British officers (First Officer Clifford Johnson, Second Officer Bill Hargrave, Second Engineer Archie Blue, and Third Engineer Frank Pears). The attack lasted twenty minutes. Its after-effects were to last five long months and the Nanchang incident was to become the most celebrated piracy the China coast had ever known. A diary account of their capture and period of imprisonment was kept by Clifford Johnson before their subsequent ransom and release after five months following the payment of a ransom, and the release of 26 Chinese prisoners, relatives of one of the bandits. 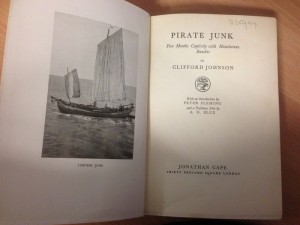 If the bandits want to know what’s in this letter, tell them it’s about your relatives’.  Li Wen Chi [a bandit] stood by and asked what the letter said. I collapsed and lay with my head in my hands and said that my father had died of grief at my capture. They [the bandits] came round and sympathized. One brought me an extra ping [dough pancake], another the stub end of a cigarette. Blue and Hargreave wished that their fathers had died

The display of material from the Swire collection included letters between John Swire & Sons, the pirates and the captured crew giving details of the conditions the men were held in as well as the pirate’s demands, and negotiations for their release. 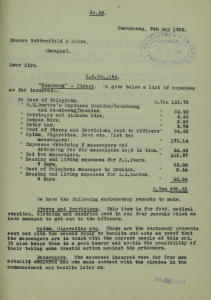 It also included photographs of the officers, immediately following their release as well as other images of other pirated vessels, anti-piracy measures and captured pirates. 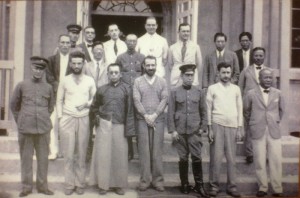 It’s a gripping tale which fortunately ended well, and a fascinating insight into the hidden stories that can be found in business archives. If you have any comments, or queries, drop us a line at: special.collections@soas.ac.uk