The Man Who Wouldn’t Run on a Sunday: Eric Liddell in the SOAS Archives

Home/Collections & Research/The Man Who Wouldn’t Run on a Sunday: Eric Liddell in the SOAS Archives

The Man Who Wouldn’t Run on a Sunday: Eric Liddell in the SOAS Archives

As Scotland prepares for the closing ceremony of the Commonwealth Games 2014, our blog this week looks back on a famous Scottish sporting hero who appears in the SOAS Archive collections. 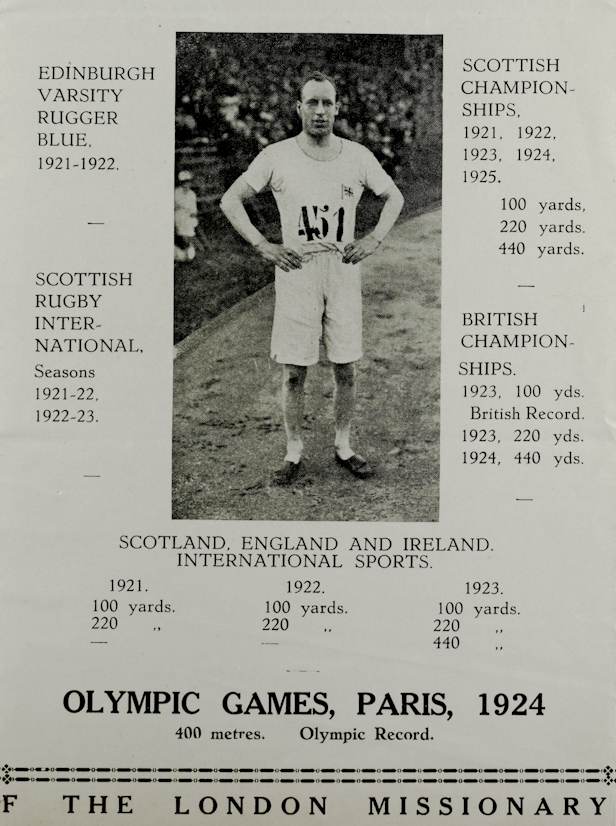 Eric Liddell achieved fame as an Olympic athlete whose life is chronicled in the 1981 film, Chariots of Fire. Born in Tientsin [Tianjin], China, 16 January 1902, to Scottish missionary parents, he was educated at the London Missionary Society School for Sons of Missionaries at Blackheath (later Eltham College), back in England. He graduated from Edinburgh University in 1924.

Throughout his time at Eltham and into the early 1920s, Eric excelled at sport and established himself as one of the country’s top runners, regularly winning the Scottish 100 and 220-yard sprinting titles, but also the 400-yard contests. He was also successful in British competition, winning the shorter sprint distances at Triangular International Contests (which showcased athletes from Scotland, England and Ireland). This success ensured his inclusion in the British Olympic squad which set sail for Paris in 1924.

Britain’s hopes were pinned on Eric Liddell and Harold Abrahams for the premier race of the Olympics, the 100 metres. However, a devout Christian, Liddell refused to run in the qualifying heats because they were held on a Sunday (Liddell instead spent the Sabbath preaching in the Scots Church in Paris), and was forced to withdraw from his best event. In the time that remained before the competition he trained instead for the 400 metres. He subsequently won bronze and gold medals in the 200 and 400 metre events respectively, setting a world record of 47.6 seconds for the 400 metres and causing sensational news headlines.

In 1925, at the peak of his athletic success, Eric Liddell chose to return to China as a teacher on the staff of the Anglo-Chinese College in Tientsin. His application to the London Missionary Society was accepted and in 1930 he was appointed as a missionary and regular member of staff, teaching science and athletics.

In 1937, he transferred to Siaochang [Xiaozhang], Hebei province, where his brother Robert was a mission doctor. There he was engaged in rural evangelism, travelling many miles in difficult terrain by bicycle and on foot, ministering to the needs of the surrounding villages. His family remained in Tientsin.

In 1941, as conditions in China deteriorated in the weeks before the bombing of Pearl Harbour, Eric arranged for his wife and daughters leave China. In 1942, he was placed under house arrest in Tientsin, and in March 1943 was taken prisoner by Japanese soldiers and imprisoned with fellow missionaries and other foreign nationals at Weihsien Internment Camp, Shantung. It was later revealed that Eric had refused an opportunity to leave the camp in a prisoner exchange negotiated by Winston Churchill, and instead gave his place to a pregnant woman.

In February 1945, Eric became ill with severe headaches. He died on 21 February, whilst still in the camp, aged only 43 years and only six months before the end of the War. He is buried in the Mausoleum of Martyrs in Shih Cha Chuang. 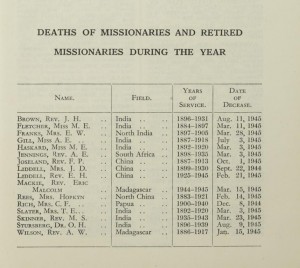 An exhibition of archival material relating to Eric Liddell from the archives of the London Missionary Society was held at the Brunei Gallery, SOAS, in 2012.