This month’s piece has been written by our guest blogger, Jiyeon Wood, Subject Librarian (Arts & Multi-Media), SOAS Library. It highlights one of a small number of historical artefacts held by SOAS Archives.

While I was researching the library’s special Chinese Art collection, I came across this remarkable fan. According to the records, this fan, donated to the Percival David Foundation, became part of the SOAS collection in 2009. 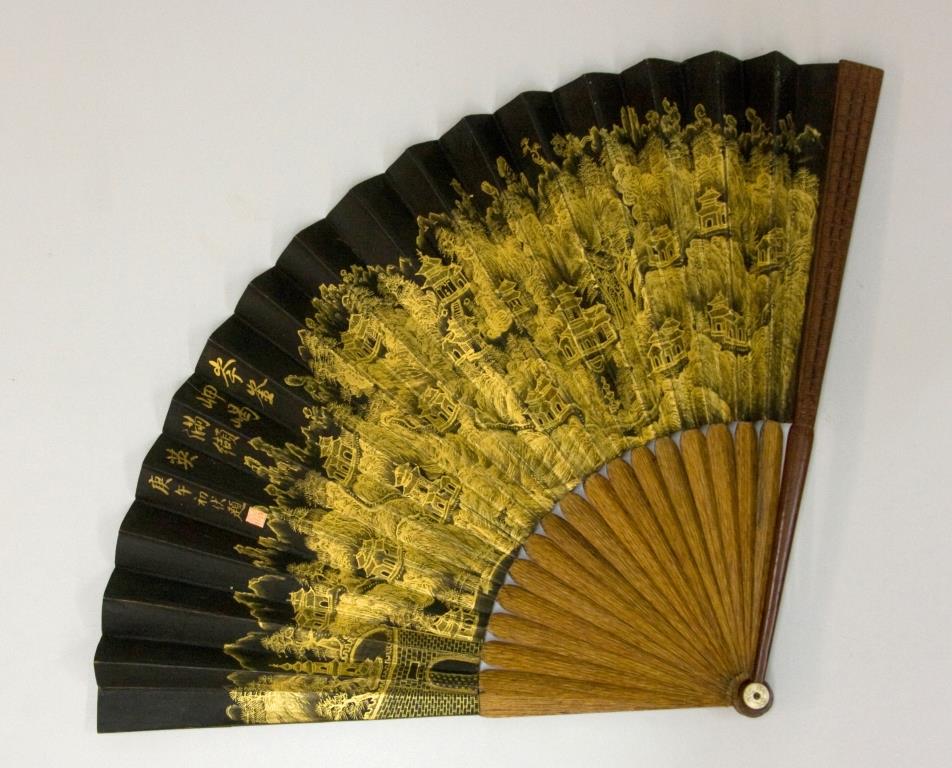 With its striking landscape picture in gold, this black fan bears an inscription of the Imperial Seal of Xuantong (1909-1912). Xuantong, better known as Puyi (1906-1967), the last Emperor of China, was tutored by an outstanding sinologist called Sir Reginald Fleming Johnston (1874-1938).

Johnston’s first encounter with 13-year-old Puyi was in 1919. By this time, Puyi had been living an isolated existence for over 10 years. Many books about Johnston show that he was incredibly fond of Puyi and influenced him in many ways.

After Johnston returned to U.K, he became one of the first Professors of Chinese at the School of Oriental Studies, teaching between 1931 and 1937. His friendship with Puyi was unknown to the world until Johnston published “Twilight in the Forbidden City” in 1934. Much later, their friendship drew public attention again when Bernardo Bertolucci made the film “The Last Emperor” in 1987, in which Peter O’Toole portrayed Johnston.

This fan was given to Johnston by the Emperor Puyi as a farewell gift on 15th September 1930, just before Johnston returned to the U.K. In “Twilight in the Forbidden City” Johnston said that the Emperor had personally inscribed the calligraphy of the two Chinese farewell poems. Without a doubt, this fan was one of Johnston’s proudest possessions. Johnston passed away in 1938. 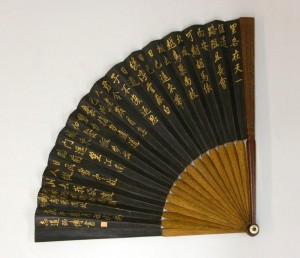 The road leads ever onward,

Thousands of miles will part us –

You at one end of the wide world, I at the other

Long and difficult is the journey –

Who knows when we shall meet again?

The birds of Yueh build their nests in southern trees.

Our farewells are said, we are far apart;

Already I grow weak with pining.

The sun is hidden by the drifting clouds,

The traveller journeys on, turning his head no more.

Thinking of you, I seem to have grown old.

The months have swiftly passed, a whole year has gone.

It is all over. There is no more to be said,

I must make myself strong for the strenuous days to come…

Out of the city’s eastern gate I go on foot,

To gaze longingly at the road that leads to far Kiangnan

On that day of storm and snow,

Here it was that we parted, and my friend went away.

But the river is deep and has no bridge.

Oh that we were a pair of herons,

That we could fly home together

(*There are various translations of these poems but I have chosen the version that Johnston used in his book “Twilight in the Forbidden City”.)

Puyi had a difficult life as a participant and a victim of the rapidly changing history of modern China. He implicated Johnston at the war crime trials of 1946, and portrayed him as a villain in his autobiography “From Emperor to citizen”, claiming he had lured him away from all that was best in Chinese culture and toward Western Imperialism. His motives for this are still unsure, but it is clear that Puyi’s last gift to Johnston not only captures the sorrow of a young man losing his beloved friend, but also the frustration of an Emperor watching his country change dramatically.

This item has reference MS 381195 and can be consulted in the Special Collections Reading Room. Requests should be made in advance to the Archivist at special.collections@soas.ac.uk