The Life and Afterlife of David Livingstone: Kuruman Mission & the Moffat family

The Life and Afterlife of David Livingstone: Kuruman Mission & the Moffat family

The Life and Afterlife of David Livingstone: exploring missionary archives is running at the Brunei Gallery, SOAS, until May 2014. This blog series highlights some of the fascinating stories and archives selected for the exhibition from the collections at SOAS Library. This blog looks at the broader historical context at the time of Livingstone’s arrival in Southern Africa.

“A View of Cape Town, Table Bay & Tygerberg,” in Travels in the Interior of Southern Africa, by William J. Burchell, Volume 1, 1822

With the British occupation in 1795, the Cape Colony emerged as an inviting mission field. Between 1799 and the 1840s, several hundred missionaries arrived and eighty mission stations, both inside and outside the Colony, were established. Though preceded by the Moravians, the London Missionary Society (LMS) would become the most prolific mission society at the Cape and the most politically active, campaigning on behalf of the indigenous Khoisan and amaXhosa. They were subsequently joined by the Rhenish, Glasgow, Wesleyan and Paris societies.

The London Missionary Society was founded in 1795. It was broadly non-denominational in scope, but very much Congregationalist in both outlook and membership. The first LMS mission to South Africa was dispatched in 1799, when Dr Johannes Vanderkemp arrived at the Cape with the express aim of working amongst the indigenous peoples. 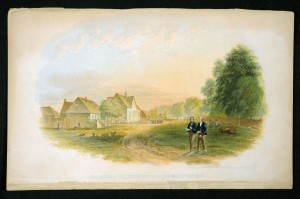 By the 1840s, the LMS South African mission had a number of mission stations from Cape Town to Kuruman, on the border with modern-day Botswana. Indeed, Kuruman was home to the pre-eminent missionary family of the region, into whom David Livingstone would marry in 1845: the Moffats. 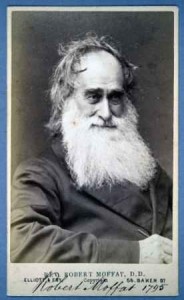 Robert Moffat (1795-1883) was a Scottish Congregational minister and missionary, who went to South Africa with the London Missionary Society in 1816. He was joined there two years later by his wife, Mary. In 1824 they founded the mission station at Kuruman, where they lived and worked amongst the baTswana until their return to Britain in 1870.

Livingstone’s wife, Mary (1821-1862), was the eldest child of Robert and Mary Moffat. They were married in 1845. Mary became an integral part of Livingstone’s mission, easing his path into potentially hostile regions and communities, teaching the local women and children, and giving birth to six children along the way. Mary joined her husband on his expedition to explore the Zambezi River in 1862, but died from malaria shortly afterwards. She was buried at Shupanga (Chupanga) on the banks of the Zambezi, on 27th April 1862. Very few of Mary’s own letters survive, but SOAS holds a small series, 1852-1855, written to the LMS directors during time spent in England away from her husband. 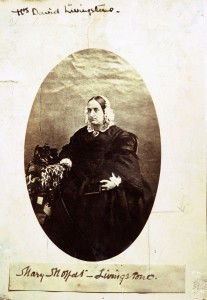